Skip to main content
Labels
Posted by Citizens Theatre May 06, 2014

Don't Put Your Mother on the Stage Mrs Worthington...

Loretta Scott is one of the 'supernumeries' in The Libertine, commonly called an 'extra'. Loretta had never acted on a professional stage before the opening night on Saturday 3 May, and as she says in her blog here, it is not something she will forget in a hurry!

See Loretta and the rest of the cast in The Libertine until Sat 24 May. Find out more about the play and book online. 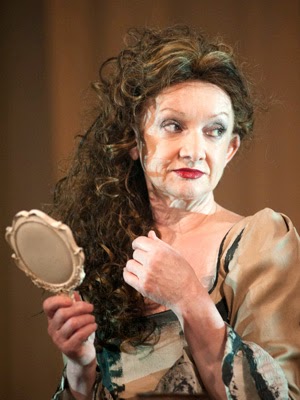 When my daughter Mary-Claire gave me classes at the Citizens Theatre Nightschool for my 60th birthday, neither of us could have anticipated this moment – my first night in front of an audience, performing in The Libertine. To have this fantastic opportunity to be involved in a Citizens performance with professional actors, and to build on the acting skills developed at Nightschool by working with Dominic Hill (Director) and Danielle McIlven (Assistant Director), well, it’s a bit of a dream come true...!


Last night was the preview of The Libertine and I stood in front of an audience for the first time on the stage at the Citizens. What a fantastic experience! I loved it! I loved the focussed anticipation and excitement throughout the dress rehearsal in the afternoon and its culmination in "Beginners to stage please... 5 minute call..."

I loved the first moment I walked onto the stage, albeit I was very nervous at that point. That's where the relationships forged during rehearsals come to your aid, fellow actors recognising what a special moment it is for you, probably remembering their first time too, and stand beside you, encouraging you... before you walk on...

The rest is a blur!

The lights fade and you simply get on with the performance. It has a momentum of its own. And that's an apt comment: no stopping to do something again, no interruptions to consider a movement or a line, you simply get on with it, trusting that you'll remember everything! And if something doesn't quite go according to plan, keep going and don't let it phase you! Confident (!?) that all the hard work of rehearsals and technical rehearsals will ensure you give your best.

One thing that rehearsals really brought home to me was how much of a team effort  being involved in performing the play would be. And not just in performing but in all the other crucial elements involved in delivering a performance to the public: the backstage parts, the costume department, the stage management part, the music, the movement/choreography, the lighting... All of these elements independent and interdependent!

And then it was over... the lights faded... and the applause came. The audience liked it (of course!) And I cannot describe the moment when I went back on stage with the other 4 extras and we took our bow before moving back to allow the audience to show their appreciation of the "real" actors. Maybe one day...

And now we head into three weeks of performances. But I’m pretty certain nothing will ever match the memory of that "first night".