A time to think of others

Here's another great story, that's been submitted to our Christmas Tales project. To be in with a chance of getting your story included in this year's Wicked Christmas, you must submit it online before 1 September. Find out how to take part.

"Mid December 1984. I was 8 years old and I got to go and stay with my dad for the weekend. I always looked forward to seeing my dad but I also dreaded the tension in the air between and him and my mum when he'd come and pick me up. They had been divorced several years earlier; the split was far from amicable, although I never found out the reasons why until many years later and even now the details are a bit hazy. 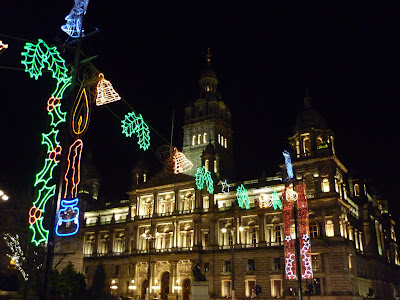 Anyway, the purpose of this weekend was for him to get me a Christmas present. It was one of the few times throughout the year I got to see him and, as my mum would tell me through gritted teeth, getting presents for my birthday and Christmas was as far as his parenting skills went, which probably explained her resentment towards him. Now that I'm older and have a children of my own, I can see her point but when you're wee it's little things that make up childhood memories; like gazing with wonder at the magical shop windows of Lewis's department store while he concocted elaborate stories as to what the scenes depicted, or standing in George Square admiring the Christmas lights and him letting you have one of his massive woolly gloves so you wouldn't burn your wee hands on the roast chestnuts he would get from the nearby vendor, or best of all, letting me stay up way past my bedtime and I'd listen to him play guitar and sing Rod Stewart songs (badly) to me in his tiny one bedroom flat on Pollokshaws Road.

My dad was a political exile from Chile and came to Britain after surviving torture and horrendous brutality for 2 years in a concentration camp under Pinochet's fascist dictatorship. He always tried to make me aware of political issues and tried to encourage me to watch the news and take an interest in what was happening in the world. This was during the reign of Thatcher (she'd already snatched mine and my classmates' milk a couple of years earlier) and at the height of the miners' strike. After getting my Christmas present, a much longed for Tenderheart Care Bear, he took me to a rally for the striking miners, where women explained how it would be a grim Christmas for them; they were struggling to feed their families with their husbands still out of work. Seeing the anguish and desperation on these women's faces, I understood that Christmas for them would not be an occasion to celebrate. There were some miners' kids there and I couldn't help but notice many of them were wearing coats that were either too thin or too small for them - certainly not enough to withstand a biting Glasgow winter. Even at the age of eight, I felt the injustice of it all and felt slightly guilty for wearing a sheepskin jacket and a nice pair of boots that I knew my mum had worked hard for. Without any prompting from my dad, after the rally I marched up to one woman and handed over the boxed Care Bear. "I want your little girl to have this."

My dad came over with a panicked look on his face. I suppose he was dreading the fact he had to take me back to my mum with no present. We got the bus back and inevitably the arguments and sniping between them started. I went into my room with my hands over my ears but before leaving my dad came to say goodbye. He gave me a hug so strong I thought I would stop breathing. There were tears streaming down his face - he told me he loved me and that he was really proud of me. That was probably one of the best weekends I had with my dad."