We've have more great feedback for The Monster in the Hall at the Edinburgh Festival Fringe.

“David Greig’s fizzing urban fairy tale of a teenage girl, her sick Hell’s Angel father, his metaphorical motorbike in the hall…and big Agnetha from Trondheim is an imaginative synthesis of Beauty and the Beast, pop songs, heavy metal, and rapid-fire acting.”

“Guy Hollands’s brilliant and energetic production…is galvanised by Gemma McElhinney as 16 year-old Duck Macatarsney, a genuine princess with the appeal of a new Romola Garai, and who sings beautifully, too… Delightful.”

“The Monster in the Hall brings a jolt of upbeat feeling to a potentially grim subject…Sweet, without rotting your teeth or your brain.” 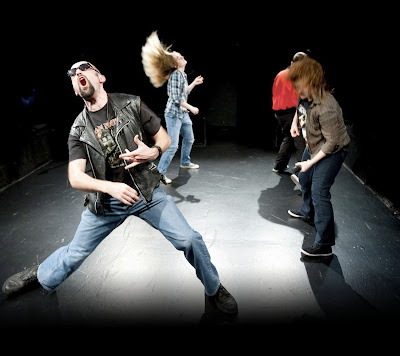 “it pushes even harder at the boundaries of theatrical possibility. Yes, it’s a piece for young people but anyone could – and should – crash the party.”

“If, theatrically speaking, it's anyone's Festival, it's surely David Greig’s…two of his plays presented under the Traverse umbrella…are two of the most accomplished and enjoyable shows this Edinburgh August.”

"London needs both these shows"
[Ed. also referring to The Strange Undoing of Prudencia Hart]


Here's what our audience said:

Both edfringe.com and traverse.co.uk are showing as sold out for The Monster in the Hall, but you can queue at the venue (at the time of the show) to await returns. It's definitely worth trying if you're keen to see a show that guaranteed to be a good 'un!

Read more reviews on our blog