Recent Citizens Trainee Director, Ros Philips is currently in Japan directing a community theatre production of Top Girls. She has been blogging about her experiences:

Thankfully the miserable fog of Jet lag has cleared and I can get on with this extraordinary experience. Yonago is in beautiful surrounding, it is a small port nestling in mountains. There is a ski resort 30 mins away, some of the oldest temples on Japan, hot springs and clear blue sea Japan Sea. I’ve started jogging around, much to the amusement of the locals.

Much of the rehearsals are spent getting to grips with the ideas and relationships Caryl Churchill has written for us.  Consequently I find myself slowly indoctrinating the cast into the mindset of 80s feminism. 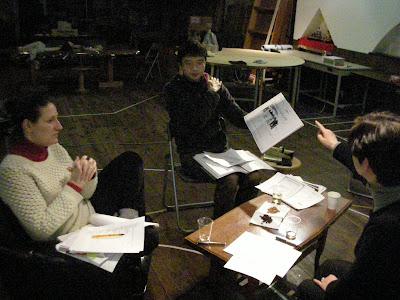 In Japan the phrase ‘Marriage Retirement’ has emerged. My Producer Hiroka tells me that women have been hit hard by recession and finding jobs that allows them to live independently is nearly impossible. Young graduate women are stating their main ambition is to find a wealthy husband as a means to autonomy from family. They want men who earn over 70k a year which as that’s a tiny percentage of men they are heading for terrible disappointment.

After the first week where the older women in the cast were articulate and opinionated about feminism and the younger women fiercely resistant to even saying the word, one young woman told a story that brought everyone together. She is now in her mid 30's and when she was completing her MA in Chemistry - top of her class- her tutors recommended her to the top companies. The job she most wanted was in Tokyo so she took the £200, 8 hr coach ride to the interview, sat in front of the panel and within 5 mins was asked 'why she wanted a job? She could get married, she's only 23 and would make a great wife'. Yes many a panel may think it in the UK but in Japan they say it. After an 8 year battle to find a job that matched her expertise she gave up came back to Yonago and is now an administrator. She's happy, she's delightful in fact but now, now she's thinking it didn't have to be that way for women in Japan.

Ooooh the influence is addictive. Japan is so genderised, they have boys' days where everyone puts up flags and parties and girls' days where people put a doll of an emperor and empress on their mantle piece and eat cake. You do see women walking a couple of paces behind their husband. I promise I am biting my tongue, and respecting the traditions. I just keep asking questions, that relate to the play. It's a discursive play, full of opinionated women, they've got to get into that groove.