As you may know from previous blog posts, Ros Philips (former Citizens Trainee Director in Residence) is currently directing a production of Top Girls in Japan. She sent us this blog from the rehearsal room:

Lets say the challenges came thick and fast. I had a design meeting in Tokyo the morning after touchdown which had the 'master' designer walking out - for 'fresh air' - which Mikiyo (my translator) and I thought 'interesting'. I got nervous when he kept repeating how much he respected me. This is a country that reveres experience and age and I have to learn fast where I fit in to that hierarchy. 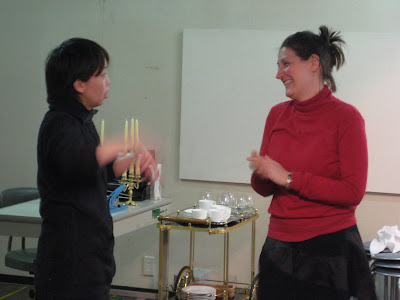 Deep snow (yes worse than Glasgow in Dec) in Yonago, my meccano flat - which I refer to as my hutch, is referred to by Japanese people as a 'weekly flat'. These 'kit' flats are to house 'salary men' on their travels away from home. Its thin walls make it very cold. It's taking some getting used to but I do have a heated loo seat to keep me warm.

I was greeted with a 7 day week schedule, I was told that there was a five hour production meeting (eat your heart out Chris McDougall - Citz Head of Production!) and a costume parade during the first two days of rehearsal. We negotiated. 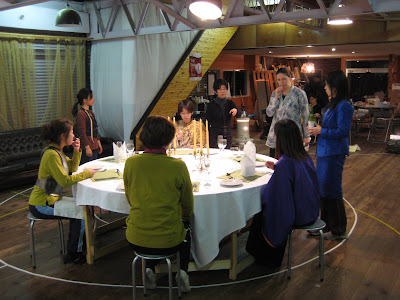 On day three we had a read through, a voice in my head kept asking questions such as ‘why did that three word sentence take forever?’ and ‘why are they being so reasonable to each other with such blue language?’. I asked Mikiyo why they seem to take so long to speak a single sentence and she told me that in Japan 'we like to explain the meaning of text'. So that’s why we were bored out of our brains. Instead of writing the equivalent of 'He's a bit of a cowboy' we've got 'He's a man that can’t be trusted to do his job properly'. We’re working with explanations not equivalent idioms. It’s a lesson in how to kill a play stone dead, and therefore something we're working on.

Also, swearing is 'not done' here in Japan. When I asked them what comes out of their mouths when someone drives into the back of their car they blush and recall swearing. So swearing is done here in Japan but everyone has amnesia about it. I have come to realise the general policy is that many 'ugly' things are best left to the forgotten recesses of the Japanese mind. Who knows maybe it's healthy. I start to wonder if that was what 1950's Britain was up to. Caryl Churchill is going to challenge this practice. 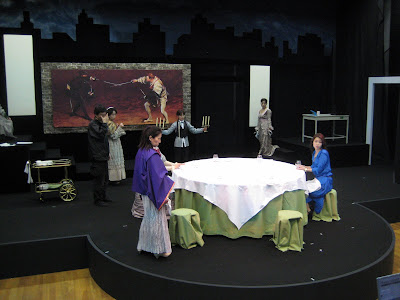 Finally, to top it, I played a game. This was to see what peoples first impressions of the play where, and to find out their opinion of the themes. When I asked them to give a one sentence definition of feminism..... 'Feminists are ugly lesbians', wasn't the actual phrase used, that’s more of an amalgam of the consensus. Not far wrong I hear some of you PC beleaguered readers say. Oddly, it was the women in the group who most supported the statement. 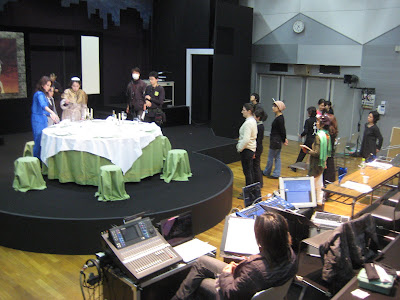 All sightseeing plans had to be scrapped I realized this was to be full time, full on, full bloodied campaign, with cast, crew, creatives and company. Anyone whose title could begin with a C. The good news is my stage manager and translator are brilliant, and well and truly onside.