Exclusive interviews with the creative team behind Edward Gant....

When Edward Gant’s Amazing Feats of Loneliness opens next week it brings a world of adult fairytales, recreated in a series of mystical locations – both real and abstract! Below are a few words from the people whose creative vision has brought these extraordinary stories to life:

How did you come across the script?
I worked with Anthony as assistant director in Plymouth in 2002. When we started rehearsal there was no script, when we finished there was. We would tell stories and discuss issues in rehearsal that have fed into the work. I can still remember the initial seeds of the ideas forming from apparently unconnected anecdotes.

What made you want to stage this show?
It combines the things I love in live performance. It is incredibly funny, deeply irreverent and strangely moving. Also it is a piece that many people have never seen before.

What inspiration will you be drawing on for the piece?
The most inspiring elements of any play should be the script and the actors. They will be the main sources. In design terms we have looked at lots of Victorian images and tried to view the world from that perspective. The colonial, empire proud, showman and his troop. 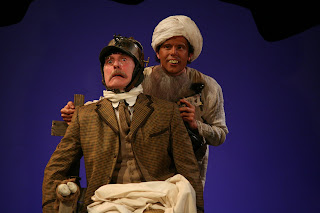 What is the most challenging aspect in bringing this show to the stage?
Some of the stage directions are extreme and take a lot of inventiveness. But the main challenge will be to make it funny and moving. They do not always go hand in hand without a fight.

Would you ever compare this production to a “freak show?”
Never. In Gant’s own words...
'But what I bring you now is no mere Freak Show. You will gasp, yes, and you will marvel and you will see your share of grotesquerie. But the deformities on show this evening are not the deformities of the frame, but those of the heart and mind.'

Will there be a lot of music involved in the production? If so, what kinds?
Yup. Lots of incidental underscores and a couple of numbers. All in the period. All apparently played within the world of the play.

Who is your favourite of Gant’s characters?
The Oyster, named Martine.

What makes Edward Gant such an amazing character?
His confidence in what he does. And ultimately his human vulnerability. 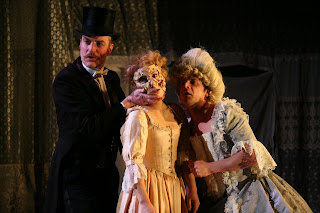 Where has your design inspiration come from?
I looked a lot at Victorian Theatre and Magic, Fairground Art and The Circus. ‘…Gant’ is an intoxicating blend of all of these forms of entertainment. On a wider scale, I looked at old maps and astrology – the shapes and forms that are associated with these subjects and how they could fit in with the structure of a Victorian proscenium arch theatre.

Was it challenging to design a show that involves such bizarre characters and situations?
Every brief has its own challenges – sometime those that require the least are often the hardest and most laborious. The joy of ‘Gant…’ is that the Designer is allowed to run riot, be indulgent, relish the extravagance of the period and have fun! Perhaps that’s what is challenging about it – you don’t know when to stop. 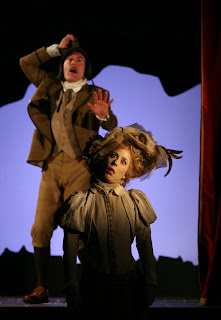 Edward Gant...' opens tonight at The Nuffield Theatre, Southampton. We are the only Scottish venue for this touring show. For more info on the show click here or to book tickets call 0141 429 0022 or online at www.citz.co.uk
Cx
Labels: Anthony Neilson Edward Gant Headlong Theatre

Blogger said…
If you want your ex-girlfriend or ex-boyfriend to come crawling back to you on their knees (no matter why you broke up) you need to watch this video
right away...