Lampedusa in Rehearsals - Week One 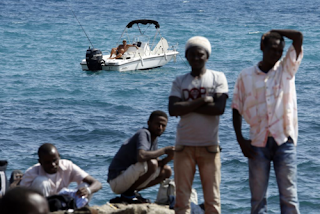 Lampedusa Assistant Director Tess Monro offers an account of what's been taking place during the first week of rehearsals, and how Director Jack Nurse has been working with the cast and crew to draw out the core issues in the play.

The first week of rehearsals on the much anticipated Scottish premiere of Anders Lustgarten’s bold, incisive and moving masterpiece, Lampedusa, was a reflection of the urgent and assertive attitude of the play itself.

Lampedusa tackles European mass migration from a global perspective and its impact on British domestic politics. But, more importantly, as Anders and director Jack Nurse were keen to stress on day one of rehearsals, this is a play about the personal experiences behind the politics. It is the story of two strangers finding hope and connection where they least expect it.

The first two days of rehearsals were spent with Anders Lustgarten. Under his guidance we descended into the deep tissue of the play with table work and group discussion. This process illuminated the enduring vitality of the politics in the play and, crucially, the necessity to maintain the sense of political urgency encapsulated in the original production (Soho Theatre, London 2015). Consequently, Anders proposed to update the original text; to encompass the current political climate in Europe and post-Brexit Britain. Citizens Theatre’s Lampedusa will therefore be an entirely new, cutting-edge and unique production.

Next order of business was get the play up and on it’s feet. Director Jack Nurse’s process is curated to mirror his overall vision for the production. The play introduces two independent and diverging experiences of mass migration from a global and domestic perspective. As the play progresses parallels between the characters begin to emerge and unite their experiences.

The first week of rehearsals was centered on working with Louise Mai Newberry and Andy Clark individually to get better a sense of the shape and arc of each character within the text. Week by week as we continue to work through the play we will begin to integrate these rehearsals and, furthermore, the physical and emotional journeys of Denise and Stefano.

With the mid-week arrival of composer Stuart Ramage came the infusion of live music into the rehearsal process. In this production the lyrical quality of Lustgarten’s writing and the centrality of Toumani and Sidiki Diabaté’s song Lampedusa will be supported and enhanced by live acoustic guitar. Stu’s presence in the rehearsal room throughout the three-week process will enable the development of a musical score in tandem with the exploration of the text.

Week one has also been about acclimatizing to the intimate performance space of the Circle Studio and confronting the challenges of balancing the contrasting worlds of Denise and Stefano while they inhabit same physical environment. At this stage in the process possibilities are infinite and continual investigation, trying new and diverse ways to respond to the text and use of space, is essential and encouraged.

Week one is not about nailing ideas to the ground but rather discovery, imagination, playing and interrogating ideas; skills that Lousie Mai and Andy demonstrate with verve and dexterity. Working at an impressive and efficient pace we are off to a flying start.

Blogger said…
If you need your ex-girlfriend or ex-boyfriend to come crawling back to you on their knees (no matter why you broke up) you have to watch this video
right away...

Unknown said…
Its a terrific delight studying your post. Its rich in data I'm looking for along with I enjoy post the comment which “The articles of this post can be awesome” Good operate. lampedusa
6 September 2018 at 14:02