It’s back! Trainspotting returns to the Citz

Audiences and critics were blown away by last year's production.

“And if you want further proof that Trainspotting is one of the great, iconic narratives of the last 25 years, then you should beat a path to the Citizens’ Theatre, where this sharply-timed revival of Harry Gibson’s stage version – emerging just in advance of Trainspotting’s film sequel – is playing to packed houses and standing ovations.”
The Scotsman  ★★★★★

“everything a theatre production should be”
Broadway World  ★★★★★

“crackles with a raw new power”
The Independent  ★★★★

“The cast of five, led by Lorn Macdonald as Renton…make the material their own.”
The Herald   ★★★★

“To take on such a production takes courage; to both recognise and subvert expectation takes skill; qualities here in thankful evidence”
The National  ★★★★

Trainspotting cannot be summed up in a mere tweet. What an outstanding piece of Scottish theatre!
— Larissa Jean Currie (@Larissa_Currie) September, 16 2016

Trainspotting exceeded all expectations – it was SO GOOD. Go see it. You’ll regret it if you don’t. @citizenstheatre #trainspotting
— Briony Cullin (@glasgow_food) September 23 2016

Read more about what audiences thought on Storify. 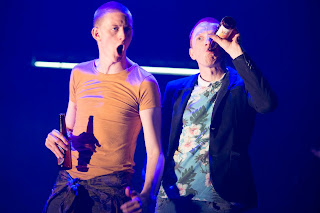 Trainspotting plays at the Citizens Theatre from 18 October – 11 November, before moving to the King’s Theatre Edinburgh, where it will be presented by Selladoor Scotland, from 14 – 18 November.