We're beyond excited about our programme of work for Spring 2017. With a new production of Graham Greene’s Travels With My Aunt, a Brexit-inspired production from the National Theatre of Great Britain and shows from top theatre companies Cheek by Jowl and Kneehigh there's something for everyone in our newly-announced Spring 2017 Season - on sale now! 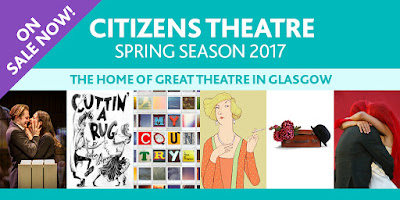 Speaking exclusively to The Herald, Artistic Director Dominic Hill spoke of the Spring 2017 season: "There's a lot of celebration of theatre in this season about what theatre can bring to people. The way the world is at the moment, I think there's no harm in trying to find some joy."

Read on to find out more about the fantastic shows we've got coming up at your local theatre from January - June 2017.

Cheek by Jowl tackle the countless hairpin turns in Shakespeare’s late masterpiece, from violence to farce, through multiple countries and over the course of 16 years, in a fiercely contemporary production.

Director Declan Donnellan and his cast take up Shakespeare’s most fundamental questions about redemption and forgiveness, testing the limits of hope and humanity in this tour-de-force interpretation.

CUTTIN' A RUG 8 Feb - 4 Mar
Following our 2015 production of The Slab Boys, we'll be presenting the second installment of John Byrne’s much-loved trilogy, Cuttin’ A Rug. The play dives straight back in to the story, following the boys to the annual staff dance, still chasing the unobtainable Lucille and their dreams of life beyond the slab room.

SOMEWHERE NEW 2 - 4 Mar
A new festival of contemporary performance will take place in venues across Glasgow in Spring 2017 and we'll be hosting a Scottish artist with a new piece of work in our Circle Studio in March.

More information about the Somewhere New award recipient will be available in December.

MY COUNTRY: A WORK IN PROGRESS  28 Mar - 1 Apr
The National Theatre of Great Britain has collaborated with seven UK theatre companies, including the Citizens Theatre, to talk to people across the country about the recent EU referendum.

The interviews will be woven together by poet laureate Carol Ann Duffy and National Theatre Artistic Director Rufus Norris to create a performance piece that will tour the country presenting the wide range of opinions that have been captured.

NOËL COWARD'S HAY FEVER 5- 22 Apr
The various members of the eccentric Bliss family have each invited a guest to stay at their idyllic rural retreat. The house party turns disastrous as the hapless visitors become playthings in the Bliss’ self-made melodrama.

Dominic Hill will direct this funny and biting exploration of the games people play to avoid confronting the realities of life.


TRAVELS WITH MY AUNT 3 - 20 May
Retired bank manager and dahlia enthusiast Henry Pulling becomes newly acquainted with his septuagenarian Aunt Augusta at his mother’s funeral. Unable to resist the well-travelled Augusta’s powers of persuasion, Henry leaves suburban London with his new relative on a curiously glamourous trip across the world.

TRISTAN & YSEULT 30 May - 3 Jun
Kneehigh make their first visit to the Citizens Theatre with their playful and profound version of the ancient Cornish legend of fated lovers.

Circus performers, poetry, audience participation and live music spanning mambo, ballad, punk and opera are mashed together in this landmark production which has won fans across the world.


What are you most excited to see in our new session? Tweet us with #CitzSpringSeason to let us know!


Tickets for all productions in our Spring 2017 season are available now to book online, or by calling our box office on 0141 429 0022.
Labels: 2017 Citizens Theatre cuttin a rug Dominic Hill hay fever my country somewhere new spring season travels with my aunt tristan & yseult

Blogger said…
BlueHost is ultimately the best hosting company for any hosting services you require.
13 November 2017 at 23:28