The first day of rehearsals is nerve wracking. Big challenges, new faces, and far too many names! On day 1 of Hansel & Gretel the room was packed to the brim: actors, creative team, crew and stage management all seated to witness the read through as our Christmas 2016 cast read Stuart Paterson's inventive adaptation of Hansel & Gretel aloud. It was a chance for the cast, creatives and crew to all be in the same room together before we all split off into our separate busy worlds for the next few weeks! 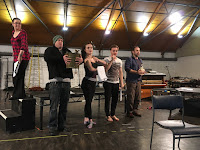 Our set designer and puppet master Rachael Canning unveiled the model box for Hansel & Gretel to gasps of delight. Her design embraced the carnivalesque world of the 1920's travelling circus - packed with rich visual treats and surprises. In true Citz style, Hansel & Gretel will be a complex and eccentric Christmas show - an exciting and tumultuous world of acrobats, magic forests and sorcery. 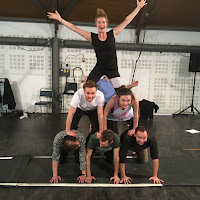 Citizens Theatre Artistic Director and Hansel & Gretel Director Dominic Hill was keen to get the cast up and moving. And once we got up we never sat down. The cast spent the rest of the week trying out things on their feet. Benedicte Seierup and Lucien Macdougal - the production’s talented and joyful movement directors - led several clowning workshops this week. These sessions were very physical and playful. It’s been wonderful to witness how these workshops have fostered a supportive and spirited ensemble that listen to each other, laugh with each other and bring the crackling energy a Christmas show like Hansel & Gretel needs. 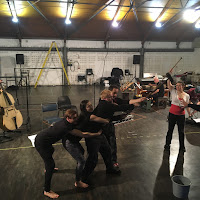 On Wednesday Rachael led a puppetry workshop. Puppets will be an integral part of Hansel & Gretel’s world so the cast must be skilled at using them with grace and precision. Rachael taught us how to bring a puppet to life through breath, posture and by seeing the puppet as an extension of yourself, never separate. It was a great exercise in concentration and sensitivity.

As you can see a lot happened in week one: we broke the ice, learnt new skills and shared many laughs. In week two we’ve begun to explore the vibrant musical world of Hansel & Gretel, led by composer Nikola Kodjabashia and his impressive collection of instruments! Stay tuned for more on that in the next post!