Benjamin Zephaniah wrote Refugee Boy in 2001, but that wasn’t the end by any means. It is now a key text in schools all over the country, and has achieved world-renowned acclaim. The novel was adapted for the stage by poet Lemn Sissay, whose own life-story gave a powerful insight into the play.

Here, Benjamin talks about the novel and why the play adaptation is equally important. What do you think makes Refugee Boy a powerful story?
At the heart of it, it’s a play about a human condition that you hear about on the news, but that not all of us are familiar with - it tends to be talked about in terms of statistics nowadays.  When I started the novel, and Lemn plays with the same concept, you’re not taking sides. You’re saying ‘this is just a result of war’, you’re not saying one is better then the other. When you do all your politics, don’t forget about the people’. And people in the audience know that you're not preaching to them, you’re saying ‘ you’re fighting but look what you’re doing to human beings'.

And it's a genuine story?
I didn't have a great education so I have to be connected to my community - the story of Refugee Boy came from the story of a lot of other refugees living next door to me in East London, only after I wrote it did I do research to check I’d got the court procedures right. I wrote it from what 14-15 year old kids were telling me. I’ve never thought art should be elitist, it’s alright sharing ideas but eventually those ideas have to connect with people in the real world.

Although it’s about a teenager this play resonates with all ages. Why do you think that is?
The innocence of Alem, it’s not a naive one; he’s flown into a  country where everything’s strange, he’s in a children’s home which are strange places. To come straight from Ethiopia and then straight into a children’s home, which is a really bizarre corner of our country, and then to an Irish family - he’s trying to work it all out and people go along with that, people believe it. Anyone that’s been a child in a strange place and who know what it’s like to look up and think ‘what are these adults doing?’ will recognise this.

What did you think when you were approached about Refugee Boy being adapted for the stage?
I heard from Gail McIntyre saying she wanted to adapt it and immediately thought it should be. You usually write your novel and then you let it go but with Refugee Boy people were always asking, are you going to write a sequel, will there be another - what else is going to happen? I knew it would work well on stage but for a lot of reasons I wanted someone fresh to come to the story. Lemn said he wanted to do it, he was so passionate and said it was so close to his own story. 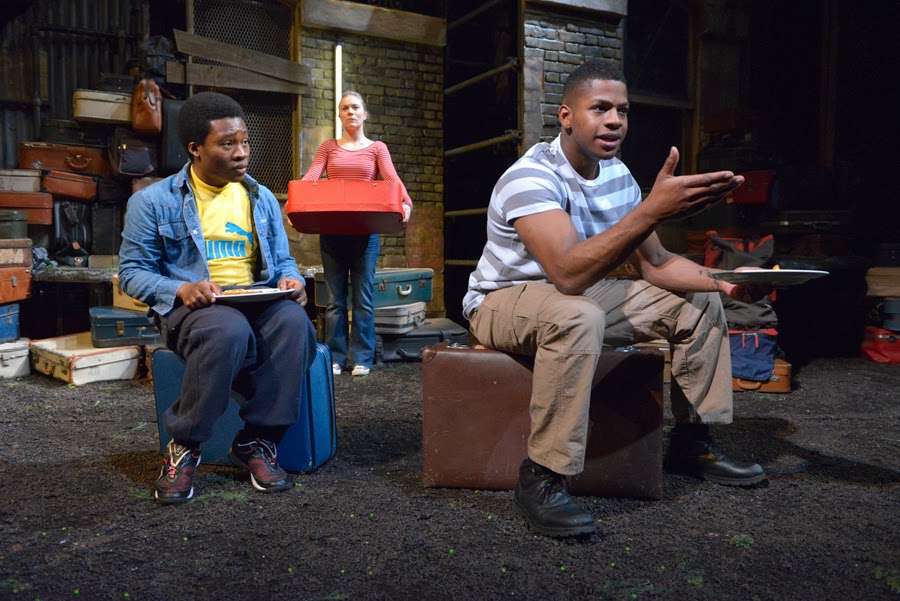 How did it feel seeing Refugee Boy at West Yorkshire Playhouse?
I’d read the script but I’m not great at visualising from a script. When I went to West Yorkshire Playhouse and saw the set I thought wow, it’s really creative - it’s so descriptive and really powerful with the suitcases. When it started I recognised lines that came from me and lines that came from Lemn, and after I time I couldn’t tell anymore. It was an emotional time.

This is a story that crosses boundaries, was this reflected when watching this play?
It was really moving to feel the response and emotion coming from the audience. I saw it a couple of times and everybody commented on how mixed the audience was; the age range, the nationality range - there were lots of refugees themselves. For me one of the most moving parts was that on one night there were two women hugging and talking in the corner, one was from Etheopia and one was from Eritrea and they were on opposite sides of the war fighting but here they were together. It brings people together.

Alongside the play is an education programme and work with refugees raising awareness of the issues in the play. How important is this?
I’ve always said that artists should not be remote from the people. My mum was in her 70s when she went to the theatre for the first time. Having said that people in Jamaica made up skits in the streets, but the idea of parking the car, going into the theatre it’s very alien to some people, and so we have to find new ways of connecting. Most refugees I know are trying to adapt and fit in, they’re too busy for theatre and think that it has nothing to do with them. So it’s great that we’re reaching out to bring those people to the theatre. The only sanctuaries before were the church and theatre should be like that, as places where people feel passionate and go to have a spiritual experience a lot of the time.