A Trip Doon the Watter

We are currently seeking your stories, memories and photos related to Glasgow Fair holidays. Find out how you can contribute. Below, I've posted two great pieces written by Grace Donald (aged 86). Thanks to Bridgeton Community Learning Campus for sending these in!

Our Trips on the Waverley

I hope you don’t mind me writing about our family 1940, 1950. We lived in an old tenement building with three flights of stairs. We were the top landing where there were four families and one toilet shared on each landing. There was my mum, dad, four brothers and a sister.   This is to let you know our first Glasgow Fair Holiday on the Waverley, the family were all excited. 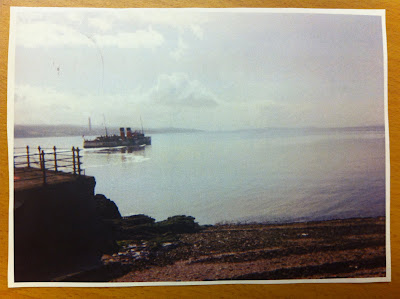 First of all we had to pack this huge hamper, we never laughed so much, the boys had to sit on it to close it. How the delivery man carried it down all those stairs, I will never know, it was so heavy.  We all left home early to get to the Broomielaw where the Waverley was leaving from.  The queue’s that were all lined up for us were tremendous but the Glasgow patter was so funny. We had all to take hands in case anyone got lost. They were so excited. We managed to get on board, if you could have seen the children’s faces, as we were going up the Clyde. We were so near the shipyards. Lots of the workers waved to us and cheered us as we passed by them. We all returned the cheering - this was a great start. We then had a great time when the men playing the accordion and banjo had us all singing and dancing. Dad took us down to see the engines; seeing them going back and forth. The boys were thrilled, they stayed nearly all the time there. The engine room was spotless. Mum, my sister and I had Scott’s pancakes and tea. It was great when you passed another steamer; the waves were wonderful and all the foam from the other steamer. It was a great trip doon the watter.

When you arrive at the pier, you watch the rope getting thrown onto the pier, then all walk down the gangway, with much laughter and thanks.  We all spent many years going to Dunoon. We took the train from Glasgow, Central Station, Platform 13 to Gourock, then onto one of the steamers to Dunoon, We used to climb Highland Mary, then go out on rowing boats on the Clyde. We went up and down when the steamers were coming into the Pier. As a family we used to sit at the pier in Dunoon and sit for hours watching the Waverley and King Edward Marchioness of Lorne and others coming, it was some sight! We also enjoyed the Gardens and the shows in the evening, and the open pool, the water was frozen.

My husband and I went to Dunoon on honeymoon. Our two sons loved the Waverley. I still go each year to see my wonderful Waverley.

I am sending some snaps if you want to put on the wall of the theatre.

The present Waverley was built in 1946, replacing the first Waverley built in 1899, which was involved during World War II. She was sunk in 1940. The Waverley was built tor the London and North Eastern Railway (LNER) Company to sail on the River Clyde, calling in at the piers at Broomielaw, Gourock, Craigendorran, Millport, Arran, Kirn, Dunoon, Rothesay; and sails on Loch Lomond, and has been to Isle of Wight. There were many steamers on the Clyde; Jeanie Dean’s, Queen Mary II, Caledonia, Talisman, Jupiter; most of the steamers finished service in the late 1960s. 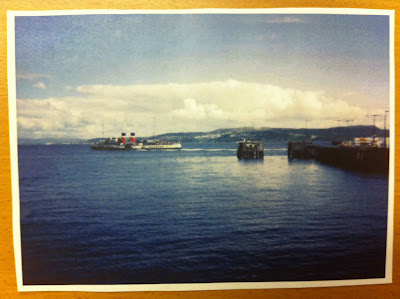 Our family went on holiday on all of these steamers including Waverley to Dunoon for years. We were at Dunoon when Clydebank was bombed and during the war there was a boom across the River Clyde from the Clock Light House to Dunoon Pier (one of the snaps shows one of the steamers leaving Dunoon and opposite Clock Light House). This was to catch enemy submarines coming up the Clyde. One German submarine got caught.

I hope you don’t mind me writing about the Waverley, steamers and the River Clyde, the scenery was beautiful. The Waverley with its two funnels: red, white and black. The steamers were all lovely. River Clyde is very bare now. Steamers still call into Dunoon and Rothesay. I am proud to say the Waverley still sails on the Clyde. Our saddest time at Dunoon was during the war when a convoy of troop ships left the Clyde to do their duty overseas, many a tear was shed.

Thank you Grace - we don't mind at all, in fact we loved reading it!
P.S. our scanner is broken so I just took some snaps of your snaps, which seems to have worked fine : )