This season's Frost and Fire is on Saturday and sees the welcome return of Keith John Adams - who pretty much knocked everyone's socks off last year with his brilliantly humorous, upbeat and interactive performing style.

He's joined this week by Marion Kenny who'll be playing Chinese harp and flutes and Wounded Knee (AKA Drew Wright) - a mesmeric singer and experimental vocalist.

Headlining the gig is harpist Serfina Steer who has recently toured with Micah P Hinson, worked in the studio with Patrick Wolf and recorded a track for Cerys Matthew's new album. Speaking about her "Change is Good, Change is Good" album, Jarvis Cocker said:

"Probably my favourite album of the year".

With 5 stars from Mojo magazine, this is guaranteed to be a performance to remember - in the fantastically intimate setting of our Circle Studio.

So gather round and enjoy an awesome night of fine music. 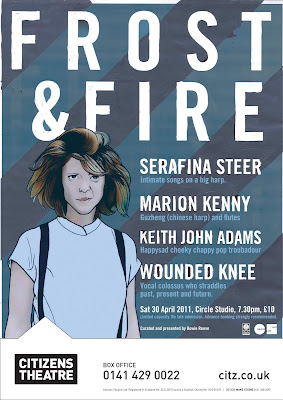 Thanks to Duncan at Make Studio for poster design!