Half way through the week, we do a run to the creative team and it reveals a lot of holes and issues to be dealt with, usual at this stage but nonetheless still depressing! But there's still time now to put things right. Accents, pacing, narrative clarity, physicality all need to be looked at. Sometimes these things don't become clear until dress rehearsals or previews by which time it's often too late to do much about them, so it's hugely valuable to find these things out now. We look at Alex. We don't feel we really get to know him until after the Lodovico treatment as he's always 'on', giving his view of events but with no explanation for his actions, but we need to find a way of letting an audience into this character who in reality gives little away. We also need to work on the energy of the different sections in the novel - In Section 1 Alex is the aggressor and drives the action; in Section 2 and 3 things are done to him, so the story can seem less dynamic, and the energy can drop in the play if we're not careful. 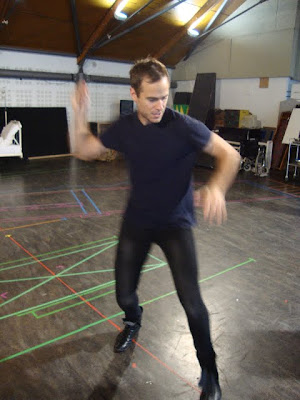 We have a wonderful session with sound designer Graham Sutherland where we hone a car sequence so that it's all timed. We trim what we have and tighten everything, as well as finding new details in the process. We also look at fights set to a soundtrack and they really start to come alive. We have a lot more sound to put in over the next few days - and Graham also has a full time job as Citizens Head of Lighting and Sound - but this is a great start, and with the right soundtrack the play will start to feel seamless. The closest equivalent experience I have had at the Citizens was on The Sound of My Voice, also with Graham, where we had time to develop the soundtrack in a similar way. It's how I like working best: with a tight team all working closely together with minimal distractions, feeding off each other's ideas. 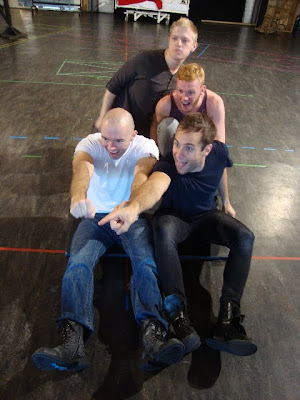 Work has become really good after our notes, focused, getting rid of 'ghosts' - old blocking and ideas that worked in week one but no longer feel right. We strip away the non-essential and keep delving deeper into the text itself. 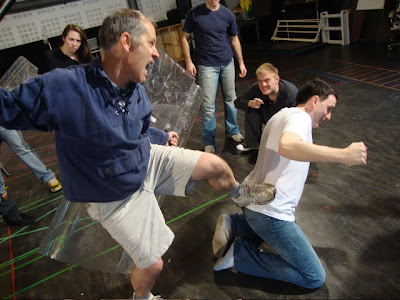 The run has, for instance, exposed that the riots don't work. They have no connection with Alex and so are cut, despite a battery of riot shields and helmets having been found for us.

We also find that the end needs trimming. It's too long and also our doubling means that Alex's new gang look suspiciously like his old one! 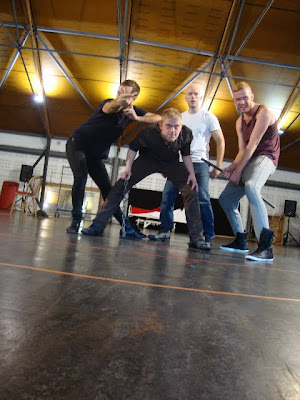 Mike Nellis, Professor of Criminology at Strathclyde University, comes in to talk. He is writing about the book, and will contribute to the schools pack. We talk about the origins of social workers as Police Court Missionaries, but by the 1960s increasingly influenced not by the church but by sociological studies. We talk about Alex's age - he seems far older as a narrator than he says he is. We discuss the concept of free choice and in particular Anthony Burgess's pessimistic view that by God's grace we can choose good or evil but more often people will chose evil. There is also discussion about the faults in the novel. That man is allowed to be evil in Burgess's world, but there is no discussion of what to do with those who are consistently anti-social. Mike also feels that the last chapter in the novel seems tacked on. Petty criminals may grow out of their criminality, but can those who commit serious crimes such as rape and murder. Kubrick's film didn't include the last chapter nor do America editions and surprisingly some UK editions of the novel. We talk about Jimmy Boyle and the Barlinnie Special Unit, the Bulger case and others. We also discuss the debt to James Joyce's Portrait of the Artist As a Young Man in the portrayal of the Prison Chaplain, which shows lapsed catholic Burgess's mockery of the Chaplain's views about hell and damnation. 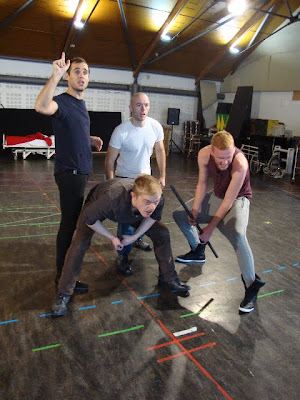 And to round off week three, one of the younger members of the team suddenly says that the gang are the Teenage Mutant Ninja Turtles: Alex is Leonardo, the leader who has a sword; Georgie is Raphael, the wannabe leader with a knife; Peter is Donatello who carries a stick and Dim is Michelangelo the goofy one who has nunchucks. We look around and his is pretty well the weapons each of our gang has, as well as their role. Every book I've read recently seems to reference A Clockwork Orange at some point. Now it seems even the Ninja Turtles were influenced by a Clockwork Orange - it's the perfect end to the week.