Director, Jeremy Raison has been blogging from the rehearsal room of A Clockwork Orange. This is an long entry, but it's been a crazy week...and I didn't want to delay posting this any longer. It's well worth a read to get the Director's insight into the rehearsal process:

Start as we mean to go on - a morning of fighting and car theft! We’re looking at the physical language of the stage version of A Clockwork Orange which will be stylized to match the stylized language used by Burgess to tell the story. The droogs are soon in the swing of things - crasting and tolchoking with great big bezoomy grins all over their litsos. One actor keeps muttering ‘I’m 47’ as the work out becomes more demanding, but it’s an exhilarating morning - great fun, with lots of laughter as the actors are put into teams to look at different ideas. There’s a brilliant fight sequence devised by two of the actors, in which neither touches at all, which we will come back to later. By the time we‘ve seen one car pushed over a cliff and another set alight, we know this is going to be a great rehearsal period. 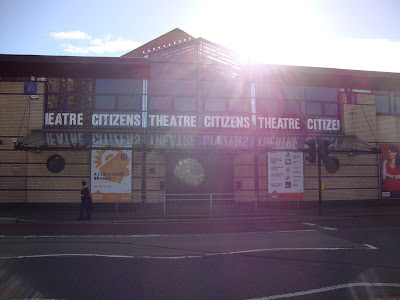 In the afternoon we do the traditional read-through, where the whole play is read - and it’s one of the most relaxed I’ve had.

The read-through is absorbing, with Laura Walshe, our stage manager, seeming to do a large proportion of the reading. There are masses of stage directions which will be a lot of fun to stage, but for now are just words on paper. She gets a round of applause at the interval for her hard work!

In the evening there’s a production meeting. The set design has had to change because of budgets. One of the greatest challenges of theatre-making. But we have to make the show to our strengths, and the design is stronger for its re-working. It takes a long time to go through everything, so that everyone will know what is happening and can work together to create something memorable. 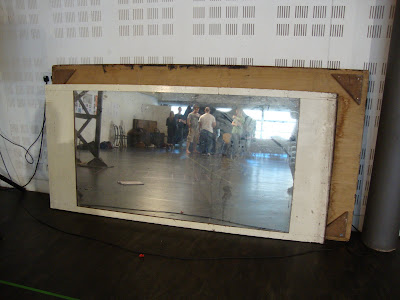 Into the script. Act One scene one. A lot of laughter as we try to find out what the gang are like. What are their relationships? Alex is the boss, Pete his right hand man, Georgie the wannabe leader, Dim - well, he’s just dim. But he’s also the scariest fighter of them all. And so we start of on Section One’s orgy of destruction that starts the events of the play. and as we work we keep looking at movement. How naturalistic do we want to be? Is this whole story in Alex’s head - how much is it his view of events? He’s on stage almost throughout and in the novel the whole narrative is his. Is he telling it in the present or with the benefit of hindsight after the events of the novel are over?

We have to work out the fights - should they be realistic? Or stylized? What works best to tell this story? Should the audience be exhilarated or disgusted or both? Thrilled or horrified? It’s a complicated balance - Alex for all his evil behaviour is also our charismatic (anti) hero. But if we don’t empathise with him at all, we won’t feel emotionally engaged with the story. And where Burgess’s language in the novel distances the reader from the violence, on stage it can be very present. Audiences will tell us if we have got this right - but that’s a few weeks off yet. Different audiences will also read the play in different ways. When the novel was written in the 1960s it was based on the fights of the Teddy Boys and the Mods. When the film came out it inspired its own 1970s violence. When the play was done in the 1990s, there was a huge new audience of young teens - the film was still banned so they had no access to the dramatised story. They clearly identified with the 15 year old Alex. Clearly an older audience sees the story in a very different light. There are also constant references points such as the Bulger case to make it seem contemporary and continually relevant. 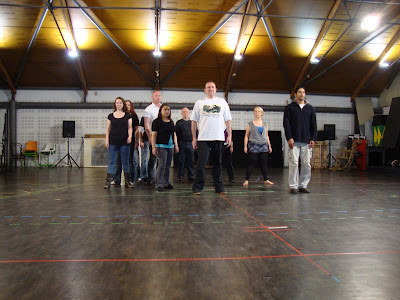 After rehearsal we meet Citizens Community Company members who we want to be in the show. We are looking for a crowd at crucial points in the story. I also like integrating the Citizens community work with its professional work. The Community Company members are remarkable. Very focused, physically exact, keen. It’s an exciting session, seeing how disciplined the community company has become after eleven years. They’ve recently tackled The Grapes of Wrath, an epic show on the main stage of the Citizens Theatre, and the experience has made them very professional. We find it difficult to decide who we aren’t able to use, as every one of them could be in the show, but we only have limited places.

A harder day. We have to stage a fight between an old cat lady and Alex. How does she move? She’s no match for him, so how do we stage anything which makes sense of what he finally does to her. In the novel Alex puts his foot in a cat dish and trips. He’s also attacked by cats. We have to find a different way to tell this. It’s a hard session trying to work out what is essential, what works and what doesn’t. Both Ella Vale, choreographer, and I are exhausted - the fight is beginning to resemble a magic sequence. We set something but resolve to come back to this tomorrow. We suspect there’ll be quite of lot of this over the next few weeks: a constant re-evaluation of what we’ve done. The novel is divided into three sections and each is quite different. It’s difficult tying them all together into one coherent whole, and there’s a real danger that Section One is so exciting theatrically that the story itself - about the merits of free will - can get lost. 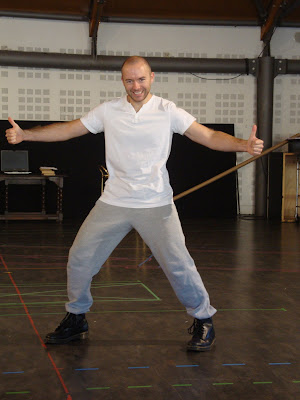 After rehearsals there’s another mini production meeting. With wardrobe. I’ve given them a cast breakdown including the community company members and so far we need 108 costumes - “can we scale down the number, please, as this is huge?” We promise to do our best, we’ll reallocate some roles, look to simplify. Usually simplifying is good, and strengthens - it focuses the story if done right.

Also speak to Carter Ferguson, fight director par excellence, after rehearsals. He’s done all my shows at the Citizens involving fights - No Mean City was particularly memorable - and is very keen to get involved with this one too. As my last show here, it seems only fitting he should be involved too. We want to look at the fights choreographically first and will then bring him in to refine specific fight moves.

We run Section One. This is very early in the rehearsal period to be doing a run, but it’s a delight to watch how the whole act works, where the gaps are, whether the style works. As the actors barely need scripts for this section, it runs together very well, even at this stage. There’s a brilliant car sequence and a very strong introduction of the gang. Some really strong characters are emerging. The scene between Alex and his post corrective advisor, Mr Deltoid, comes off the page very well. We need sound as some of the gaps are simply because we’re meant to be hearing things which aren’t yet there, but it’s still really enlightening to see how this piece might work. 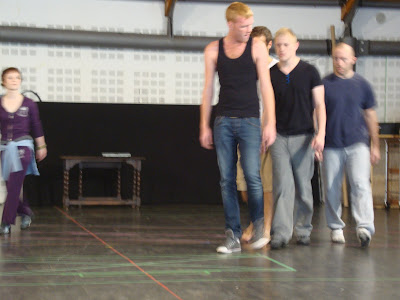 But then we move onto the prison and the Lodovico institute. Suddenly the style is very different, everything feels more naturalistic, and Alex is in some ways unrecognisable from the firebrand he was earlier. Will the audience go with this change in tempo? Should we keep stylizing the acting, in particular, or will these new characters, often with much longer speeches now, become irritating? Are we in danger of creating a completely different world? At the moment there’s a barrage of different accents and different physicalities. The actors are also now using scripts as they’ve only had time to learn up to this point. So rehearsals are a bit slower. We’re really into the meat of the piece, and as the director I’m now the one driving it forward as the initial burst of energy becomes more concentrated.

Motoring on through the play. The sheer energy of the beginning of rehearsals has gone as we come towards the end of a tiring physical week. The actor playing Alex, Jay Taylor, brings in what he calls ‘Friday biscuits’. Billy Mack mourns the loss of the Citizens Canteen which used to do fish and chips on a Friday, and was an institution. 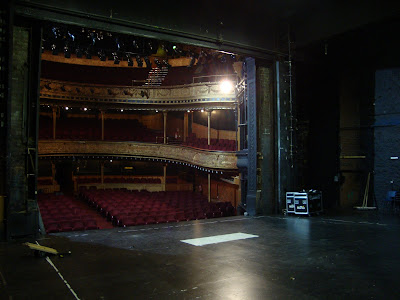 But rehearsals are going well. Style is still our constant concern. We run Section Two and it feels completely different to Section One. We also have to deal with the amount of violence - there is a lot in the story, but the play has to be watchable. The violence can neither be dull nor glorified. We want to create something iconic - genuinely fresh, but also emotionally complex and ultimately moving. It’s a real challenge, but one the cast are relishing. There’s a really good feeling in the rehearsal room. The actors are ready to try anything.

I relish this time too. After seven years as Artistic Director of the Citizens Theatre, a position I’ve now left, it’s nice only to have one thing to concentrate on. I remember what a treat it is simply to direct a show.

And whenever the energy drops Ella whips everyone up with a quick warm up: quads (new to me too), traditional games like zip zap bong, and amazing character and movement work to music by Cut Chemist. Brilliant music which feels completely right for this piece - iconic, unusual, quirky, eclectic, driving and genuinely fresh - that’s how we want our play to be. Inspiring and unique. - a genuinely theatrical explosion, unlike anything else. A classic iconic text for a classic iconic theatre.