On Monday Elly, Neil and 5 members of the Community Company head to Sweden for a theatre exchange with our friends at Lansteatern in Örebro.

Although practitioners from the Citizens and Lansteatern have worked together before, this is the first time our company members have had the chance to travel. Taking extracts from their recent show "My Clydeside Valentine", the group will perform alongside local community actors at the end of an intense week of rehearsals and collaboration. 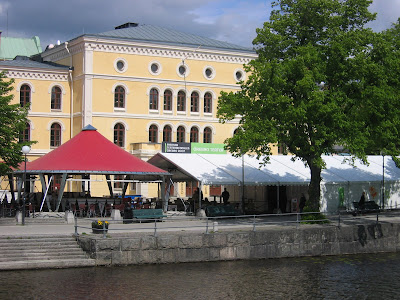 A photo of Lansteatern taken by Neil in Örebro.

I'll not say much more, as I'll let Neil and Elly update you...if Neil can ever find his Blogger password!!

P.S. The Swedish word "Bra" pronounced "Braw" has pretty much the same meaning as our Scottish word, hence the name of our project. I recently watch "Let The Right One It" - a Swedish horror currently in cinemas, which I can't recommend highly enough. I was delighted to hear the little boy at one point say "bra" and the subtitle appear "good". The simple pleasures...

P.P.S. The observant of you will have spotted that the photo in this post changed. Neil pointed out that I'd used a Stockholm shot! Oops
Labels: Community Company Lansteatern Örebro Sweden

Blogger said…
Did you know that you can shorten your long links with AdFly and get money from every visit to your shortened urls.
24 September 2017 at 21:18