Opening night came and went, with a flurry of drama not only onstage but also off, in the form of a fire alarm! However, it seems this didn't spoil the enjoyment of the good ladies and gentlemen of the press - here's the verdicts already in:

David Leddy's gothic promenade piece around off limits nooks and crannies of the Citz always promised to be something special, and so it proves.
Metro *****

A tremendous cast of six, conjure up a guignol* of crime dipped in a theatricality that unerringly lures us in.
The Herald ****
(View full review online here )

* Ed note: Apologies if I'm the only one, but I had no idea about the reference to guignol, so for those of you in the dark like me... Def: an entertainment with horrifying dramatic intent. This comes from the French version of Punch and Judy and Guignol is the character name for their 'Punch'. It is also the name of a theatre in Paris, 'Grand Guignol'. 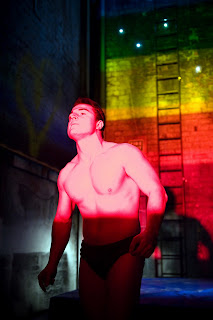 Photo by Tim Morozzo.
It's such a cliche to say that tickets are 'selling fast' but they really are in this case, so dont delay in getting yours! Call box office on 0141 429 0022 or go online at www.citz.co.uk
Cx