We here at the Citizens donned our gladrags last night for the annual Critics Awards for Theatre in Scotland. The ceremony this year was held at Oran Mor and was attended by a wide variety of actors, directors, designers, techs and marketers from all over Scotland. 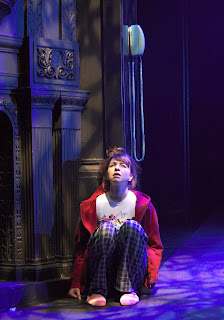 Kirsty Bushell as Harper in Angels in America. Photo by Manuel Harlan.

Amy Manson was also nominated for Best Female Performance for her role as Stepdaughter in our co-production of SIX CHARACTERS IN SEARCH OF AN AUTHOR, with Royal Lyceum Edinburgh and the National Theatre of Scotland. 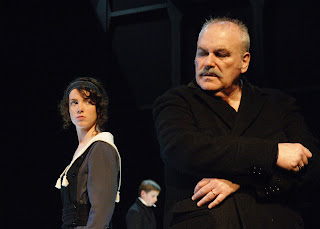 Amy Manson and Ron Donnachie in SIX CHARACTERS IN SEARCH OF AN AUTHOR. Photo by Richard Campbell.

I'm delighted to tell you that the Citz team brought home the gong for Best Technical Presentation, collected by our Head of Production Chris McDougall (although not actually collected due to the award suffering a mishap on the way to the ceremony!) and Amy Manson was the winner in her category for Best Female Performance.

Congratualtions to Amy and to all our backstage team who work incredibly hard and put in long, long hours to make sure that everything you see on stage is the very best it can be!

We would also like to extend congratulations to the other winners, all of which make up the rich tapestry that is theatre in Scotland.
Cx
Labels: Awards