Graham Sutherland on our statues. Part 2: the restoration

Graham Sutherland, our Head of Production, has been documenting the Citizens Theatre Building Redevelopment. In his latest blog post, he takes an in-depth look at the theatre's famous statues, which have been a distinctive part of the building's iconography for decades.

The sculptures have suffered over the years and required substantial restoration.  In Part 2 of our statues series, Graham shares the work of Scottish sculptor and painter David J Mitchell, who has restored the statues:

After we had vacated the building, sculptor David J Mitchell and his team, had to carefully remove the statues to move them to his workshop and start work on the restoration.

Browse our Flickr album for more photos of the statues being removed from the foyer: 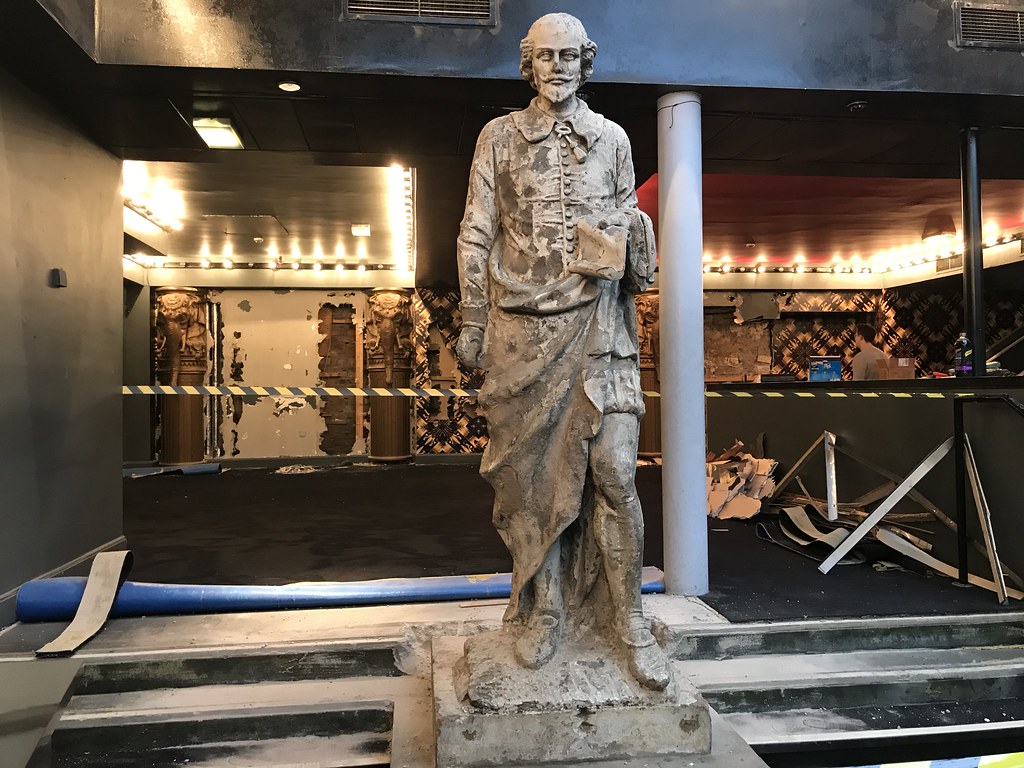 Once they were removed from the Citizens Theatre, they were transported to David’s studio space in Bellshill.

The plasterwork statues required some repairs and strengthening works (particularly the tusks which had taken a beating from children swinging on them over the years!)

They were then boxed up and shipped off to temporary storage with Scottish Opera who are looking after them for us until the new building is complete.

Burns, Shakespeare and the muses

The work that was required on the stone statues was a lot more involved. They had suffered all sorts of damage that needed to be remedied by the sculptor. When they were previously on the outside of the building, they had suffered from pollution and weathering. They had also been coated in white paint when they were out there that was now flaking off but had eaten into and damaged the surface of the sandstone. Various bits of stonework had been broken off, some of which had been diligently kept by the staff at the theatre, but others completely lost over the years.

Other statues had bits that had gone missing completely, but that we had photographic records of, which helped inform new components of the sculpture that David could make and incorporate. 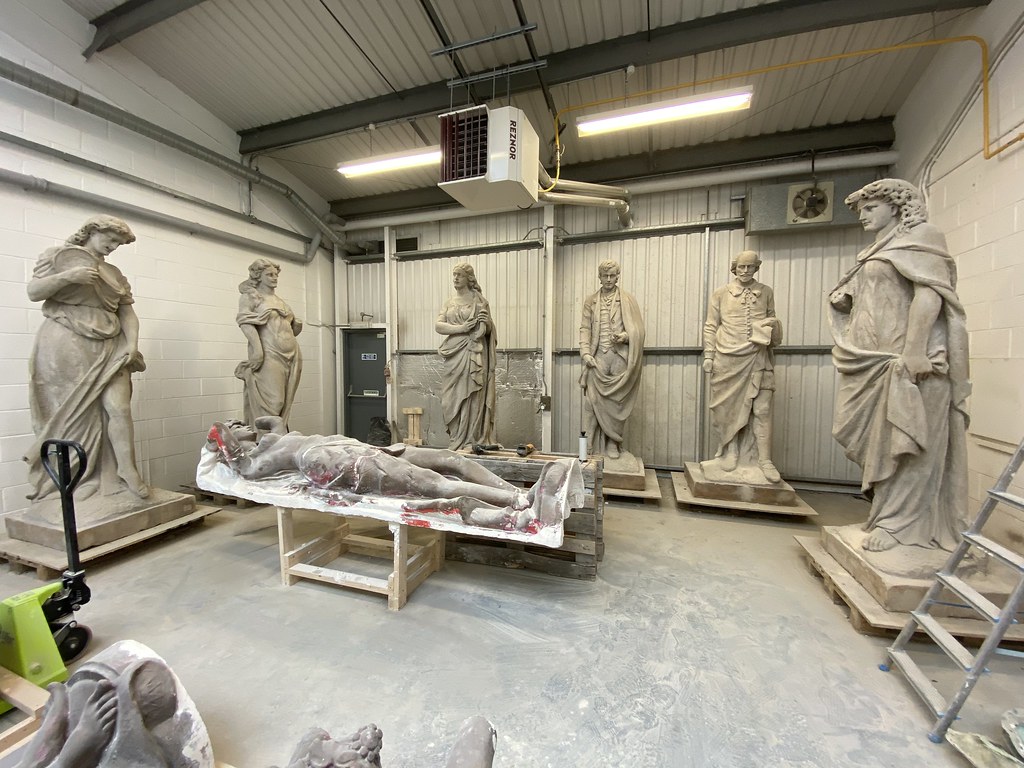 In 1977, the hand and mask were still attached to Thalia, the muse of Comedy, but it had gone missing by the time she got to the Citizens Theatre in 1989. The sculptor used the photographic record to create a replica.


Recently, sculptor David J Mitchell talked to BBC The Loop about his journey as an artist and his work on the statues.

Throughout the design process the architects, Bennetts Associates, have had the stone statues in various places within the design. At a time when the rest of Gorbals Street is being significantly regenerated with new buildings of scale all around us, they will once again take their place back on the top of the new building.

Whilst they have been in the studio, the design team have done a lot of work figuring out how they will sit on the outside of the building; both structurally and aesthetically.

Because of their return to the outdoors, and following advice from a specialist stone conservator within Historic Environment Scotland’s Conservation team, David also applied a specialist Keim coating to prevent any future damage from weathering. After that, they were ready to get transported back to the construction site.

The statues were wrapped in plastic for some short term weather protection but mainly to stop them gathering any dust and debris once they arrived back on the construction site. They were carefully forklifted out of the workshop and onto the truck. They were then secured with ratchet straps on the truck in much the same way as they were when they left the Citizens Theatre in 1977.

The statues are now back on site in what was the car park of the Citizens Theatre. Browse photos of their dramatic return to 119 Gorbals Street here. 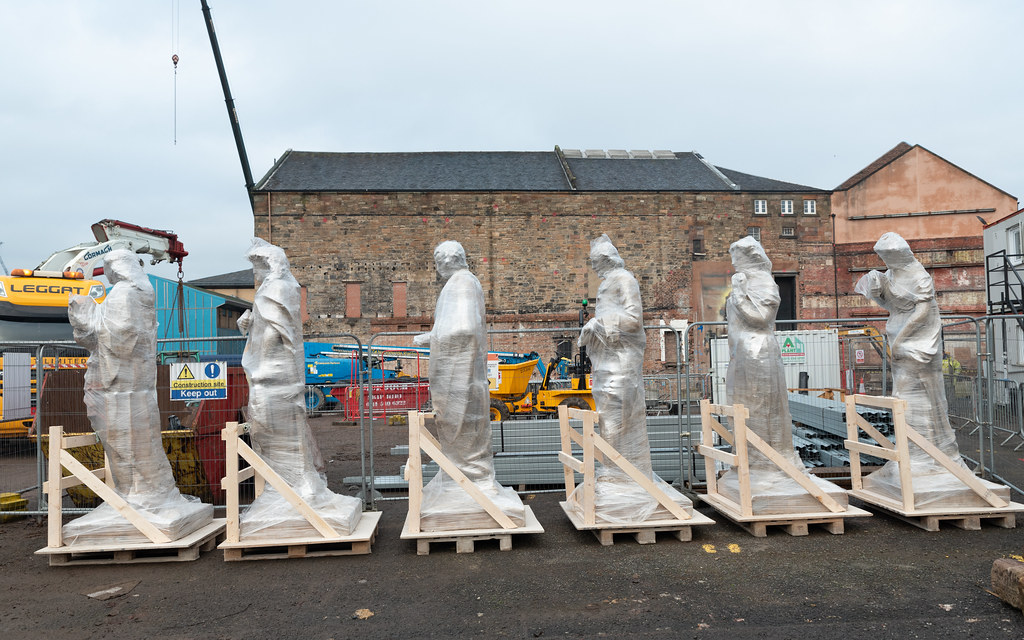 I am really looking forward to the day when these are craned up onto the front of the new building.

The statues of Burns, Shakespeare and the muses will eventually return to the top of our newly redeveloped building. You can read about the history of the statues in Part 1 of this series.

Written by Graham Sutherland for gsutherland.co.uk, as part of his most recent blog documenting the Citizens Theatre Building Redevelopment. He is Client Representative for the project. Graham will be continuing to blog about the project in the coming months.

As well as protecting the heritage of our much-loved building, the Redevelopment will transform our working spaces, making them more practical, accessible and inspiring for the many people that use them. We can't wait to re-open our doors and welcome a new generation of theatre-goers. We're halfway there as work on site continues, but there are still vital funds to raise to complete the project. Will you help us reach our goal?