Graham Sutherland on our statues. Part 1: the history

Graham Sutherland, our Head of Production, has been documenting our Building Redevelopment. Here, we share a preview of Graham's latest blog post which focuses on the Citizens Theatre's famous statues, which have been carefully restored as part of the project.

The familiar figures have welcomed audiences to the theatre for decades and in Part 1 of our statues series, Graham delves into the history of the statues, which have survived fire and demolition.

When I talk to people about the Citizens Theatre Redevelopment, one of the first questions I am always asked is, “What’s happening to the statues?” The stone statues of Burns, Shakespeare and the four muses, as well as the elephants and the nautch girls have been a striking component of the Citizens Theatre iconography for decades.

Until we moved out of the building, Burns and Shakespeare stood either side of the bar and the four muses were either side of the main entrance to the foyer. There were also four elephants on the same wall as the entrances to the main auditorium and upstairs were four nautch girls. 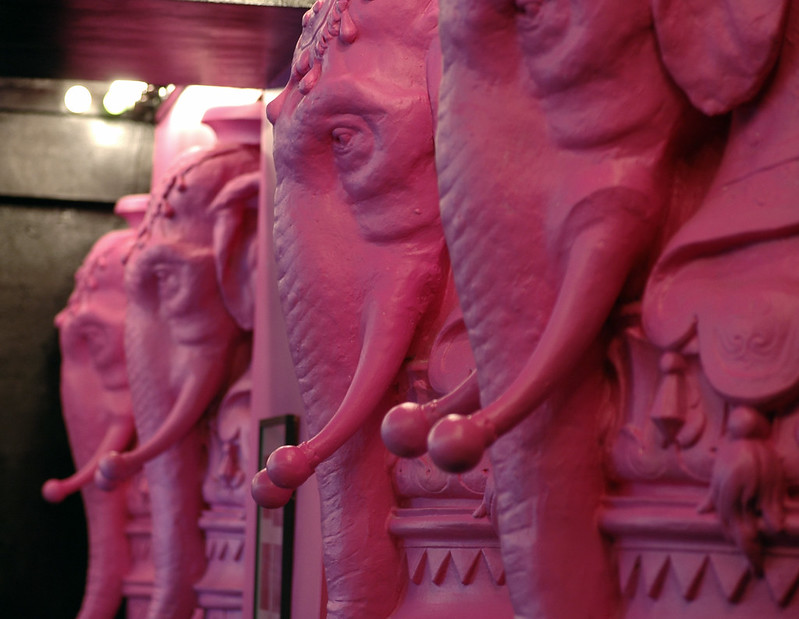 Burns, Shakespeare and the four muses

The six stone statues originally adorned the front of the building, sitting on top of a large columned frontage as part of a shared façade between the Palace Theatre and the Citizens Theatre. Both buildings, along with the tenements, were owned and developed by John Morrison who commissioned the shared façade.

He commissioned the statues from John Mossman, a prolific sculptor in his day and a contemporary of Alexander ‘Greek’ Thompson as well as being a founding member of the Glasgow School of Art.

The columns came from a project for the City of Glasgow Bank on Ingram Street after alterations that were carried out by Campbell Douglas and Sellars; the architects of the Citizens Theatre. The columns had been commissioned from Mossman for the bank but in the end were not required and so they were repurposed for the front of the theatre.

Of the statues, Robert Burns and William Shakespeare are recognisable, but lots of people ask who the muses are and what each one represents. The answer to that is not as straightforward as it might appear.

The muses originate from Greek mythology and are mentioned as far back as Homer’s Odyssey and Iliad around 700BC. According to legend, they are the daughters of Zeus and Mnemosyne who gave the babies to Apollo and Nymph Eufime. They grew up with a tendency for the arts to which they dedicated their lives taught by the god Apollo himself.

After the building first opened as Her Majesty’s Theatre and Opera House in 1878 (as it was called at that time), an article in a newspaper called ‘The Era’, made mention of the following

‘The frontage is in the Doric style, with a row of six fluted columns supporting an ornamental entablature, which is surmounted by six large figures. At the two extremities are capital statues of Shakespeare and Burns, the figures between them representing Tragedy, Comedy, Music, and Burlesque.‘

Based on this, we have always said they are Euterpe (Song and Poetry), Thalia (Comedy), Melpomene (Tragedy), and Terpischore (Dance). However, when you look at the typical attributes of those muses they are not a straightforward match.

The statues sat on top of the columns of the shared frontage between the Citizens Theatre and the Palace Theatre next door. The Close Theatre eventually sat in behind the columns at the first floor. People often wrongly assume that the statues belonged to the Palace Theatre, but as you can see in the photo above the original frontage was very much part of the Citizens (Princess’s Theatre as it was at that time).

I think part of this misconception is because the Citizens Theatre entrance eventually moved to the left and the frontage was taken down around the time that the Palace Theatre was demolished. Indeed, the statues were lucky to have survived at all.

On the 7th May 1973 a fire broke out in the Close Theatre on the first floor destroying it, and causing some damage to the adjacent Citizens Theatre and the Palace Bingo Hall (as it was known by then).

The Citizens suffered relatively minor smoke and water damage and reopened about a month later, but the Close was destroyed. The columns were held up by steel joists going back to the rest of the building and so remained. The council put a temporary roof above the Citizens Theatre foyer and stalls bar so that it could carry on operating.

In the 1970s, as was the case across a lot of Glasgow, wholesale clearance was taking place in the Gorbals, levelling the old tenements to replace them with high-rise buildings and motorways. Indeed, the city planned to demolish the Citizens Theatre to make way for an offshoot of the M8 with a proposed relocation of the theatre company into town. The plan was abandoned but not before the tenements and the Palace were already lost. 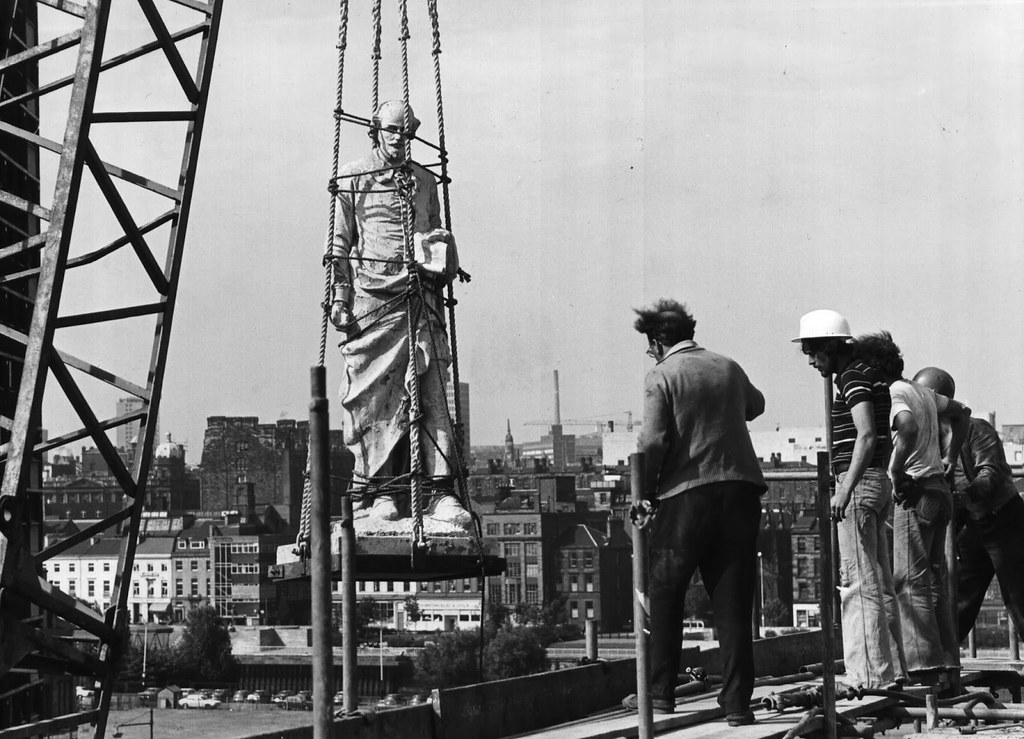 The tenements coming would mean that the frontage would be unstable and so it was condemned as well. It was reported in The Stage in July 1977 that the cost of demolishing the frontage was £30,000 but that an additional sum of £9500 was made available by the council to save the stone statues from the top of the building (no mean sum in 1977).

The statues were taken away and stored in a council depot with a view to returning them to the Citizens Theatre at some point in the future if they found the money to develop the building.

The elephants and nautch girls were originally part of the interior of the Palace Theatre auditorium next door. The Palace, designed by Bertie Crewe - who also designed The Pavilion in Glasgow - was a lavish affair with an Indian theme.

Not long after the shared frontage was demolished, and much to the horror of the Citizens Theatre staff, the Palace Theatre also started to be demolished. Clare Blenkinsop, the then General Manager of the Citizens Theatre, along with the Theatres Trust, managed to persuade them to stop work for long enough to allow some of the fixtures and fittings to be removed from the interior before they finished knocking it down.

And so the elephants and nautch girls came to the Citizens Theatre. A complete set also went to the Theatre Museum in London as well as a part of one side of the auditorium which they displayed (until it closed after which it went to the Victoria and Albert stores).

The stone statues went into storage with the council. Burns eventually made an appearance at the Tron Theatre in 1981 when the Glasgow Theatre Club (formed in 1978 to fill the gap in Glasgow after the Close Theatre burnt down) took over the old church at Trongate.

After a while, the muses returned to the front of the Citizens Theatre. Then in 1989, all six stone statues were reunited along with the elephants and the nautch girls in the Citizens Theatre’s newly created foyer spaces where they were a feature for almost thirty years.

Look out for part 2 in our statues series to find out how the statues have been restored and incorporated into the new design of the building.