Skip to main content
Labels
Posted by Citizens Theatre May 16, 2019

What Girls Are Made Of Review by Trudi 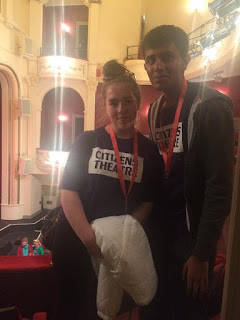 This personal reflection is on the play ‘What Girls Are Made Of’ by Cora Bisset. The play is written from Cora’s own diaries that she had kept when she was a teenager living in a town called Glenrothes in Scotland. It is a ‘gig-theatre’ piece that tells her strong rom being a young rock star to becoming the woman that she wanted to be. The play was shown at the Tramway Theatre on the southside of the city.

The first thing that struck me was that the stage was not raised which had the immediate effect of making me feel that I was not watching a play but that I was at a gig. It felt like a real gig at times with strobe lighting exciting me and spotlight lighting up the band members on stage. At other times the subdued lighting mirrored the poignant family story of Cora’s dad and the story of his dementia. I felt connected to the story line as Cora’s mother was very caring to her husband and it reminded me of my own grandparent’s situation. This was not sad for me but it was a part of the play that I felt connected to. The cast was made up of four actors who stayed present on stage at all times. I thought that the live band was made up of actors as they cleverly changed their voices and altered their body language for smooth transition to play another character. Of course, the highlight of the play was when Cora sang and she was full of energy. The music was in my opinion, too loud at times.

This did emulate a live band situation, although it did leave me feeling uncomfortable as I was seated and could not move around to escape the volume. Everyone around me sat transfixed by her voice and by the stories behind her songs. When she sang, I felt that she meant every word. Throughout the whole play, there was a fourth wall which I felt ensured that the audience was watching a story being told, and yet played a clever trick by making the audience feel that they were taking part in a live gig. At the moment I am around the same age (16 years) that Cora would have been when she joined the band.

I think that I am too young to understand fully what she experienced within the music industry and feel that part of her story was lost to me. However I also think that if it was not for her diaries she would not have had the chance to reflect on her story and make sense of it as an adult. Overall, I enjoyed the story of Cora and how her life in music and family life have made her who she is today. I hope that she still writes into her diaries and I hope that she
Labels: Citizens Learning Saturday Citizens what girls are made of

Unknown said…
Do you realize there is a 12 word phrase you can say to your crush... that will induce deep feelings of love and instinctual attraction for you deep inside his chest?

That's because hidden in these 12 words is a "secret signal" that triggers a man's impulse to love, admire and look after you with all his heart...

This impulse is so hardwired into a man's brain that it will drive him to work harder than before to love and admire you.

As a matter of fact, triggering this powerful impulse is absolutely important to getting the best ever relationship with your man that once you send your man a "Secret Signal"...

...You will immediately find him expose his soul and heart to you in a way he's never experienced before and he'll recognize you as the one and only woman in the galaxy who has ever truly attracted him.
16 March 2020 at 21:16