Skip to main content
Labels
Posted by Citizens Theatre May 08, 2019

The story of our Silent Heroines

"I was struck by the sheer integrity, beauty and honesty of the performance. The sharing of life stories through recordings, coupled with music choices to complement and support the personal testimonials, was a powerful experience. As I laughed, cried and danced with the women on stage, I knew that we had to be part of this fascinating and evolving international movement of connecting women." Elly Goodman

Our Community Drama Artist Elly Goodman attended her first Silent Heroines' Disco at the International Community Arts Festival in 2017 and knew straight away that she wanted to get involved with the project.

Originally created by Rotterdams Wijktheater Women Connected, a community arts network in Rotterdam, the Silent Heroines' Disco is an alternative audio and immersive theatre piece performed by an all-female cast. Through headphones the audience listen to the women's deeply personal stories of loss, dreams, strength and survival before joining them for a party on the dance floor! This intimate performance technique gives a platform to the women whose voices are rarely heard and provides a unique insight into their lives.

Inspired and enthusiastic, Elly brought the idea back to Scotland and together with our Community Drama Worker Carly McCaig, co-created and organised the Citizens' first ever Silent Heroines' Disco. A group of 12 women living in Glasgow developed a performance exploring their own life experiences.


The first Scottish Silent Heroines' Disco was a great success. One participant described the project:

"From the first workshop I was hooked. Everyone's amazing stories and experiences woven into music then fed directly into your ears. It takes a bit of getting your head around but it just works and almost transforms into something different. It's like a kind of alchemy."

You can browse more pictures from the inspiring event here.

More recently, Elly and Carly travelled to The Netherlands for the Silent Heroines' Disco XL, a celebration with 1,000 women of all cultures, generations and backgrounds telling their stories together at Theater Rotterdam. Here, Elly and Carly tell us all about their visit:

"From the moment we entered the Theatre Rotterdam, we were struck with the sheer amount of women taking part in the rehearsal. Some women were on the stage in a wonderful array of vivid traditional costumes, others were sat quietly in the seating banks while all being communicated to by Director Kaat Zoontjens via a microphone directly linked to their headphones.

We were promptly handed headsets and we watched the rehearsals unfold. There were women from many different countries sharing stories that explored marriage, children, ageing, cultural restrictions and celebrations, bereavement, gender, elderly v young people, traditional dance and more. We tuned into the Dutch language as best we could, and it soon became apparent that the themes being explored on stage were universal and recognisable despite the language barrier.

Having worked on large scale productions before, we were well versed in the enormity of producing a show, but perhaps not quite of this scale! We were more than happy to lend a hand to assist this remarkable theatrical undertaking.We were pleased to spend time with Kaat and Inez whilst they went through their lighting cues in the technical rehearsal and lend support on the stage.

On the day of the performance we busied ourselves with the efficient production team and made sure that the dressing rooms backstage had everything required for the performers from posters adorning the walls to comment and reflection books. As the time drew closer to the show we ushered the 200 strong cast onto the stage for their final notes from Kaat and were then stationed in the Dress circle armed with 1000 headsets to hand to the audience as they made their way to their seats. The auditorium was packed and it was wonderful to witness the entire audience experiencing the show through the headsets.

The atmosphere was incredible as the audience followed the stories and enthusiastically joined in when it was required. As the performance drew to its close the audience rose to its feet in a standing ovation and then joined the cast on stage as the disco took hold. Those who couldn’t make it to the stage started dancing in their seats and the aisles.

It was clear that the event had been an utter triumph for those who had taken part and for the people who witnessed it. The foyer was packed with people eating food, sharing their feedback and congratulating the performers. It was an affirming sight to see so many women of different nationalities, ages, cultures, background and walks of life celebrating together in one space. We came away reeling from the event and excited about our visit."

You can read more about the event on the Theater Rotterdam website, and browse some pictures from the epic performance below: 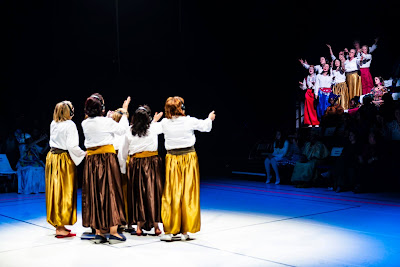 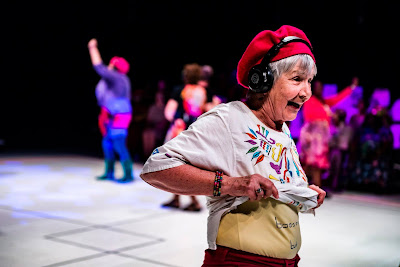 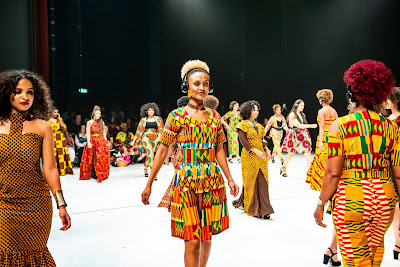 We've loved collaborating with and learning from Women Connected and look forward to continuing our international partnership. Keep an eye out for more projects coming soon!

The Citizens Theatre has a long history of working with women’s groups in the community. Through a variety of different projects and workshops, our talented Learning team create a safe space for women to explore issues that impact their lives. Read more about some of our other Learning projects for women here.