How sound was used in Nora: A Doll’s House

We caught up with Michael John McCarthy, our composer and sound designer for Nora: A Doll's House who explained how sound was used to emphasise moments which were particularly important in the play and related to its main themes and issues.

Both the sound and the music were created by MJ in the rehearsal room and were designed to complement the emotional journey of the play. It also helped us tell the story: the Noras have a chord that is played when the play fractures into their monologues and poetic sections. The sound is also used to mark the shifts in time: we found a combination of strong physicality from the actors, a lighting shift, and a sound moment an effective and precise way of jumping between 1918, 1968, and 2018 in a matter of seconds.  We used some of MJ's original music in our trailer for the play. 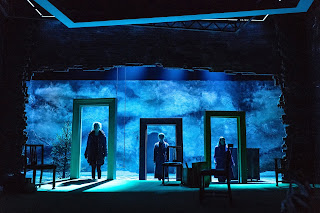 MJ explained "There's an extent to which the use of sound in Nora is all built around one moment of silence. Even as the audience enters the auditorium before the show begins, there is a very low level room-tone (a bit like the sound of a very quiet air conditioning system) playing through the speakers. It's barely perceptible but you'd notice the difference if it was switched off. Throughout the production various layers of music and sound come and go, always with an atmospheric layer in the background, leading up to the moment where Thomas leaves the room after almost hitting Nora. It was the director's wish, from our very first conversation, that this moment where each Nora realises that she is about to leave her home and family, would be the first and only moment of silence in the entire production. I don't know if many or any audience members are aware of this silence, but my hope is that they feel the difference it makes, even if they couldn't say exactly what has changed."

JS Dolls said…
If you want to purchase Buy Sex Dolls, we have the best collection of sex dolls to fulfill your desires. So visit JS dolls and get the best dolls according to your requirements.
28 August 2020 at 12:20

ROCKY said…
school audio system, Very efficiently written information. It will be beneficial to anybody who utilizes it, including me. Keep up the good work. For sure i will check out more posts. This site seems to get a good amount of visitors.
18 February 2021 at 11:26

Sex doll has become the best companion for men to provide more pleasure and fun in their sex life. These cheap sex dolls provide feel like a real human and the best way to invest money with their many benefits.

jones said…
Thanks for your wonderful article regarding sex dolls ,big breast masturbators,we wish to inform you and your audience that, We have good content which can provide meaningful contribution to your article,here at hotties sex dolls ,we have available the best sillicon sex dolls but male and female sexy in shape ,in addition we also have breast marstubators and many more sex dolls products .for more details.
for more informations reach out to us via the following listed details below.

jones said…
hi intresting article about,buy sex dolls, we have interesting content which might help you and your audience regarding the above mentioned,for more details ,
26 March 2022 at 14:34