How movement was used in Nora: A Doll's House 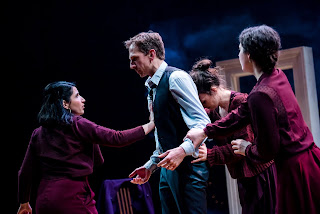 "We had a lot of workshop time at the beginning of our rehearsal process to discover the role of movement in the production. The narrative shifting between time periods was a clear starting point in the cast physically developing characters who convincingly existed in each of those periods, and in enabling them to shift rapidly between those characters in differs eras.  We also did a lot of work with the three actors who play each Nora and Christine in devising a commonality in the Nora’s and the Christine’s physicality that could exist across each of the time periods and unify them in some way.

In the building of the character relationships we did a lot of work on the space/distance between characters, tension levels, pace, levels of threat, physical manipulation and the levels and methods of physical contact between characters. Defining these for each character and each relationship in turn helped us tell the story of the control/power balances, not only between the characters but in each of the Nora’s overarching relationship with the time period she lived in and what expectations and elements of control that era placed on her.

In addition, the theme of emotional repression and consequent emotional release running through Stef’s script, for me felt like such an important element of the piece and hugely influenced the overall movement language that we developed."