Behind the scenes with costume designer Kenneth MacLeod

Ahead of the opening of The Dark Carnival, our co-production with Vanishing Point, we caught up with the talented Kenneth MacLeod who designed the set and costumes for this production.

Kenneth kindly shared his notes on three of the main characters and his original sketches, to show just how he brought them to life (or death as the case may be!). 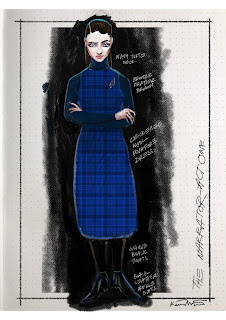 The Narrator – played by Elicia Daly

The Narrator is the first character we meet in the Dark Carnival, and one of the most mysterious. All we know for sure is that she’s our guide to the proceedings. Her costume has a few subtle hints as to her true character. Overall she’s in a period of her own, but borrows a lot from 1950s and 1960s work wear. 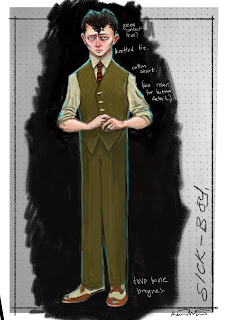 A lot of the early design work for The Dark Carnival was examining the approach to burial clothes in the various periods our characters hail from. Young John, who has died young, is in smart clothes befitting a young man from a respectable background. 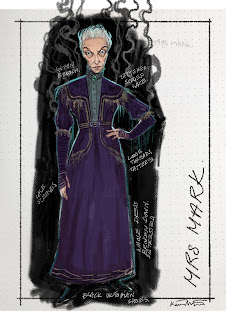 Mrs Mark has died far earlier, and while her costume has evolved since this early rendering, the concept has remained. Buried in the late Victorian era, his costume still has singed edges from her fiery demise.

With sixteen performers and musicians, we hope that you'll join us in the graveyard for this music and theatre spectacle!

The Dark Carnival runs from 19 February to 2 March at Tramway. Find out more about the production and book tickets.