Skip to main content
Labels
Posted by Citizens Theatre May 31, 2016

Well, we couldn't announce our exciting new season without referencing one of the most memorable film openings of all time, could we?

A new stage production of Irvine Welsh's Trainspotting headlines our Autumn 2016 season, 22 years after the story first began life as a piece of drama right here at the Citizens Theatre. Read on to find out more about the fantastic shows we've got coming up at your local theatre from August 2016 - January 2017. 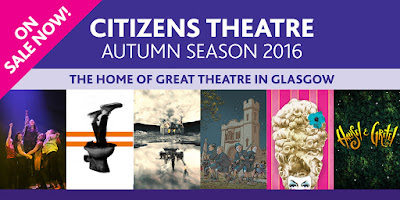 The Glasgow Girls are coming home! The real life story of seven feisty teenagers from Dumchapel High was turned into a high-energy, life-affirming musical by Cora Bissett and David Greig and was first premiered at the Citizens in 2012. Since then, the show's been revived here, shared the stage with Nile Rogers at the Ryder Cup Gala Concert, and will have a run of performances at the Edinburgh Festival Fringe this summer before coming home.

We are the Glasgow Girls!

With a sequel to the Trainspotting film currently in production, here's a chance to experience the original coarse, intense and often hilarious story on the Citizens' stage. Renton, Sick Boy, Begbie and Spud hurtle their way through the darkest backstreets of the heroin scene of Thatcher-era Leith in the generation-defining cult phenomenon. Our Main Stage Director in Residence Gareth Nicholls will direct. We've loved his thoughtful and thought-provoking productions of Into That Darkness, Blackbird and Vanya and can't wait to see his version Trainspotting.

THE CHEVIOT, THE STAG AND THE BLACK, BLACK OIL 18 - 22 Oct
A Dundee Rep production

Dundee Rep's new production of this favourite piece of 20th-century Scottish drama by John McGrath was a sell out in 2015. They're now hitting the road with this fantastic production, and will play at the Citizens Theatre for one week only in October. There's already been huge demand for tickets, so if you fancy joining us for an evening of ceilidh, song, political history and loads of laughs, don't leave it too late to book!

We'll be welcoming 60 non-professional performers from our community to our stage to recreate the bizarre events that took place at the Southern Necropolis over 60 years ago. One night in September 1954, hundreds of children aged 4 - 14 armed themselves with whatever they could find and began a chaotic hunt through the Gorbals for the mysterious - and fictitious - Gorbals Vampire, or The Man With the Iron Teeth. Johnny McKnight's tongue-in-cheek script brings the dramatic evening back to life.

Big wigs, big frocks, cheeky humour and plenty of over-the-top silliness. That's what's in store in our production of 18th-century comedy of manners The Rivals. Set in high society Bath, the play bubbles with scandal, wit and intrigue. Our Artistic Director Dominic Hill directs the co-production with Bristol Old Vic, who we last visited in 2014 with The Libertine and Liverpool Everyman & Playhouse who we've previously worked with to produce Observe the Sons of Ulster Marching Towards the Somme and Crime and Punishment.

Dominic Hill also turns his hand to our Christmas show this season, Hansel and Gretel. A temptingly sweet festive treat, expect plenty of the Citizens' traditional theatrical magic combined with world-class storytelling, suitable for everyone aged 6+.

What are you most excited to see in our new session? Tweet us with #CitzAutumnSeason to let us know!