David Harrower's 21st-century Scottish classic Blackbird came home to roost this week in a new production directed by our Main Stage Director in Residence Gareth Nicholls.
Audiences and critics have been gripped by this ("immaculate production" The Scotsman ★★★★) which only runs until this Saturday 5 March.


"a thrilling but gruelling ride" The Reviews Hub  ★★★★ 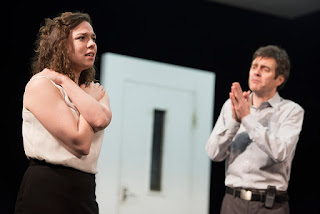 Paul Higgins has been winning praise for his role as Ray, the man who at the age of 40 entered into a sexual relationship with a twelve-year-old girl. Paul's TV roles include Michael Dugdale, the senior civil servant in Utopia who finds himself the victim of blackmail on an epic scale thanks in part to his own marital infidelity.

"Higgins’s Ray (known in his new life as 'Peter'), is a remarkably nuanced picture of barely sustained indignation mixed with regret, affection and fear. At times, his body language suggests that he is shrinking, as if he wants to disappear." The Telegraph ★★★★

"richly ambiguous two-hander, with Paul Higgins and Camrie Palmer excellent as the tortured pair" The Guardian ★★★★

Blackbird deals with a subject that continues to make headline news. There's no simple answers, but plenty of complicated and sometimes uncomfortable questions about morality and judgement that have been provoking long post-show chats in our bar.

#Blackbird & @phigster @citizenstheatre is a must see. A thought-provoking take on an uncomfortable subject which invokes so many emotions.
— Tracey (@Eviternal) February 28, 2016

I don't comment on everything I see but I have never been so engrossed in a play Blackbird @citizenstheatre @phigster @Camrie_Palmer class
— Joe Rising (@mrjoerising) February 27, 2016

See more of what our audiences though about Blackbird