Copied or stolen, Alasdair Gray's novel Lanark - A Life in Four Books is full of references, ideas and re-appropriations of others' works. 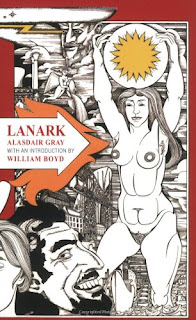 Plagiarism (taking someone else's work and passing it off as your own) is one of the defining elements of the postmodern movement. Music, films, art and writing that is described as postmodern often uses elements of earlier styles, or mixes together different media and styles to create something new.

For example, Baz Luhrmann's Moulin Rouge! uses lines, tunes and lyrics from famous love songs and stitches them together to create the soundtrack for the film.

Vanilla Ice settled out of court for an undisclosed sum after his track Ice Ice Baby sampled Queen and David Bowie's Under Pressure without permission.

Lanark is often described as a masterpiece of postmodernism, in part thanks to its open and liberal references to other works. Alasdair Gray fully acknowledges the various influences on Lanark - A Life in Four Books, choosing to include a famous index of plagiarisms in the novel.

Similarly, the creative team for Lanark - A Life in Three Acts have been inspired by a whole host of music, films, theatre, novels, and have made a list of how those inspirations have been translated into their work. 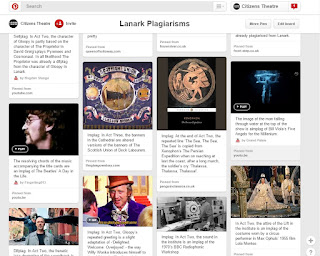 We've put together a Lanark Plagiarism Pinterest board showing how Willy Wonka, The Beatles, Logan's Run and Corrie's Bet Lynch have all provided the source for the creative team's ideas for the show.

Why not see how many you can spot when you come to see Lanark at the Citizens Theatre from 14 - 17 August or 3 - 19 September? Maybe you'll spot some more of your own!

If you'd like to find out more about the inspirations behind Lanark, book now for one of our pre-show events, timed to take place before performances of Lanark.