The Citizens Dream Players they will play the roles of the ‘Mechanicals’ when the production visits the Citizens Theatre between 29 March – 2 April 2016.
100 amateur actors from across Glasgow auditioned for the RSC in February 2015. From the wealth of Glasgow talent, The Citizens Dream Player have been formed. They will take on the roles of the 'Mechanicals', the under-prepared, yet loveable bunch of craftsmen and women who put themselves forward to entertain royalty at the end of the play. 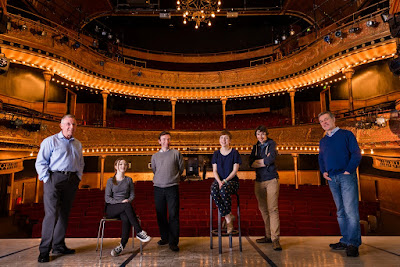 Left to right: Bill Whiland (Snug, the Joiner), Emma Tracey (Starveling, the Tailor), David Scanlan (Quince, the Carpenter), Katy Thomson (Snout, the Tinker), Alistair Wales (Flute, the Bellows Mender) and Martin Turner (Bottom, the Weaver).
Bill Whiland, a former policeman has just started acting but it has always been a lifelong ambition to perform on stage.
Glasgow born Emma Tracey is currently studying acting and performing at Glasgow Clyde College and has been acting since she was 10.
David Scanlan from Paisley has been acting for four years and currently holds a BA in Commercial Music from University of Paisley.
Both Katy Thomson and Alistair Wales began acting from an early age. Katy joined her local theatre group at age seven and Alistair has been acting since he was eight years old. Their roles as Flute and Snout will be the first time they have performed Shakespeare.
Martin Turner has been acting in amateur productions for 40 years, the father of two has starred in A Midsummer Night’s Dream before as lover Demetrius and this will be his first time playing Bottom.

The group will perform alongside a cast of 18 professional actors and a professional creative team, led by RSC Deputy Artistic Director, Erica Whyman.

A Midsummer Night’sDream: A Play for the Nation will visit 12 theatres in each region and nation of the UK between 17 February and 4 June 2016, and will involve 14 different amateur theatre companies.  In each theatre a different local amateur theatre company will play the Mechanicals, and local school children will take part as Titania’s fairy train.
Tickets for A Midsummer Night’sDream are on sale now and available from citz.co.uk or by calling the Box Office on 0141 429 0022.
Labels: a midsummer night's dream royal shakespeare company the citizens dream players