The real life story behind 'The Slab Boys' through the A. F. Stoddard Carpet factory Archive 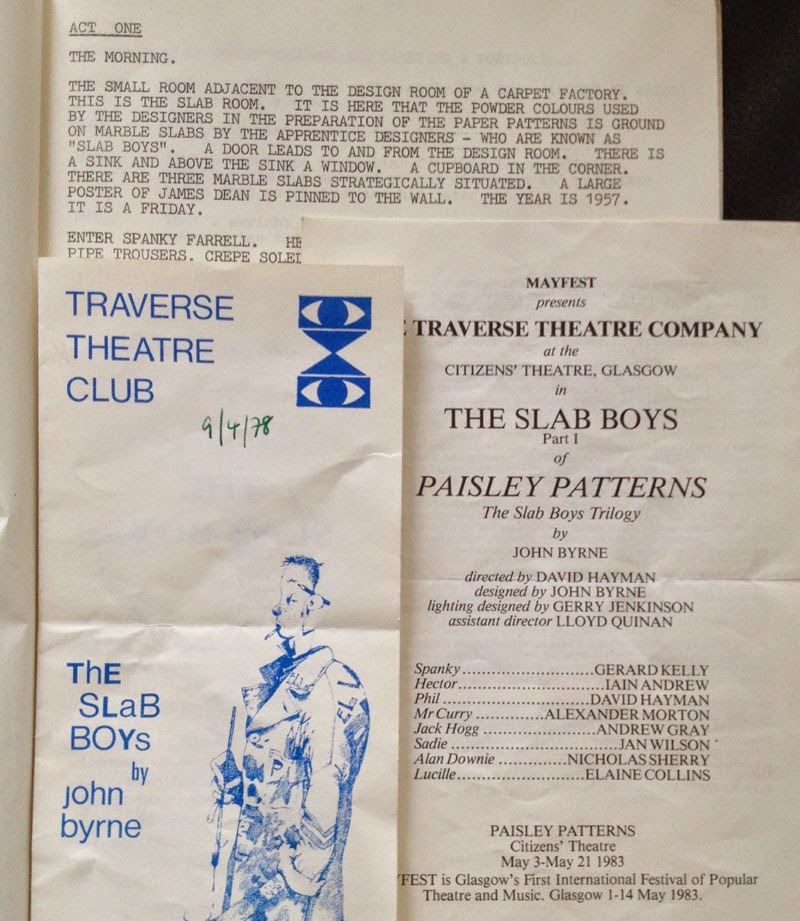 As part of the research for The Slab Boys, our designers and backstage team enlisted the help of the University of Glasgow Archives, which hold the Stoddard-Templeton Collection - a huge archive from James Templeton & Co. Ltd. and Stoddard International plc., two of Scotland’s most significant and influential carpet designers and manufacturers.

In this blog post, Rachael Egan, from University of Glasgow Archive Services, shares some of the interesting anecdotes and stories from the collection.


The University of Glasgow has had connections with the Citizen’s Theatre, Glasgow, since its inception in 1943, with one of the founders, James Bridie (aka Osborne Henry Mavor) graduating from the University with a medical degree in 1913. James Bridie threw himself into University life at Glasgow, regularly writing for the student magazine and inventing the now traditional ‘Daft Friday’ celebration at the Glasgow University Union.

Moreover, Special Collections within the University of Glasgow Library holds the records of the Glasgow Citizens' Theatre Company as part of the Scottish Theatre Archive.

With the opening of the most recent production of John Byrne’s The Slab Boys at the Citz this month, another connection between the University and the Theatre has become apparent. The University of Glasgow Archive Services holds the records of A.F. Stoddard & Co, the Paisley based carpet factory in which John Byrne worked, and the stimulus for his play. Through these records we can reveal the real life stories of carpet factory staff in Paisley, like The Slab Boys.

The records of A.F. Stoddard & Co. Ltd. form part of the ‘Stoddard-Templeton Collection’ which encompasses the design library, design archive and heritage carpet collection of James Templeton & Co. Ltd. and Stoddard International plc.: two of Scotland’s most significant and influential carpet designers and manufacturers. The collection is managed by the University of Glasgow, the Glasgow School of Art and Glasgow Life and here at the Archives we hold the fascinating corporate records which tell us about the running of the company and the lives of the staff who worked there.

A. F. Stoddard & Co Ltd was one of the United Kingdom’s leading quality carpet manufacturers. Dating from 1862, the company enjoyed success in domestic and commercial carpet production. Our staff records for the company span the decades in which the factory operated and include: staff wage and salary books from 1863, minute books relating to the management of employees from the 1920s, and records of celebratory staff dinners, or ‘Staffie’s, for example an invitation and a menu for the Centenary Staff Dinner in 1962.


Staff photographs are also a great way to get an idea of what it was like to work for Stoddard’s, the machinery used to weave the carpets, and also what staff got up to when they weren’t hard at work! We have a great collection of staff photographs for A.F. Stoddard with many staff named, creating a great source for family history!

We also have a collection of House Magazines spanning 1951-2001 to which employees were encouraged to submit articles, photographs, poems and other contributions and which were circulated throughout the factory to share news and stories. A team of "Magazine Correspondents" covered all departments and compiled articles about staff sports teams and clubs, events, trade, designs, poems, puzzles, household hints, and personal news such as marriages, births, retirements, and deaths.

These publications contain a wealth of information and provide a fascinating insight into the history of company and the day-to-day lives of its employees.

Within the Glenpatrick Journal (the first incarnation of the A.F. Stoddard staff magazine) we learn about the struggles of the Stoddard Football team, the ‘Glenpatrick Amateurs’, as they try to defeat opponents such as the ‘Newton Swifts’ while in the annual staff football match on 23rd April 1951, ‘The General Office and Designers’ defeated the ‘Time Study Office and the Draughtsmen’ by 5 goals to 1! We also find out about the ‘Stoddard Dramatic Club’s new three-act comedy, titled ‘Staff Dance’, presented at Elderslie Village Hall, on 7th November 1952. The play was well received and described as ‘a really first class show’ in the staff magazine!

We are told, in a 1965 edition, that in an average year Design Studio staff:


In fact, you may see a representation of these staff magazines on the set of the production, as Citizens Theatre Assistant Stage Manager, Barry, visited our searchroom to research the house journals.

As well as these staff records, which give a great window onto the lives of the real-life  ‘Spanky’s , ‘Phil’s,  ‘Hector’s , and ‘Jack’s , we also hold the design archive, comprising of hundreds of beautiful painted carpet designs (the work of the ‘slab boys’, designers, draughtsmen, and artists) in many different styles from which the carpets would have been woven.

If you’re interested in the Slab Boys as a play, check out the Scottish Theatre Archive  at the University of Glasgow Special Collections. Here you can find scripts, programmes and publicity relating to previous productions, including the 1978 world premiere: original cast members included Robbie Coltrane, Billy McColl and Ida Schuster. The Slab Boys became Part I of Paisley Patterns, a trilogy of plays by John Byrne which included Cutting’ a Rug and Still Life, all performed at the Citizens’ Theatre in 1983. The Scottish Theatre Archive holds material documenting the careers of many actors, writers and designers including David Hayman and John Byrne.


If you would like to see any of the Stoddard collections, or have any questions about life in the carpet factory please e-mail us on: enquiries@archives.gla.ac.uk

For any questions about the Scottish Theatre Archive collections please e-mail: special@lib.gla.ac.uk

Stewart R said…
Having started my career as a carpet designer at BMK one of the rival companies to Stoddards that was later taken over by them, I have fond memories of mixing colors for the older designers. By the 70's, the job of grinding solid paint into a usable paste had been partially mechanized and the pigment was placed in large plastic jars with water, gum Arabic and pebbles. A machine with rubber rollers turned the jars for hours and produced the liquid paint we used to paint both sketches and 'point papers' which were the technical designs used to provide instructions to the spooling department prior to weaving. Latterly designers switched to using pre made gouache by Windsor & Newton. I have met John a couple of times and have always admired his style and attitude to life. Many of the designers I worked with had known him and remember him fondly. He was always a flamboyant character appearing in the studio in a full length 'duster' coat and white furry ski boots at one point. He must have been quite a striking site in the tiny village of Elderslie, where the factory was located. I also recalled John's disappointment when Stoddards wouldn't let him film any of his movie version of the play in the factory or studio. I once found some unfinished paintings by him of the directors of Stoddards painted in John's characature style. But the directors took it badly and the work was never completed or shown to anyone.
23 November 2020 at 00:02

Rugs N Riches said…
Thanks for sharing this wonderful blog. A house is never complete without a carpet or an area rug. Carpets enhance the look and feel of any interior at your home. Choose from a wide variety of living room carpets & designer rugs online made by Rugs N Riches the best carpet manufacturer in India