Looking Back at 2014 at the Citizens Theatre 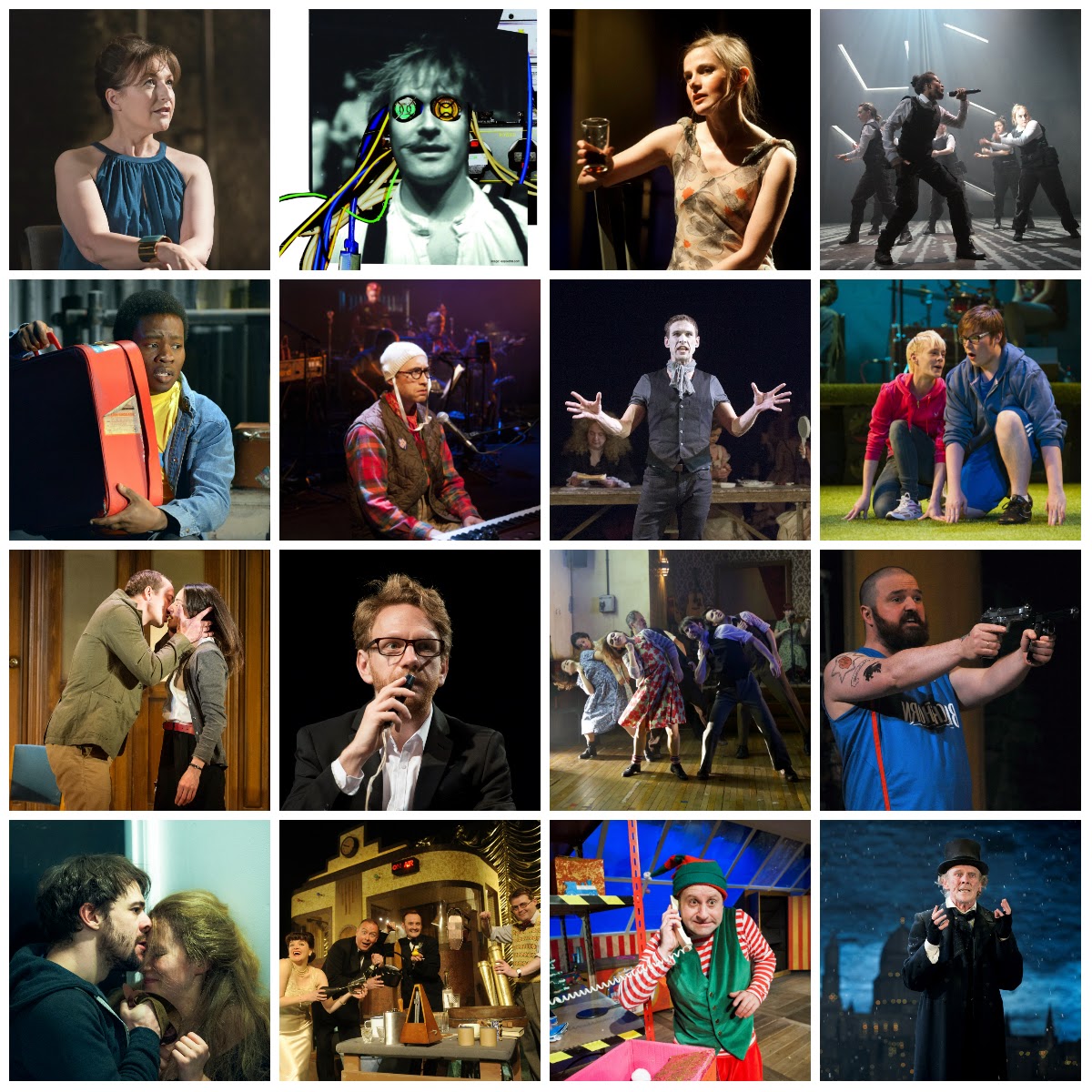 The wonderful Blythe Duff started our year with the Traverse's Edinburgh Fringe Festival hit Ciara, David Harrower's monologue written especially for her. Blythe won the Best Female Performance in the Critics' Award for Theatre in Scotland for her role as the daughter of a Glasgow crime lord.


The anarchic Filter partied like it was 1599 in their re-imagining of Shakespeare's Twelfth Night. Free jazz, tequila, gold hotpants and conga lines all helped to put a 21st-century slant on the classic work. Filter are returning this January with their version of Macbeth.

Fresh from her appearance over the Christmas season as pathologist Molly in BBC's Sherlock, Louise Brealey played the title role in Zinnie Harris' adaptation of Strindberg's Miss Julie, directed by Dominic Hill. The tale of class, gender and sexual politics created a gripping and tense atmosphere, and that wasn't just from all the Sherlock fans hoping to bag a selfie with Louise in the foyer bar.

The return of the superb Glasgow Girls, our co-production with National Theatre of Scotland Theatre Royal Stratford East, Richard Jordan Productions Ltd and Pachamama Productions, in association with Merrigong Theatre Company (Australia), got everyone on their feet to the beats and kicked off a year of gripping politics on and off stage. In October, the girls took to the Ryder Cup Gala Concert stage with Nile Rogers, Jake Bugg and others to share their great big Glasgow hearts with the world. 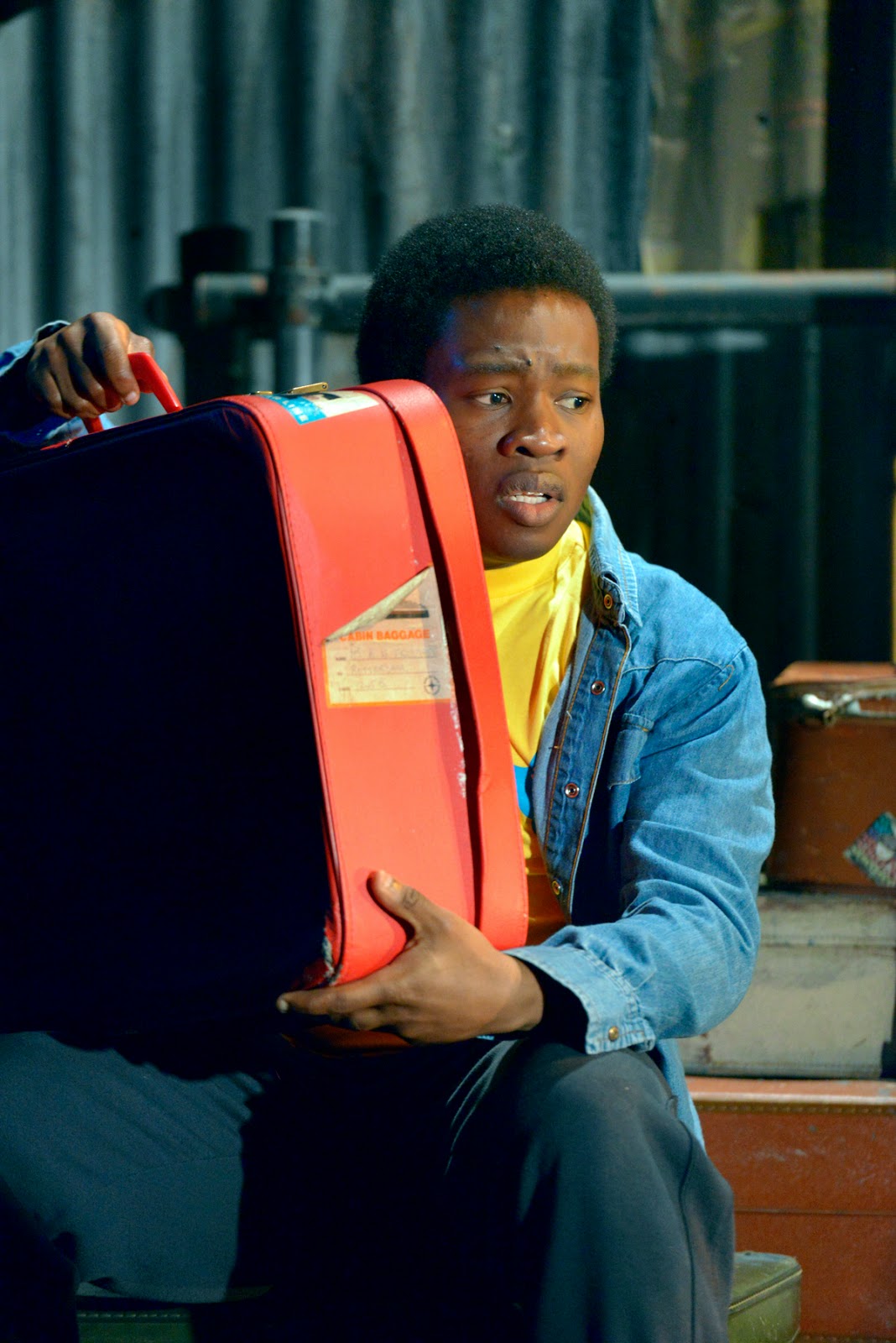 West Yorkshire Playhouse (who we partnered with in 2013 on Doctor Faustus) brought Benjamin Zephaniah and Lemn Sissay's Refugee Boy to Glasgow. In the weeks leading up the performances, our learning team worked with a group of Scots, refugees and those seeking asylum in the UK to present Belong which was a wonderful afternoon of music, food, stories and joy. 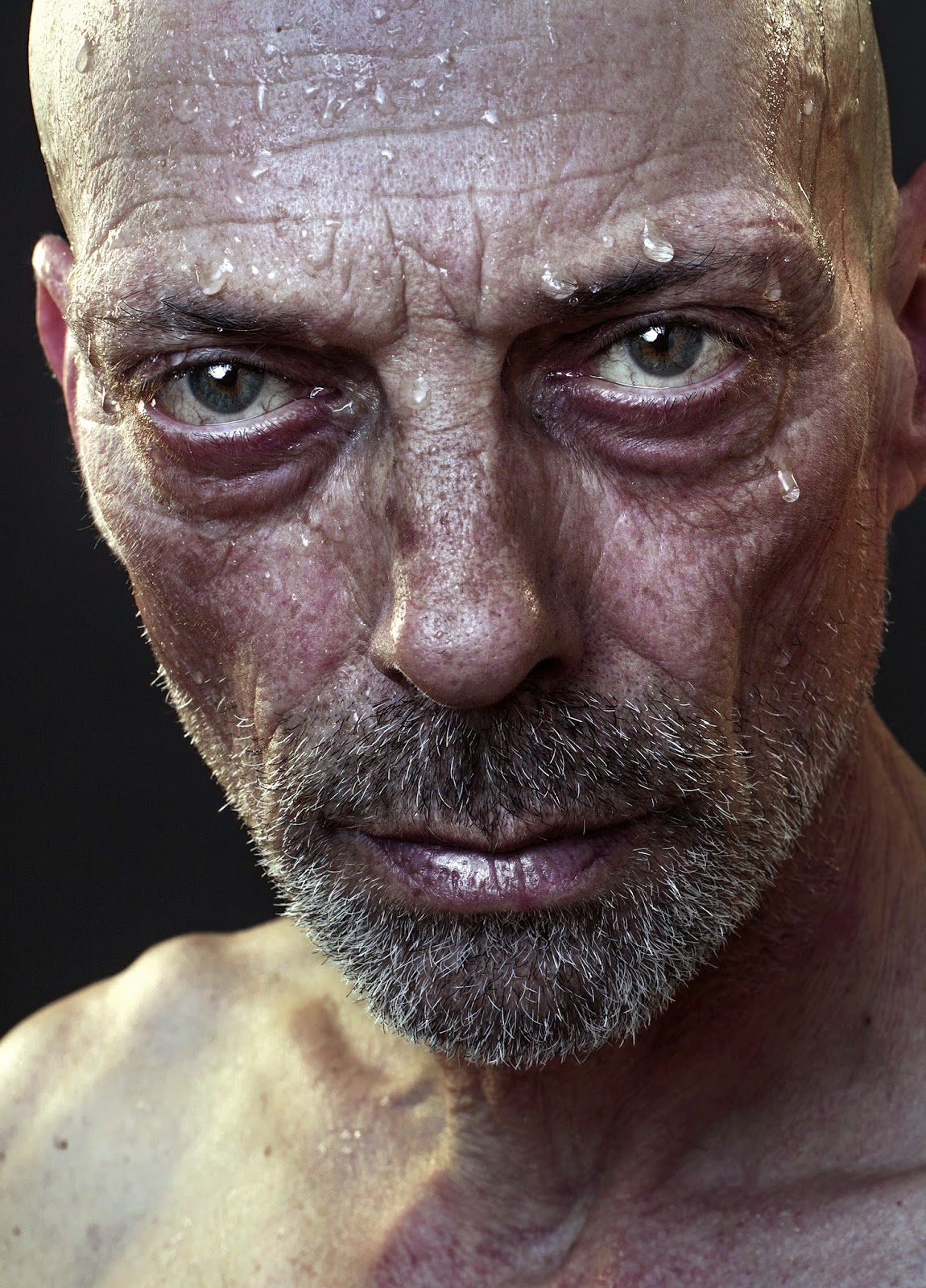 Shakespeare is no stranger to the Citizens stage, but it's not often we see his work as an opera or have to find space for some timpani in the stalls. Scottish Opera revived Dominic Hill's 2005 Macbeth by Guiseppe Verdi, which opened at the Citizens Theatre before touring theatres and venues across Scotland. 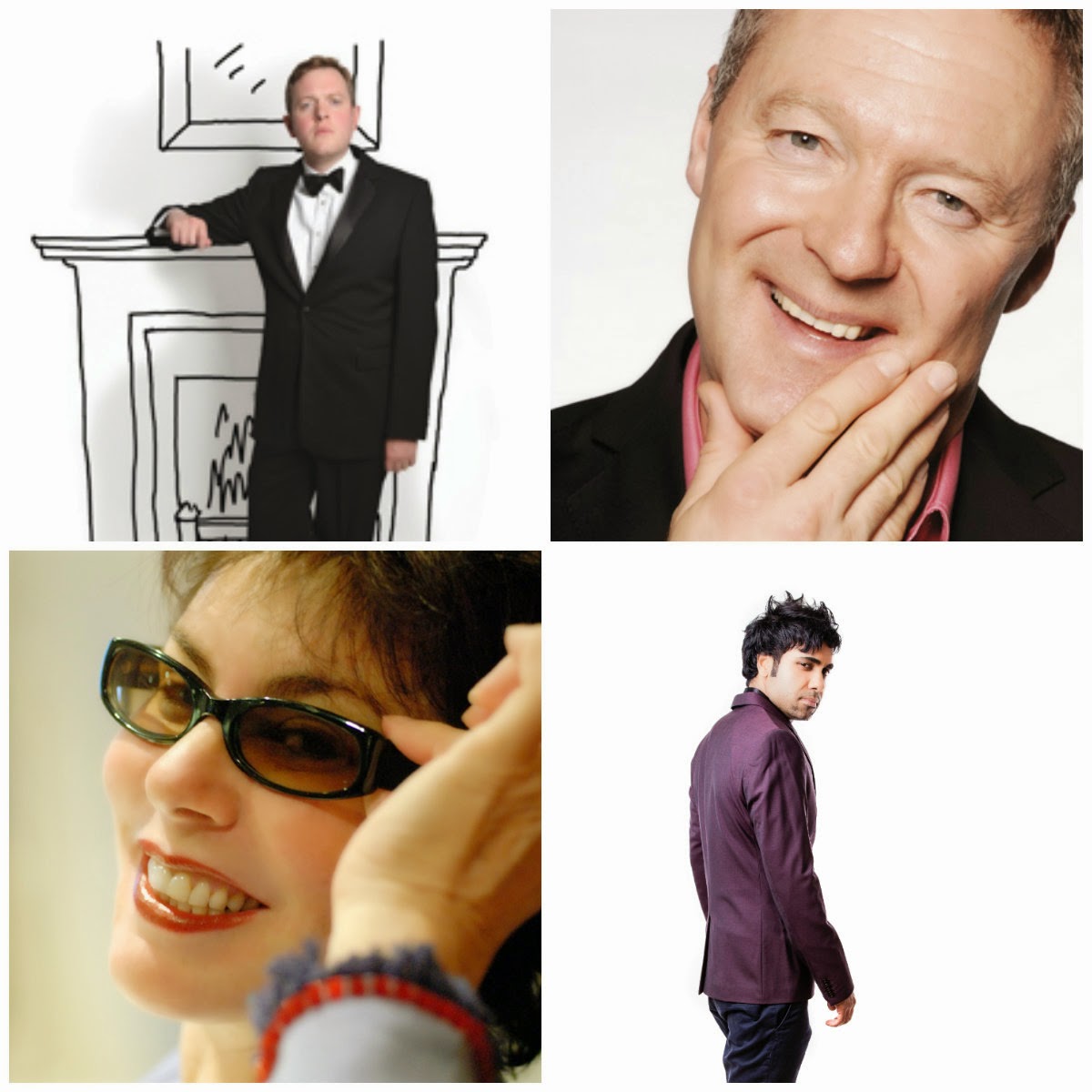 We welcomed some great acts appearing at the Glasgow International Comedy Festival to the Citizens Theatre including Rory Bremner, Miles Jupp, Simon Evans, Ruby Wax, James Campbell and Paul Chowdhry. We've got two whole weeks of the UK's top comics in 2015, check out our website for the full list.

The weird and wonderful Beautiful Cosmos of Ivor Cutler was brought to life by Vanishing Point and National Theatre of Scotland with an uncanny central performance by Sandy Grierson as the man himself. The production was nominated in the Best Musical Production at the UK Theatre Awards and won Best Music and Sound at the CATS Awards. The show also made Mark Fisher's Top 10 Theatre of 2014 list and had us singing songs about cups of tea by the staff kettle.


Things got racy in May when the life of John Wilmot, Second Earl of Rochester and 16th-century punk was brought to the stage in a play by Stephen Jeffreys directed by Dominic Hill. The Earl popped up around town asking Glaswegians if they were up for it. They certainly were... 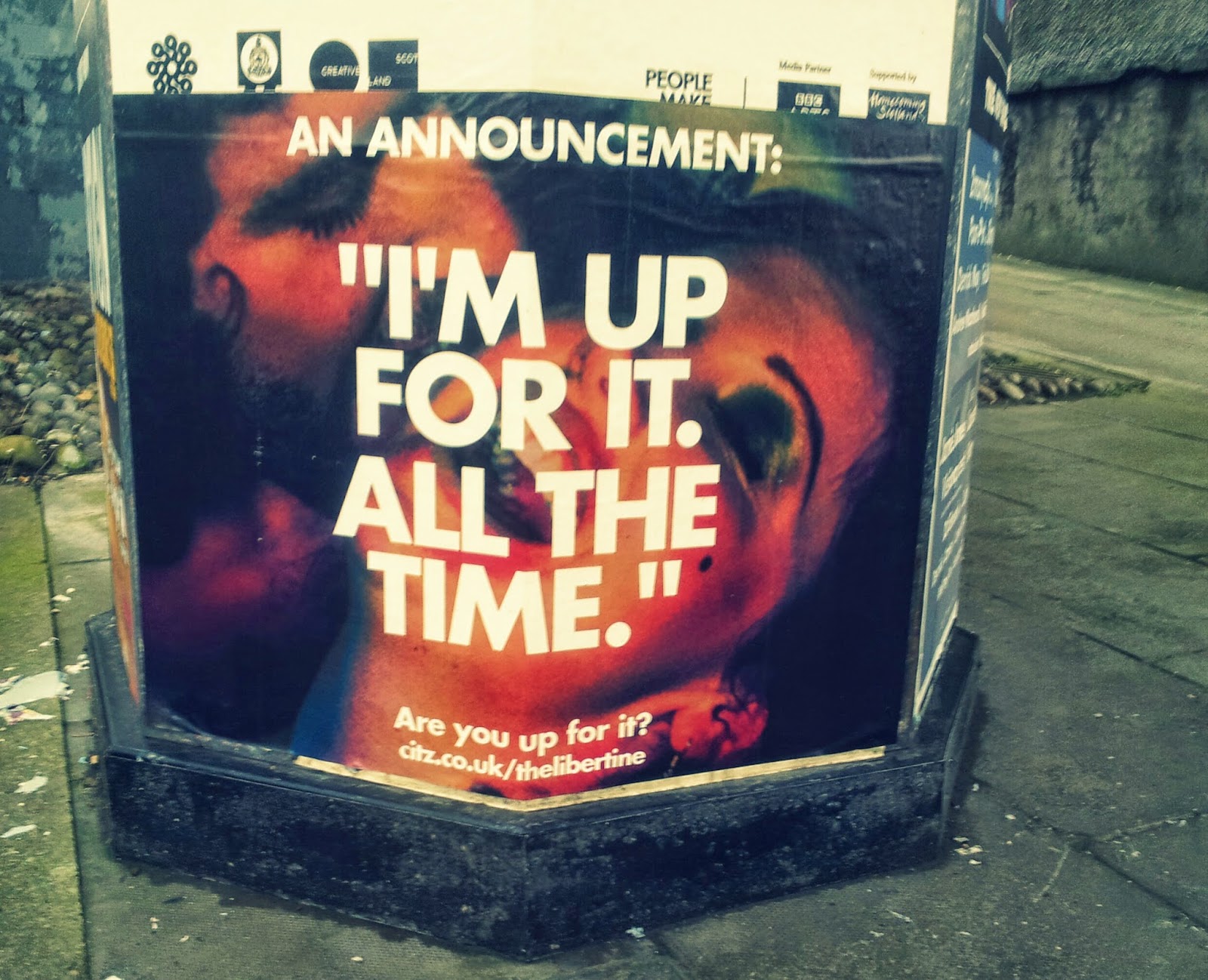 An Announcement: It's Friday, and the Earl has a little treat for you. Are you #UpForIt? http://t.co/bSDqFXTD5K pic.twitter.com/80YLCAc5DJ
— Citizens Theatre (@citizenstheatre) April 4, 2014


An announcement: The Libertine @citizenstheatre? EVERYONE should be up for it, as soon as humanly possible.
— Caitlin MacColl (@turningtoaverse) May 7, 2014


The Libertine is brilliant. In 20 yrs time we will be talking about this period in the history of @citizenstheatre & calling it a golden age
— Louise Welsh (@louisewelsh00) May 18, 2014

As Glasgow limbered up for the Glasgow 2014 Commonwealth Games, the highs and lows of the school Sports Day were played out on stage in a new show by a host of Scottish writers and musicians and performed by a cast of Glaswegians from all sections of the community. Davey Anderson, Peter Arnott, Lynda Radley, Alan McHugh, Linda McLean, Ian Pattison, Gary McNair, Johnny McKnight, Julia Taudevin, Liam Harkins, Nalini Chetty, John Kielty and Douglas Maxwell all contributed stories to the show.

Our Festival 2014 event On Common Ground was our most ambitious project to date, involving 150 volunteers, performers, singers and musicians, a group of First Nation storytellers from Manitoulin Island, Canada, a nightly parade through the Gorbals and  over 1,500 audience members from across the city and the Commonwealth who enjoyed the free event telling the history of our neighbourhood and city and of the common bonds that we all share.

There were a huge amount of photographs, films and stories created around the project, and you can read more about the project on the On Common Ground website. In October, On Common Ground was awarded The Glasgow Life Award from Arts & Business Scotland, made to the most creative contribution realising the ambition of Festival 2014.

After a busy summer, we were straight back on the main stage in August with Headlong's smash hit production of 1984, transferring to the Citizens direct from London's West End. Tickets went flying out the door, with audiences declaring the show double plus good.


It's like a man violently throwing slabs of raw, meat at your face, then applauding the theatricality of it all. In a good way. #1984play
— nice boy idiot. (@fairlyhappyjack) September 3, 2014


Headlong are regular visitors to the Citizens Theatre, and will be back in March with The Absence of War, a funny stinging political drama examining Labour’s recent history and the politics of style over substance.


Shakespeare's Hamlet has provided the Citizens with some of its most memorable productions during its history, and our new production directed by Dominic Hill and starring Brian Ferguson as the troubled Dane more than lived up to that tradition. Citizens veterans Roberta Taylor and Peter Guinness returned to the Gorbals as Gertrude and Claudius, with Dominic working with regular collaborators designer Tom Piper and composer Nikola Kodjabashia.

"...by any measure, a world-class production." Sunday Herald

"...thrilling and fascinating" The Scotsman ★★★★

The National Theatre of Scotland marched onto the stage in October bringing their revival of Joe Corrie's 1926 play In Time O' Strife. The gutsy folk-punk songs and the story of a Fife mining community buckling under the strain of a seven month lockout got the Red Flag flying on Clydeside.


DC Jackson's new play Kill Johnny Glendenning produced with The Royal Lyceum Theatre, Edinburgh had audiences rolling in the aisles. With laughter, not due to any stray bullets you understand, though there were plenty of those going spare too. Jackson's sweary shooty story of Glasgow's criminal underworld also had a killer soundtrack featuring the mighty Aswad.


Great night and plenty laughs #citizenstheatre #killjohnnyglendenning
A photo posted by @pault7 on Oct 10, 2014 at 3:50am PDT

White Stag Theatre Company brought a double bill of Gaelic theatre to our Circle Studio with a Gaelic version of Burns' epic Tam O' Shanter and the legend of the serial-killer Mac an t-Sronaich.

Our pals at Untitled Projects revived their 2006 play Slope, which tells the story of the 19th century poets Paul Verlaine and Arthur Rimbaud.

In a new twist for 2014, every performance in our Circle Studio was broadcast live on Kiltr, with the actors directed as much for the impressive camera setup as the audience in front of them.


Audience reactions to SLOPE: Eve Nicol from KILTR on Vimeo.

We were very sad to hear shortly after Slope that Untitled Projects announced in The Herald that they wouldn't be making any more work together for the foreseeable future.

Mull Theatre sailed the SS Cabinet Minister up the Clyde to present Whisky Galore  based on Compton Mackenzie’s popular novel of a community of plucky Scottish islanders.

Santa's workshop was re-located to our Circle Studio as Eric the Elf (Harry Ward) welcomed 3 - 6 year olds to the North Pole to help him save Christmas. Unfortunately, it's Eric's first day and his lack of experience is causing him difficulties so it's a good job that there have been so many honorary elves ready to lend a hand. Andy McGregor's very sweet show was a perfect alternative for those a bit too wee for our main stage Christmas show.


" a lovingly-created treat to cherish and remember" The Herald ★★★★★

Our year has ended on a high with tickets for our Christmas show A Christmas Carol going faster than second helpings of Mrs Cratchit's Christmas pudding. Cliff Burnett returned to play the role of Scrooge following his appearance in Hamlet earlier in the year. Dominic Hill's distinctive style was translated to this family show that's had audiences and critics leaving the theatre full of festive cheer.

"The darkest feelgood show in town" The Herald ★★★★★

Christmas Carol @citizenstheatre reminds me why Ive been back every year for 25 years thank you & Merry Christmas! pic.twitter.com/Y6l6jTqyZz
— Fiona Dorman (@feshine) December 24, 2014


Thank you to everyone who has joined us this year, whether as an audience member, performer, volunteer, participant or staff. It's been an historic year for Glasgow and Scotland and we're very proud to have been a part of it.

We hope you join us for our 70th anniversary season in 2015. As well as the shows already announced for the spring, we've a few more treats lined up that we're looking forward to sharing with you later in the year.

Happy New Year from everyone at the Citizens Theatre!