Well, folks, it is now Monday morning, and much has happened since last I checked in at the Betrayal Blog. We played our first preview performance on Friday evening and……the audience response seemed very positive indeed-good news! Many moments of silent tension were indeed met with “you could hear a pin drop” hush, and other moments were greeted with much laughter, which is a relief to all involved. The audience seemed to be with the play all the way, and the appreciation at the curtain call was a lovely thing to be on the receiving end of. 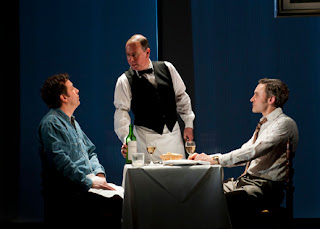 We met on Saturday afternoon for notes on the previous evening, and worked through a few little adjustments/ideas/thoughts/concerns on the stage, before the 2nd preview performance that evening. However, before that happened, we had to gather at 6.30pm for our pre-rehearsal, and now pre-performance ritual that is “Keepie-Uppie” (physical warm-up!), and vocal warm up round the piano with Dominic. The excitement and concentration in the room was palpable as we smashed our previous Keepie Uppie record of 117 with an extraordinary….wait for it…..*drum roll*……284!!!!!!!!!! Good times. 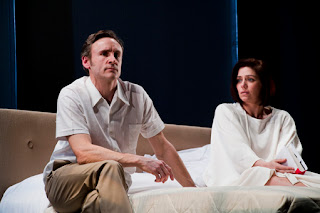 The 2nd preview was then performed before a lovely, warm and sizeable audience, who showed their appreciation at the end of the evening with whoops and cheers mixed in with their loud applause - a lovely way to end the week, and to go into a well deserved day off for all concerned.

So here we are, at the start of the week, and we shall meet at 3pm for notes, and then another dress run at 4pm to keep the show like a well oiled machine as we work towards Press Night tomorrow. I of course, have succumbed to the pesky cold that seems to be doing the rounds at the moment, so my chief aim is to keep that to myself, as I fear I would be rather unpopular if I passed it on to Cal, Neve and/or Hywel. 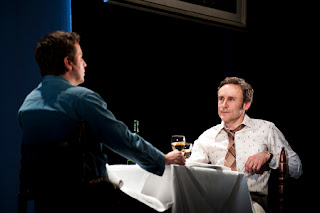 So, dear reader, until I next tap out another posting to you, I would ask that you send lovely, warm, positive theatrical vibes in the general direction of the Gorbals, and I would also ask a personal favour-namely that you send me antiseptic, non-coughy/sniffy/sneezy vibes to dressing room 7 - that would be hugely appreciated, and not just by me I’m sure…thanking you in anticipation……

Finally, here's a short video of audience reactions to the show after Saturday's preview. Thanks to everyone who came to speak to us!