So, it’s Wednesday afternoon, the day after Press Night, and I think I can say without fear of contradiction, that it all seemed to go really rather well!  A very positive response from an enthusiastic audience, both in the auditorium and in the bar after the curtain came down, so a few post show sherries were taken by cast, crew, production team and audience too - lovely! A few of us even made it over the river for a final nightcap, just to make sure we slept well… 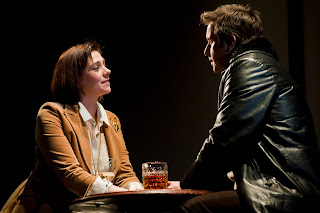 But the Betrayal team don’t rest on their laurels and take it easy on themselves, oh no. Today at 2pm, we assembled onstage to rehearse Fraser in to the show- he is taking over ASM duties from Emma, who will be taking over DSM duties from Cathy when she goes into King Lear rehearsals on Monday. It’s a non-stop theatrical carousel here at the Citz, I tell you!

[Ed. Knowing some of the intricacies of the stage management backstage, we send lots of luck and best wishes to Fraser!] 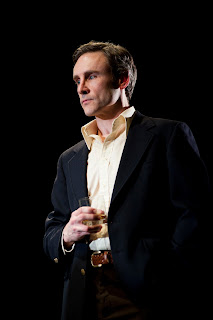 And now the next stage of the run comes into play, namely performing it nightly and keeping it alive, fresh, vital and true - a task we are all relishing, I’m sure. This will start before every performance with the statutory game of Keepie-Uppie, and of course the vocal warm up, which I will now be leading. Dominic has passed this job on to me, as he will now be spending all his time and efforts getting into King Lear mode. Obviously, I’m rather nervous of this, but Dominic assures me I’m up to the task! Oh, and while I’m on the subject of warm ups, vocal and physical, I’m delighted to report that last night, pre show, we once again smashed our previous Keepie-Uppie record with an extraordinary 307 - GET IN!!!

So dear reader, I will take my leave of you, and take this opportunity between blizzards and hailstorms to go and grab some sustenance, but fear not, I will return soon to the Blogosphere, and share more Betrayal goodness with you….and Keepie Uppie scores too, obviously!

Ed. Review from The Stage: http://bit.ly/yeeIXY


"Distressing, caustic and superbly realised, this Betrayal is a menacing celebration of The Citizen’s new direction."