An edited version of this interview was originally published in The Herald on 20 April 2010. We're chuffed to have the full article for you:

It’s Grand National weekend in Liverpool, and Friday is Ladies Day. With a party atmosphere already in full swing, this event gives the city’s populace of wannabe WAGS license to don their most extravagant frocks before proceeding to drink themselves silly and behave in a very un-lady-like manner. As this very Scouse form of mardi-gras grows ever messier, most of the participants will be unaware of the presence of an equally well turned out but altogether more refined grand dame who blew into town the night before. Outside of a shared sartorial elegance, however, it’s unlikely that Amanda Wingfield, the brittle matriarch of Tennessee Williams’ 1944 play, The Glass Menagerie, would approve. Neither, one suspects, would Amanda approve of the appearance of Imogen Stubbs, the actress who plays her in Polly Teale’s production, in the hotel lobby the next morning. 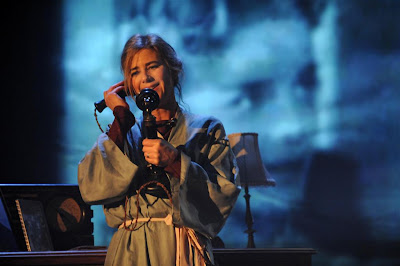 Rather than dress up to the nines and come on all high maintenance, Stubbs goes against the Ladies Day grain by sporting Andy Pandy style striped dungarees and a messy mane of just-out-the-shower blonde hair. The image is as far away from Amanda as you can imagine. On the other hand, Stubbs adds a fresh girlish dimension to a production which has already ripped up the rule book of how The Glass Menagerie should be done.

Teale’s co-production between Shared Experience and Salisbury Playhouse, which arrives at Glasgow’s Citizens Theatre next week, features the use of film projections and an archly mannered dance routine to accentuate the play’s conscious sentimentalism. In what is regarded as Williams’ most autobiographical play, Tom, the play’s narrator, is first seen seated at a typewriter while sporting a smoking jacket, pushing the dialogue along in his mannered drawl like a more foppish Prospero conjuring things into life. Stubbs herself presents Amanda as a younger, more vivacious and less grotesque a study than is usual, more akin to a desperate housewife on the verge than the pop-eyed southern belle she’s usually played as. 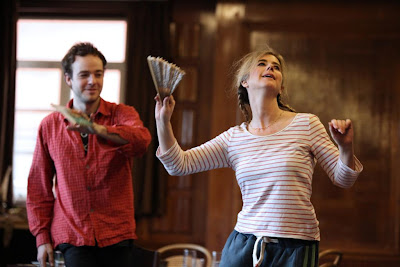 “It would be easy to play Amanda as this ludicrous figure,” Stubbs says, “and while it’s easy to laugh at some of her excesses, there’s something heroic about her as well. She uses desperation, anger, blackmail, everything. But you don’t want to play her like a one-trick pony, or a drag queen. There has to be something else there as well.”

Stubbs was born in Northumberland, grew up in Portsmouth and studied at Oxford. It was here she stumbled into acting via the Oxford Revue, who, under the directorship of future Private Eye editor Ian Hislop, brought shows to Edinburgh. Later Stubbs played Irina in a production of Three Sisters at Oxford Playhouse. She then went on to RADA, making her professional debut as Sally Bowles in Cabaret.

Stubbs looked younger than she was, and at the Royal Shakespeare Company played a stream of teenage ingénues, including Desdemona in Othello. That production was directed by then RSC boss Trevor Nunn, who became Stubbs’ husband. Nunn’s subsequent knighthood makes Stubbs an official Lady, although no airs and graces are in evidence. In 2008, Nunn directed Stubbs in Ingmar Bergman’s Scenes From A Marriage at Coventry’s Belgrade Theatre, now run by former Dundee Rep director Hamish Glen. Keeping things in the family, Stubbs played opposite Iain Glen, a contemporary at RADA. 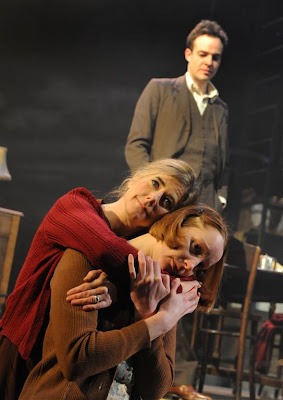 Another RADA classmate was Jane Horrocks, who cut her teeth playing a role-call of kooks just as Stubbs was being cast in a succession of girly roles. Both, it seems, would’ve happily swapped how they were being seen.

“I always saw myself as a character actress,’ she says, “and I would have killed to play the sort of things Jane Horrocks was getting. When I was much younger I looked identical to the little girl in The Sound of Music, and it was a curse, because I wanted to be Jodie Foster or Tatum O’Neil. But you can’t help how people see you.”

Stubbs shouldn’t underestimate herself, however. A measure of how different a role Amanda is to how Stubbs is perceived can be illustrated by two incidents. A couple of days previously to our meeting, Stubbs came out of the Playhouse stage door after that night’s performance of The Glass Menagerie with Emma Lowndes, who plays her onstage daughter Laura. An autograph hunter approached Lowndes, who, after duly obliging, suggested they might also want Stubbs’ signature. The stage-door fan looked blankly at Stubbs, then asked her if she’d actually been in the show. It was even worse in Watford, when two audience members lodged separate complaints to the theatre management on the grounds that they’d come to see Stubbs, who they said hadn’t appeared. In actual fact, Stubbs was in every performance. “That’s just what I like,” Stubbs says of such anonymity, before launching into a riff on the state of modern television. “On telly you’re cast as your obvious self, but acting is about seeming, not being. The writer in me gets very frustrated by some telly. Not that there isn’t good writing going on, but the way everything these days is geared towards ratings. Who decided there was no place for the single drama when there’s so many cookery programmes? Writers like Jack Rosenthal were completely sidelined by television. He couldn’t get arrested, because he wasn’t considered hip or sexy, but Jack Rosenthal and people like him made the telly what it was.”

Rosenthal is pretty close to Stubbs’ heart, as the writer of such works as Barmitzvah Boy and Ready When You Are Mr McGill mentored her when she was branching out as a writer. Stubbs’ play, We Happy Few, about an all-female theatrical troupe who toured Britain during the Second World War, was a moderate success. Even with such a feelgood premise, however, she feels it’s unlikely to end up on the small screen.

“There’s this notion that television has to be aimed at youth,” she says, “when watching telly at eight o’clock at night is the last thing young people will be doing. Why should writers like Jack Rosenthal or Alan Bleasdale have been put into the wilderness, when they were the people who gave the BBC its reputation? When I started out, it was directors who cast their actors. Now it seems telly’s largely been put into the hands of businessmen. But people are hungry for culture. Not everyone can go to the theatre, or has the courage to, but you can expose them to it by stealth, by showing quality drama, or adaptations of classic plays. Instead all they get are more cookery programmes.”

Stubbs is the first to admit some of her own choices for television have veered on the frothy side, and indeed she even took part in Masterchef once upon a time. On stage, however, you feel she’s up for anything. 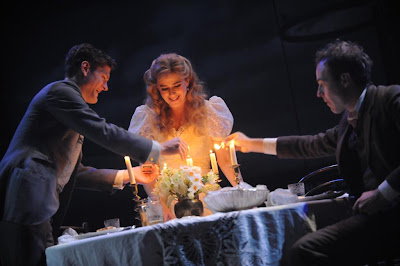 “I’d like to do A Doll’s House,” she confesses. “I’d like to do Medea, all those parts. But the way I’m thought of, I can’t be tall and dark and mysterious like Janet McTeer or someone. I can only be five foot five and tomboyish or whatever.”

Following We Happy Few, Stubbs also expresses a desire to write some more, and already has another play in the bag, which may or may not see the light of day. As for acting, despite her success, her approach is refreshingly unaffected.

“It’s fun,” she says, “but I’ve never seen it as anything other than a lovely job. I think it’s dangerous if you start taking it too seriously, and if I hadn’t started acting I’d loved to have written books. I’d like to have been a director’s assistant or a co-director. I think I’d have liked to have been a sound editor. I love sound, but at the time I was at school I didn’t know jobs like that existed. I love the whole putting together of things. I’ve got so many ideas. There are too many things I want to do.”