Some more press reactions to Backbeat.

“Scenes charting the lads' transitions from upturned-denim youth to black-leathered experience are bridged by fast and furious sets in seedy clubs where hard days' nights hone their rock'n'roll skills. The fresh-faced actor-musicians are touching as embryonic incarnations of the legends.”
The Observer 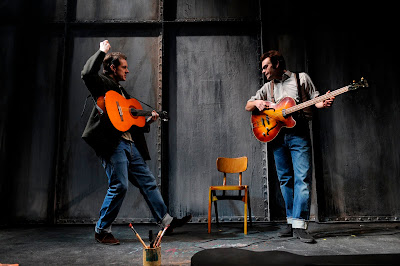 “Andrew Knott (stepping into the not inconsiderable shoes of Ian Hart, who plays Lennon in the film) encapsulates the contradictions of a young working-class man, whose swaggering machismo sits uncomfortably beside a near obsession with Sutcliffe. At once cocky and insecure, Knott is the very image of the talented teenager emerging painfully into adulthood.”
Sunday Herald

“A big part of its success is the kinetic thrill of watching a live band belting out early rock’n’roll classics like Twist and Shout, Johnny B. Goode and Roll Over Beethoven on stage. But the artful direction and excellent cast – notably The History Boys’ Andrew Knott as a sharp-tongued but hopelessly insecure Lennon, and Alex Robertson as the talented tormented Sutcliffe – play a big part.”
News of the World

“Writer-Director Iain Softley’s stage adaptation of his 1994 film…is even better than the original…It’s powerful emotional drama and it feels made for this kind of setting. We can’t recommend it highly enough.”
News of the World

Stephen said…
This production has just come to my attention. I'm a little concerned that Iain Softley has been given full credit for the original Backbeat when in fact he was a co-writer. I was one of the other writers. I would want this remedied if the production is taken further.

Blogger said…
BlueHost is the best web-hosting provider for any hosting plans you require.
4 July 2018 at 01:08