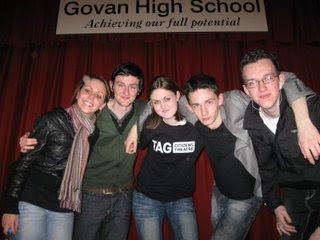 This week sees Young Co. tour around Glasgow schools for the first time, with a fantastic new play by Davey Anderson. Blackout, which Young Co. premiered earlier in the summer (at the Royal National Theatre) is a hard-hitting true story about a 15-year-old boy called James who wakes up one day in a jail cell and discovers that he's getting charged with attempted murder.

Young Co. are taking Blackout into 9 schools this week for a performance and discussion. Members of Young Co. from the cast along with Davey Anderson have been blogging about their experiences.

You can read the entries in full on the TAG blog.