The PR team (students from Caledonian University) who have been working on “Wicked Christmas 2” met up with writer Peter Arnott and director Neil Packham to get some inside information on how the production is shaping up. We talk to Neil and Peter about what went into making Wicked Christmas 2 and what makes the Community Company so special... 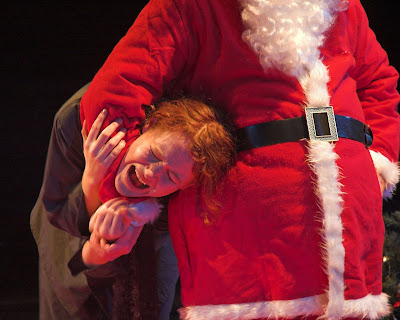 Peter: There is only 1 professional theatre in Scotland which has a continued group of actors like the community group has. The Community Co. are performing for the 8th,9th, 10th time together which is unusual for community theatre, it's usually a one-off. The Citizens’ position in this particular part of Glasgow is that it’s very important to the building to connect very closely to the people in this area…the Community Co. does this very well. It’s different from working with professional actors because the production becomes much more about them, and it's much more about their presence on that stage - and it enriches the whole experience. Especially when it’s in their community, it’s their presence in the community. It is very much about individual presence, there is a richness of character. Part of the point of community theatre is that you remain yourself, and you become the story teller. A community theatre can talk about all the same things as a professional company can talk about but will do it in their own unique way and that’s what’s very exciting about it as a viewer.

Neil: There is a lot of different personalities, we have a great laugh but we are all working towards the one thing. Everyone has their own commitments but you can’t let people down. I think that’s one of the very positive things, is that you have to work very closely as a team, that’s good community, we don’t preach it, it just happens. It’s a great laugh, you feel like you’re just in there and you just have to get on with it, there is no complacency, you need quite a lot of energy because you are dealing with so many people it's so exciting and it's such a thrill.

And how did they come up with the concept for “Wicked Christmas”?

Peter: Well it’s all the Company’s own ideas. I met up with the Company and started talking about Christmas stories that meant something, one of the things about “Wicked Christmas 1” is it was completely black and cynical…this one isn’t just cynical, it's about what actually matters. We began talking about “It’s a Wonderful Life” and movies like that. There has always been a deliberate strategy in a gentle way of pushing things further every time, which has also been true of them as performers and of them as writers. There are about 9 different writers in this and they have all written really interesting stuff, it’s a kind of slice of the human race in George Square on Christmas Eve…some of it's funny, some of it's obscene, and some of it's sad, all human life is there, and that for me is what Christmas is. It’s a kind of celebration of humanity rather than whatever kind of religious meaning it had for others, what it definitely is, is a celebration of our humanity in all of its variety and this kind of project really lends itself to that because it does have all different kinds of people and all their different perspectives. And you just bring them all together, and that’s what this is, it’s a collective writing and I am excited about it, it’s a good script.

And what’s next for the Community Company?

Peter: I have an ambition – I think we now have a very solid basis of people who can write something for a main stage and be performed professionally. I think what i'd like to do is a full length play with 4 or 5 of them writing it. The next stage for a number of them is to really put something together for the main stage, the talent is there. And again to devise a structure where we can give each writer 5 scenes and their own characters and giving them their individual space to write and come up with their own stuff. Then put all this together, like a soap opera only much, much better.

Neil: It’s a brilliant opportunity for them to be on the main stage in front of a paying audience. A wonderful experience, I’d like that experience! I have trained as an actor and I have never performed on the main stage, it’s a privilege. Yeah I am sometimes quite envious of their position to be able to do this.

And finally, they give us a real feel for the show…

Neil: It’s a cathartic experience because you walk around Braehead and I see the people fighting each other, families falling out, and that’s what happens, because it encourages people to be greedy, and that’s wrong, that’s not what the spirit of Christmas should be. I hope people might come along to Wicked Christmas having spent their day in town and they have spent too much money, they have got too many shopping bags they arrive in the theatre, it's been pouring with rain they know they should be happy about it they really want to laugh at themselves, and they are kind of quite angry at what they have just done because everyone does it! I can't believe I have just done that hopefully they can come in and see that and it can be a little reflection on themselves and they can go yeah that was me out there on the street going why am I now in debt so much in order to make people happy that I love so much, when they won't like it anyway, let's just have a bit of a laugh and have a nice dinner. That’s the kind of people who should come.