We are starting a regular Behind the Scenes feature were we will get to know some of the staff who work at the Citizens' Theatre. There are a vast number of greatly varied jobs in theatre. We hope you'll enjoy finding out more about them...

Key Responsibilities: Cutting patterns for costumes to be made “in-house”, fitting them and organising their manufacture.

How long have you worked at the Citizens? Almost 7 and a half years.

Did you have to train specifically to do your job? I did Fashion and Art at A Level and a HND in Theatre Wardrobe at Mabel Fletcher College in Liverpool. 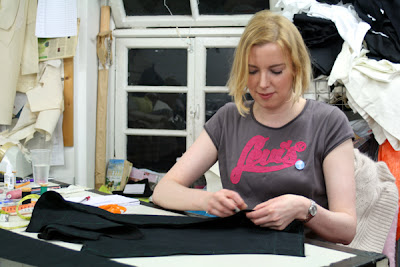 What’s your favourite thing about your job? Cutting “pukka” period costumes (doesn’t happen very often!) and drinking Lin’s tea. Lin has worked at the Citz as a costume maker for 8 years. That’s approx 14,400 cups of tea she has made.

What’s your least favourite thing about your job? Linn getting the huff and refusing to make tea! Putting in invisible zips, working with nasty, difficult fabrics and doing fittings with demanding actors/designers. Luckily most actors and designers are pleasant to work with.

My hero is… It was Grace Darling and William Boothe when I was a nipper, but really anyone who sticks their neck out to change things for the better.

You probably don’t know this about me, but… I like Brussel Sprouts and think Herbert Lom is sexy. (Ed. I totally agree)

My first ever album was… I’d like to say something by Velvet Underground or Black Sabbath, but it was Showaddywaddy – Greatest Hits 76/78. I didn’t fancy Dave Bartram though.

My desert island luxury would be… a samovar

I wish I could… Speak another language fluently and dance the tango (not necessarily at the same time).
Labels: Behind the Scenes