WAC Ensemble's latest project is a horror radio play Cupid, Draw Back your Bow. This terrifying tale about a camping trip in Scotland that goes hellishly wrong will be available to listen to from 22 October.

Ahead of the premiere, cast member Genna Allan told us more about becoming the villain in this new radio play.

“People are not born heroes or villains; they’re created by the people around them” - Chris Colfer

When the idea came around for Cupid Draw Back Your Bow, I knew I wanted to be the villain of the story. Back in 2020 I was due to play Nurse Grice/Nurse Nisbett in Liz Lochead’s, Dracula. Unfortunately, due to Covid-19, Dracula was cancelled and I was unable to make my villain debut. When exploring the script of Dracula I found an interest in playing the baddie as in all honesty, I found the villain to have more of a character story. So when the opportunity came about to create my own villainous character, I jumped at the chance.

I think what’s important to note about Lucie is she is portrayed as a villain in the play, but in actual fact she is still a young 15 year old girl. I think if she was treated differently throughout the entirety of the camping trip, she wouldn’t have wandered off in the first place and therefore never would have become the villain.

When I began devising Lucie, I started by choosing simple things like name and age. I decided to make Lucie young as you don’t often get a female villain, and if you do they are usually older. I thought it would be important to keep Lucie young to show you how much of a journey she can have at such a young age. I chose the name Lucie as I thought it resembles Lucifer. A tough name makes a tough character, right?! 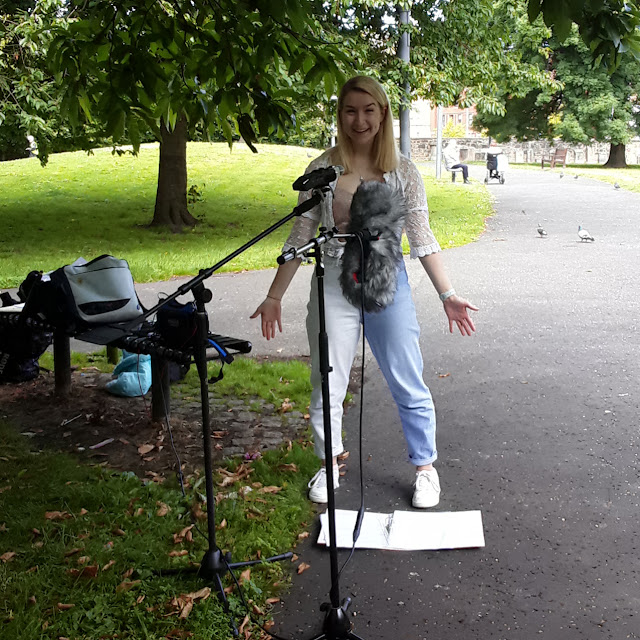 Becoming Lucie in a park filled with weans was tough! When recording outside on the first day it was tricky to navigate as I felt very conscious of having to shout really vile things while kids ran around playing on the grass beside us. Imagine having to shout things like “Stay away from me” or “Toughen up Riddyan” in a park… it definitely got some looks! After the initial fear was over with, it became really fun becoming Lucie in a place where her character would feel at home. Not necessarily with a Microphone in her face, but just being in a park/ wooded area, surrounded with nature felt like a natural place for Lucie to be. Even though that probably was the first ever camping trip she’s had in her life.

The real fun happened when we had our first full group recording as I then had the joy of bouncing off of other character’s emotions. Having the opportunity to rehearse before recording gave me the opportunity to work on Lucie and see how she would react to these other characters in real life. You could sense the fear others had when around Lucie, that made her thrive. Lucie as a character doesn’t have a bad bone in her body, but given the situation she had no control over herself. I think that’s what made them scared, they didn’t know what she would do next. There was no predictability in Lucie’s actions. 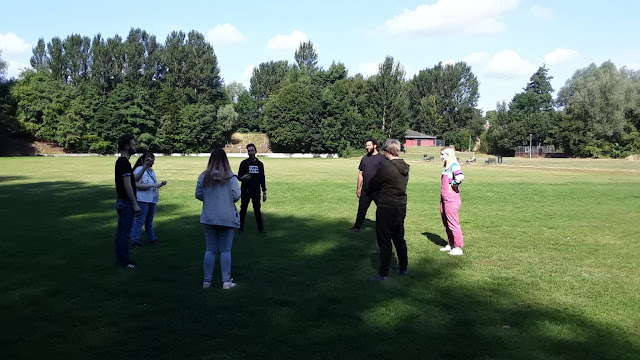 I think that Lucie is a misunderstood character. I believe that if she dealt with her family issues instead of submerging them under a bridge, she more than likely would be a totally different person. Lucie has a lot of anger; she has a lot to say and not a lot of chances to speak. Her act of setting the pigs free was simply a cry for help. She’s lost in herself, and she would do anything to just feel something inside. This trip was a breaking point for Lucie and although she is portrayed as your villain, she is not a bad person, she is simply misunderstood.

Lucie was an incredibly fun character to play. I loved every second from creating her to recording her. I can’t wait to hear the finished result. The cast and the creative team have been brilliant, and I hope we get to create another project like this in the future.

Cupid, Draw Back your Bow will be available to listen to from 22 October find out more about this project and our WAC Ensemble, a theatre company for care-experienced young adults.