How lighting was used in The Macbeths: Q&A with Stuart Jenkins

Using a radically cut version of Shakespeare's text, The Macbeths charts the breakdown of the ambitious couple's relationship following an act of murder which at first binds them together and then destroys them. Originally performed live in our intimate Circle Studio, this intense adaptation was later turned into a film for online audiences.

Alongside the film, we have created a series of educational resources to support Drama students. In this Q&A we talk to Lighting Designer Stuart Jenkins about how lighting was used to tell this story and the differences in lighting for stage or screen. 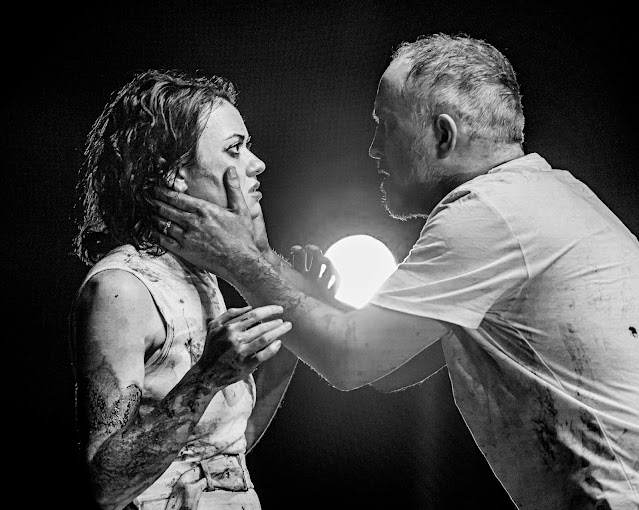 How was lighting used in the original stage production to create the atmosphere of the world of the Macbeths? Why were some of these choices made?

Originally, Dominic (Hill, Director) was was thinking about doing the show under working lights, which does work, but I felt would lose some of the intensity and focus of the piece, so I designed a very simple basic rig where most of the show was lit buy 2 large (2kw) Fresnel type lamps run no more than 40% at any time with a very dark colour filter (Lee 127 smoky pink) in them. As the lamps go from 0 to 100% the lower intensities give off a warmer yellow/orange glow to the lamps, so the intention was to get a murky dirty look in combination with the colour filter.

At one point in our discussions Dominic said that he felt the characters were in hell and, as it says in the play, hell is murky. I also used a ‘fluorescent’ strip (actually an LED strip made to look like a fluorescent fitting) and an LED PAR lamp as a top light directly above the bed. We would start quite general with the fresnels and the ‘fluorescent’ and as we progressed to the end, we would get tighter into the bed as their world closed in on them, until there was only a very low, dull top light left.

The intention was also to only focus ​the lamps to the bed. When the actors were on the bed, they were directly lit by the lighting units, if they moved off the bed they’d move into the shadows more, relying on ​light bounced from the bed rather than direct light. This was more for the fresnels than the fluorescent, as the florry is very much non directional and throws light in all directions. The top light was very tight and really only focused to the centre of the bed, again not worrying if the actors were directly in or out of light. We also used a lot of haze which helps to add to the murkiness of it all.

How was lighting used in this filmed version of the story? What choices were made and why?

The lighting was used quite differently in the film. There were certain elements that were kept from the original production, namely the positions of the fresnels and the fluorescents relative to the bed. But instead of working for an in-the-round audience like the Circle studio, you are only working on what the cameras see. We also had real trouble using haze during the filming, as Covid restrictions meant we had to circulate the air in the venue much more than normal, so couldn’t keep haze in the air for any length of time.

The side Pars and profile lamps that can sometimes be seen in shot perform the dual role of lighting the actors and giving a background to some of the shots. We would spend a bit of time working out what the DOP (Director of Photography) and Director wanted to see in the back of shot, and whether it was too bright for the cameras or needed a focus tweak to make the lights work for the camera.

In the past I’d been used to throwing as much light ​as possible at a subject for cameras but was surprised at the low levels we were working at and positioning moving lights to give some bounce rather than directly lighting onto the actors. Lots of high contrast, lit from behind gave a very dark brooding feel to the piece. Shooting for black and white meant we didn’t have to worry about colour, so angles became what we played with. By this I mean the position of the lighting unit relative to what it lights. Low cross or floor lighting looks very different to top or standard ’45 degree to the vertical’ lighting.

The two examples below help illustrate this idea about position of lighting. They (mostly) use a single source of light. I love the Caravaggio painting, The Denial of Saint Peter, which uses a candle as the primary source of light. Also, the  shots from the film The Third Man, which uses big key light and no fill.

How did lighting help support the overall visual language and style of the piece?

In meetings before filming, Martyn (Robertson, Co-Director) had spoken of Cinema Verité, shooting in black and white using handheld cameras. It was all kept quite tightly shot, so it ended up being tight focus (for cameras) high contrast, lit from low sides or from the floor crossing, or directly above to try to change angle as much as possible between shots. I’d also on occasion only use one ​lighting unit so the actors would throw their own shadow onto each other or only be in half light, trying to keep some murk or dirt in it.

In his interview, Dominic talks about lighting being used to 'frame the picture' and create a more 'sculptural' and 'painterly' effect.  Why do you think this effect was important for telling this story and portraying these characters and how was it achieved?

There was no attempt to make it theatre -like in the lighting. Though the idea that if the actors walked out of light, we didn’t follow them remained.  We didn’t need to see them perfectly lit front on, but made it dark and murky, to try as much as possible to reflect what the characters were planning and eventually doing. The Third Man and Caravaggio's paintings were inspirations, high contrast again. It is quite literally dark and shadowy.

Tell us why back lighting was used so much in the film and what impact it was designed to have.

It performs a couple of functions. In theatre, back light is used to highlight the top of the head and shoulders to make a person stand out from their background, stops it looking quite so two dimensional. It did the same thing on film, the actors didn’t blend into the background quite so readily. Because the cameras were constantly moving, the overall composition of any individual shot was up to Martyn and the DOP, Julian (Schwanitz), sometimes we’d only see Keith Fleming and Charlene Boyd in back light with the only face light being bounced from the bed, or a covering moving light bounced from the floor nearby. The low cross pars and profiles you can see in the background were useful as a backing, we never ran them at any great level as they’d bleach out the cameras, but they gave a depth to some shots and a bit of power if you needed it.

Frequently lighting in the film highlights faces, lips, eyes, lashes, spit, sweat etc.  Why was it important to draw attention to these features in the telling of this story?

Yeah, again you can thank Martyn and Julian for that, it was shot so tightly that you couldn’t help but see these things. At the start it’s very intimate, quite sexual. I guess it portrays the descent into madness, their mounting desperation as time moves on, the way it’s shot and cut has almost a voyeuristic quality to it.

Can you tell us about any other key moments where lighting played a key role in focusing the audience's attention on an image or moment?  How did you use lighting to do that, and why was that moment so significant?

What the audience focus on was really down to shot selection from Martyn, Dominic and Julian. There was the briefest of moments when Keith is listening on headphones and was ¾ backlit by a line of pars focused just upstage of the bed. When filming it, this was a very striking image, it added height which we hadn’t had before, and it was one of the few times we got the haze to work! I think there was a moment of it on the final edit.

What was possible with lighting in this film version which wasn't possible on stage - and vice versa?

The colour, obviously, and also the variable haze due to Covid restrictions. The haze would have added a smoky feel to it. Apart from that, I’d made the rig much larger than it was in the stage versions to cover as many eventualities as possible as the filming schedule was so tight, so we rigged seconds or alternates to the more heavily used kit, so we didn’t have any down time changing lamps.

Several times we see the actual theatre lights in the background, which reminded me that we were watching a theatrical event in that space.  Why do you think it was important to make the audience aware of this?

It wasn’t a conscious attempt to make us feel that way, though I suppose the voyeuristic nature of the way it was shot would have made it look that way. I did have a slight thought about the lamps being a representation of looking in on the Macbeths, could’ve been us, or the other people in the play? But I was more looking at giving a backing to the camera and a descent angle to light from rather than a more artistic reason.

Is there anything else you want to tell us about choices you made in lighting the Macbeths?

It’s almost as if the two shows are two separate beasts as they are so different from each other. They have some similarities but mostly, lighting for camera is a different role to lighting for an audience. I relied very much on the skills and experience of Martyn and Julian and hoped it would look okay in the edit, as I wasn’t involved in any of that bit.

Want to find out more about the creative process behind The Macbeths? Our filmed interviews with the cast and director provide more insights. Watch them here.

The full film of The Macbeths is available to access as an educational resource until 3 June 2022. Find out more.