In his most recent blog, our Head of Production, Graham Sutherland gives us a behind the scenes look at work happening on the foundations of the auditorium. The Victorian jewel at the centre of the building will remain largely the same retaining its unique features - but longstanding problems with the foundations, flooring, ventilation and access are addressed as part of the Redevelopment project.

As well as working on the foundations outside the building, there has also been a lot of activity inside the auditorium and under the stage.

In the main auditorium, works are required to create a new removable band pit; level access from the front door of the building to the auditorium; increase the seating capacity; and to improve heating and ventilation.

The heating and ventilation in the old auditorium left a lot to be desired. Ventilation was previously provided by an historic old system that made so much noise it was impossible to use it under show conditions. Heating was provided by a smattering of radiators around the walls of the venue that distributed the heat unevenly to the audience.

We frequently had people on the verge of passing out with the heat in the upper levels in the height of summer, or having to wear their coats, hats and scarves if they sat on the front row in the middle of winter.

The age of much of the mechanical and electrical system meant it needed constant repair and attention. It was also incredibly inefficient from an environmental sustainability perspective. This meant that we had to completely overhaul the heating and ventilation systems.

Our strategy is to create what is known as a plenum under each level of the auditorium. This is a large void under each seating area that can be supplied with fresh air that comes out through hundreds of small grills in the floor and behind seats. This ensures that we deliver air at the right temperature across all levels and areas of the auditorium. Hot air can then be extracted at the ceiling above each tier.

These plenums will be supplied by a new air handling system.

As part of an audit that was carried out in light of Covid-19 the capacity of the specification of the air handling was upgraded even further. When we reopen, the main auditorium will be provided with a healthy supply of 100% fresh air; all the more important for a building that will be operating in a post-Covid world.

At the front of the auditorium, we are creating an area of removable floor with a band-pit. This requires excavating and a new foundation laid. We have never had this facility before at the Citizens Theatre and previously bands or musicians at the front of the stage have badly obscured the view of the audience and required seats to be removed to facilitate them. No longer will any children have their view blocked by a glockenspiel player at a Christmas show! (one particular memory).

We are significantly lowering the entrances to the auditorium at the back of the stalls so that the floor slopes up to the back of the seats instead of down (as it did previously). This is what allows us to level out the foyer and get rid of the ramps and stairs that made access more of a challenge.

These changes in level also allow us to create two new boxes with flat level floors, that better serve wheelchair users in particular, on either side of a new central control room. These are new options in addition to our previous wheelchair positions in the stalls. There will also be new wheelchair positions at dress circle level.

Building Work In The Auditorium

The original plan for the central area of the auditorium was to lift the floor, scrape out the loose material, and pour a thin layer of concrete screed around the existing structure to seal the void. 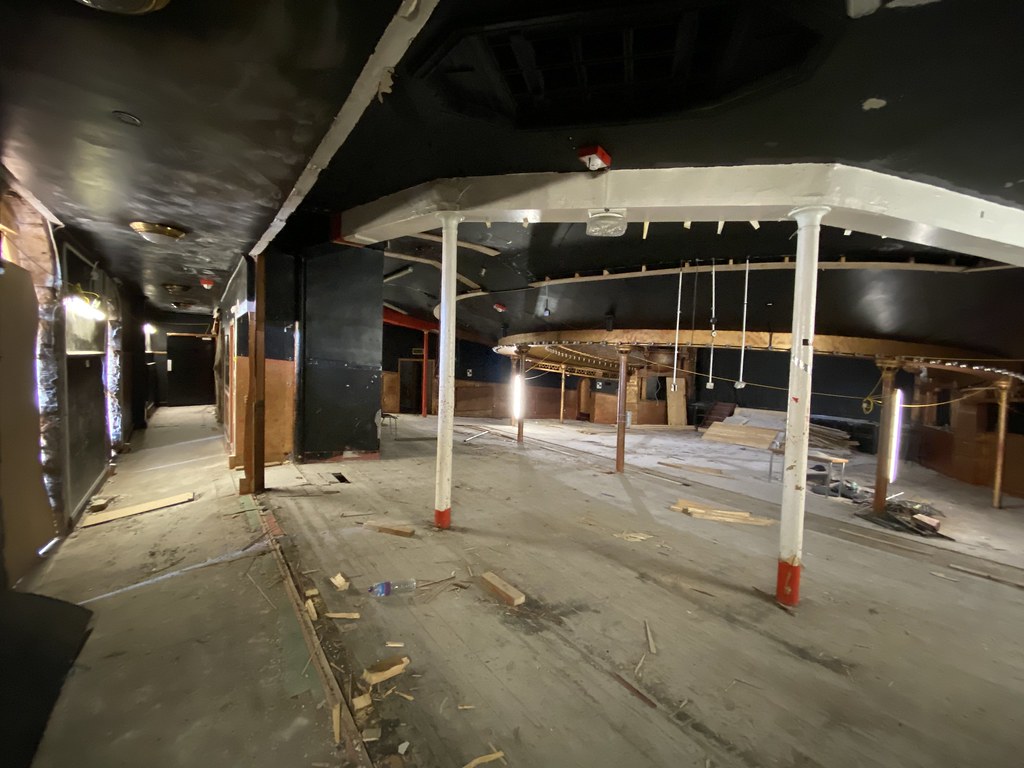 We finished removing the old control boxes and began to lift the floor to get access to the void space underneath.

The joists were in much worse condition than previously anticipated. They were badly warped, had problems with shakes, the spacing was a bit too far apart, and what was holding them up was less than adequate. Some were on wonky wooden posts sitting on a block of sandstone and balanced on bits of half brick. There was also evidence of woodworm and rot. (It’s no wonder the floor used to be so squeaky!)There were huge amounts of debris under the floor that needed taken out and the ground level was a lot higher than anticipated in some places meaning more excavation was required to form the plenum space. With the timber structure not fit for purpose and the excavation now requiring mechanical diggers, we were left with little choice but to take everything out and start from scratch.

Having cleared the space, machines were brought it to excavate the band pit and create the void required for the ventilation plenum under the seating area.

All three levels had been poured to form the band-pit, the air plenum, and the access and control room areas at the back of the auditorium. The concrete was then polished and sealed, ready for the new floors to be built back up on top of a good solid set of foundations.

Visit our Flickr Album to see more images of the auditorium foundations being completed.

The next step will be to install the ventilation system and timber floors. Hopefully it won’t be too long before we have it carpeted, the seats reinstalled, and audiences back in.

There has also been fantastic progress assembling the steel frame for the new build elements of the project, and also on major alterations backstage and understage which I will cover in more blog posts soon.

Alex Skivington said…
I’m trying to understand the concept of the stalls seating sloping upwards towards the stage. Will that not cause a problem with seeing the rear of the stage ?
10 April 2021 at 18:56