In conversation with Frances Poet

The Macbeths is an intimate and stripped back version of Shakespeare's epic tale. Director, Dominic Hill worked with writer, dramaturg and Citizens Theatre Literary Associate Frances Poet to create a version of the famous play that uses only the dialogue between the Macbeths but allows the full story to be told. 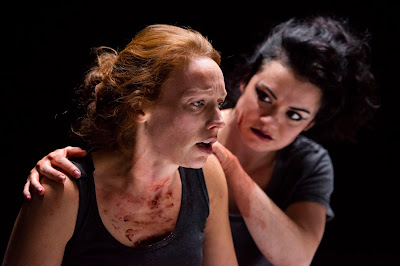 What does the role of Dramaturg involve?

That’s a tricky question. I’ve been to conferences dedicated to answering exactly that. It’s a very clearly defined role in Germany but in Britain it’s a bit vaguer and more amorphous. As far as I’m concerned it means somebody who is obsessed with text making themselves as useful as they can be to the director, writer (if they're alive) and actors either in the development of the project or in the rehearsal room or, ideally, both. In this case, it consisted of me assisting Dominic to realise his brainchild of distilling the story of Macbeth into a two-handed drama.

Can you tell us a bit about The Macbeths?

The Macbeths is a much truncated version of Shakespeare’s Macbeth told through the characters of Macbeth and Lady Macbeth. The production shows the couple in their private sphere and takes place on and around their marital bed. In carving out their stories alone, the production is able to offer a focussed and nuanced interpretation of this famous couple. It makes for an intense and powerful evening which allows an audience to relish the Shakespearean language while also rediscovering the drama anew.

This version of the text only uses the dialogue between the central couple. What were the challenges of that?

In the first third of Shakespeare’s play, at least, the interactions between Macbeth and his wife carry the spine of the narrative and all the most riveting drama so it was easy to pare back everything else and let their dialogues stand alone.  As the two characters begin to pull away from each other in the wake of their terrible deed, however, they interact less and we had to take more liberties in our adaptation. We found various means of bringing in outside voices to tell the story. Having the couple practice their reaction to Macduff finding Duncan’s dead body, for example, helped to create a sense of how that scene would play out offstage.  Another key one was using Macbeth’s surveillance equipment and reel-to-reel recordings as a means to receive news from the outside world. In the main though our focus was much less on the outside world, focussing instead upon the couple and their markedly different reactions to the bloody deed they are complicit in. And while some speeches have been moved or borrowed with lines reallocated, generally we’ve treated the text with a lot of reverence.

What did you enjoy most about adapting this famous play?

Working closely with Dominic Hill and diving feet first into Shakespeare’s exquisite language was an unadulterated joy. As was being able to tussle with and find answers for those huge questions about this famous couple, the nature of their relationship and whether or not they had children.  And the resulting piece is such a showcase for the tremendous talents of the actors, it has been exhilarating to watch. There is nowhere to hide in this piece. Neither leaves the stage. It’s just them in this beast of a play, speaking some of the most heart-achingly powerful lines ever written.

How do you think an all-female cast might impact on the show?

The enfuriating answer is that it changes everything and nothing. They are still the same couple who together embark on a bloody course of action that destroys them both. And in some ways, it feels like the only real impact of this choice is to allow an audience to see the genuinely extraordinary Lucianne McEvoy bring her clarity and ferocity to the part. On the other hand, the casting does yield new resonances both linguistically and thematically. There’s a greater sense of understanding between the couple somehow, and their disparate responses to their deed feels to me to be accentuated. Instead of soldier and Lady coping differently with the bloody act of murder,  we have two women who start at the same place trying to negotiate their own hellish remorse in different ways.

This October, the Citizens is taking this powerfully concentrated production on tour. Visit citz.co.uk/the-macbeths for full details.

Which Kilt is Best for you? said…
At Liberty Kilts>https://libertykilts.com/liberty-kilts-kilt/kilts-for-men/leather-kilt, we offer a large variety of kilts outside of standard tartan kilts. We also offer utility kilts that feature just as much functionality and storage as they offer style, as well as hybrid kilts that combine the best of both worlds between tartan and utility kilts. Leather and denim kilts are also available for those who want to express their personalities through kilt-wearing in a different way and for those who want more options when it comes to where and when you can wear these kilts. Besides our passionate beliefs about kilt-wearing and manufacturing, we believe that owning a proper Liberty Kilts is crucial. Every proud Scot deserves a kilt they will feel proud of wearing whether you are sporting a full kilt dress or are just going out on the town for a day. With our policy surrounding hand making each kilt, we create high-quality kilts that feel great and look even better. We strive to create kilts that will not only satisfy the expectations you have for them but kilts that will exceed them as well.
23 December 2020 at 11:02