Assistant Director George Nichols continues his blog from the rehearsal room of Long Day's Journey Into Night. This week he explains the importance of storytelling : 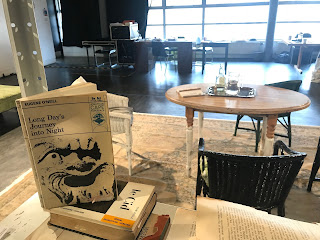 It sounds obvious that when staging a play a big part of what you are doing is storytelling. But as anyone who has read a bedtime story to a child will have experienced, it is about more than just reading the words in front of you out loud.

So, how do we tell the story of a play? What tools do we have at our disposal?

One tool is the world we set the story in. Is it set in a completely naturalistic environment, or does it also include elements that are aesthetically poetic and metaphorical? Or is it symbolic? For example, if you were to do a production of Long Day’s Journey Into Night where all of the furniture was made of whiskey crates it would immediately bring alcohol to the fore. On the other hand, Tom Piper’s design for our production strips away the family’s privacy, which has its own effect on the story we are trying to tell.

Another tool is characterisation. When Laurence Olivier played James Tyrone in 1971 people commented on his how thick the Irish part of his Irish American accent was. This may have made James’s impoverished immigrant background more consistently present and set him apart from his sons; illuminating that facet of the story. Another example would be that in our production we’ve talked a lot about James Tyrone’s history as an actor, which in turn will have its own affect on the the story we share with you. 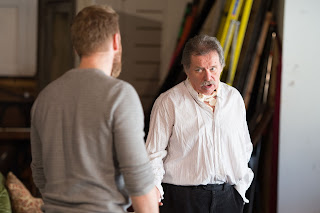 The staging itself is also a tool. As an assistant director one of the messages most impressed on me by the directors I have worked with is to make every moment on stage tell a little story that unlocks a new part of the text to the audience. An example of this from this week’s rehearsals is a moment when Edmund falls to the table in a fit of coughing and knocks over the whiskey bottle. As Jamie sees his brother coughing and the whiskey bottle rolling toward the edge of the table, does he go to help Edmund or does save the whiskey? I won’t give away our choice but this moment, played in two different ways, can tell two different stories.

Of course with a play like Long Day’s Journey Into Night your pneumatic drill (to extend the already tenuous tool box metaphor) is the text. Sometimes one of the hardest things to do is give the audience important information needed for the understanding of the play whilst keeping the action dramatic and engaging. An example this week was when we went back through the first act and reached a conversation between George and Jamie. In this exchange we learn a lot and it sets up much of the action of the rest of the play. For example we hear a bit about Edmund’s illness, about Jamie’s lifestyle, James’ relationship with money and hints about Mary’s morphine addiction. Eugene O'Neill's masterly writing means we are drip fed this information in a way that piques our interest and creates suspense. But rehearsing this can be difficult when you already know the plot so you have to constantly put yourself in your audience’s shoes. It’s great watching Dominic doing this sort of work, as by feeding little notes to the cast about what we learn when, and how they’re using this information to affect each other he manages not only to make the story clear, but charge it in a way that makes it more than just an exchange of facts. 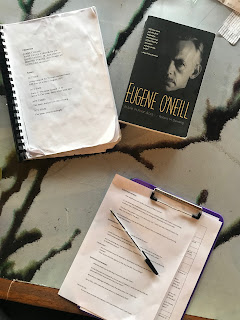 The word ‘vision’ is a bit of a taboo phrase in relation to theatre directing, because it implies that a director might be forcing the story they want to tell on to a text that is doing something completely different. In actuality, storytelling is about working with the text and making lots of small, informed decisions that impact the world, characterisation and action of the play as truthfully and faithfully as possible. We are very much looking forward to sharing this story with you.