Skip to main content
Labels
Posted by Citizens Theatre May 16, 2017

A season of power, violence and revenge at the Citizens Theatre this autumn!

“At the Citizens, we believe that plays and stories originally created in the past have the power to shed light on our lives and society, and that great literature can speak to us over the centuries. In particular, the theatre has always been effective at dissecting the violent aftermath of tyranny and the abuse of power.


I’m delighted to be bringing back Zinnie Harris’ reworking of Aeschylus’ Oresteia, which will also be presented at the 2017 Edinburgh International Festival. Acclaimed at its premiere last year, this is an epic theatre event which takes its audience on a wild, disturbing but always gripping journey that ultimately leads to forgiveness and reconciliation.

Faithful Ruslan: The Story of a Guard Dog is an extraordinary satire on Stalinist Russia seen through the eyes of a guard dog.  An international creative team will work to deliver a unique, visceral and very funny show. It’s very much a modern ‘Animal Farm’ for the world of Trump, May and Putin.

Where Faithful Ruslan and Oresteia engage with the world today indirectly but forcefully, Anders Lustgarten’s 2015 Lampedusa will bring us right up to date. The play connects an Italian former fisherman who now collects the dead bodies of washed-up migrants to a Chinese-British student in Leeds who is forced to work for debt collectors. Lustgarten’s play, receiving its Scottish premiere at the Citizens, is deeply engaging and relevant, and is a moving celebration of humanity.

My first show in the Citizens’ Circle Studio, The Macbeths, adapted from Shakespeare’s play, will focus on the relationship of the killer couple and its disintegration following an act of murder which at first binds them together and then destroys them.

We’ll welcome two touring companies to the Citizens this season: our friends at National Theatre of Scotland with two new groundbreaking productions, Adam and Eve, both timely and theatrical explorations of the complexities and challenges facing trans people today and Actors Touring Company for the first time with their production Living with the Lights On.

And as Brexit and recent events once again bring back to mind past troubles in Northern Ireland, we thought it was a perfect time to revive Bold Girls. Originally written for 7:84 in the 1990s, it launched the career of leading Scottish playwright Rona Munro.”

“Oresteia: This Restless House perfectly encapsulates Dominic’s tenure so far as Artistic Director at the Citizens Theatre and it’s perfect that we’ll be taking the work to the Edinburgh International Festival as we mark his fifth year as artistic leader of the Citizens. I am delighted to see the return of Trainspotting, a show that appealed to people from all walks of life when we presented it last year, and I’m pleased that it will extend its reach to audiences in Edinburgh this year. The Citizens Theatre is committed to engaging with as inclusive a range of people as possible in the creative life of the theatre and breaking down barriers to engagement with the arts. I am personally very pleased to welcome back the National Theatre of Scotland with work by and for the trans community and Actors Touring Company for the first time with their production, Living with the Lights On, which speaks openly and honestly about living with mental health difficulties.” 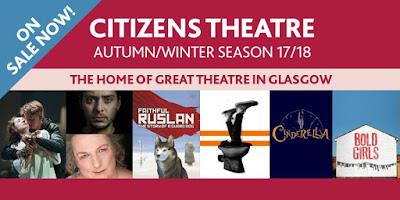 The Autumn 2017 season will include: