We're in the final days of being in the rehearsal room for Trainspotting. In just a few day's time we'll be packing up our things and move into the auditorium for next week's technical rehearsals.

The last 3 weeks of hard work are starting to come together as we piece the play into a whole and start doing full runs. Today it’s all systems go with every member of the team pitching in ideas! 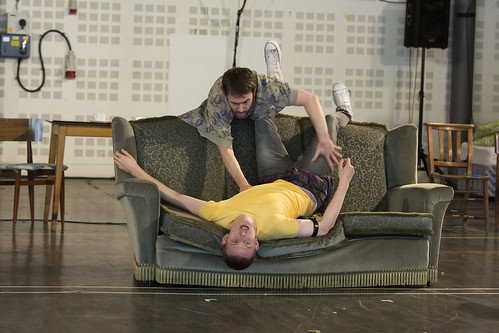 We begin the day with our favourite game, 4 square- a simple, yet highly competitive ball game that always charges us up for the day ahead and has us laughing and squabbling like siblings!

Next, we start work on the scene "House Arrest". It is a demanding scene, physically and psychologically, that morphs between theatrical styles. It shifts between the domestic, the absurd and the terrifying. The scene also demands a huge amount from Lorn, who plays the principal character, Mark Renton. Despite this, it has been one of the most enjoyable scenes to work on- a true ensemble piece, with every actor involved in its creation and execution. All of us laughing all the way! 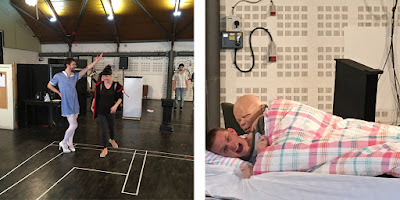 MJ- our sound designer is busy working on some brilliantly textured and nuanced sound effects. It’s intriguing to experience the text layered and punctuated by sound and music- it adds a refreshing dimension to the storytelling.

Our movement director, EJ works her magic on the scene, using movement choreography and dance to heighten the scene’s sensuality and visualise the physical experience of drug addiction. It’s fascinating to see how a simple physical activity can be magnified and abstracted into beautiful, organic movement.

Our wonderful director Gareth is creating and managing all of this with a calm, measured eye, making sure that everyone is included and heard. Under Gareth’s direction, the creative process has been highly inclusive and collaborative, which has made it a joy to work on. 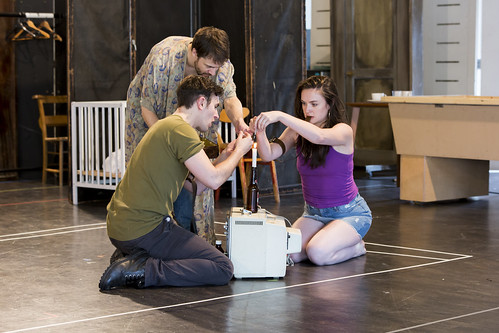 Each day the world of the play becomes a little more fleshed out as a new prop, costume garment or piece of furniture is integrated into rehearsals. Slowly but surely the story is become a living, breathing entity. Costume changes are an integral part: There are multiple characters and only a cast of five to play them all. Gareth has ensured that these changes and transitions are done inventively and are woven into fabric of the production- instead of being a functional activity, they become part of the storytelling. 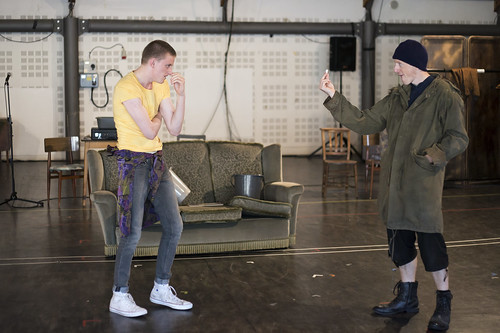 It is a privilege to work on Trainspotting. It’s a joyride of a play- equal parts hilarious, thrilling and always irreverent and provocative. The richness of the text and Gareth’s lead in guiding us through it has made the last few weeks brilliantly stimulating. Our magnificent cast - endlessly energetic and imaginative- are taking  this much-loved story to new and thrilling heights. Bring on the technical rehearsals!

George & Sheelagh said…
I'm a 69 year old guy in Vancouver Canada who has acted for over 50 years. I so wish that I could be there to see this show. Your blog made my pulse race as I visualized the details of the rehearsal process that you described. Thanks for this little peek into the world behind.
16 September 2016 at 20:38