Endgame runs at the Citizens Theatre from 4 - 20 February and will tour to HOME, Manchester. Our Endgame stars Chris Gascoyne and David Neilson have wanted to perform Endgame for some time.

They've been taking time out of an intense rehearsal schedule to share their thoughts about Endgame, Beckett and performing on the Citizens' stage. 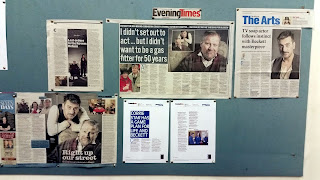 “It asks questions, but doesn’t give answers – and that’s what I love about it. It makes us wonder about these games we play with each other, the filling in of time before we go. And that’s so true.
“Hamm says in one line; ‘I was never there.’ And what he means is we all worry about careers, and getting the best house prices, or whatever, but we don’t seem to really experience life.”  David Neilson in Evening Times

"We shouldn’t underestimate people. Beckett is for everybody. He isn’t middle-class, highbrow theatre. He’s just not." Chris Gascoyne in The Guardian

"It was, for me, as good as it gets. This audience I wanted to play to" David Neilson talks to Sunday Mail about his experience as an audience member at the Citizens.

“At the moment I'm like a little boy looking up at his teacher to see if he's done alright,” Gascoyne says of working with Hill, “and when he says yes, I feel like I've got a medal or an award.” Chris Gascoyne in The Herald talking about working with Citizens Artistic Director Dominic Hill.

We grabbed Chris and David for a coffee and asked them to fill us in on what Endgame means to them:

Meanwhile, our staff have been busy preparing the stage for this work, and we're all looking forward to welcoming everyone back for the start of our Spring 2016 season.