Now we are 70 - Looking back at our anniversary year

In 2015 we celebrated 70 years in our Gorbals home with plays that put Glasgow front and centre. We look back on a year of great theatre - what was your favourite? 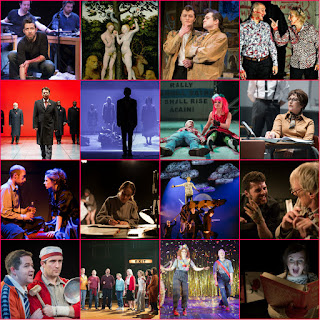 JANUARY
We welcomed back the innovative Filter who started their UK tour of their radical version of Macbeth here at the Citizens. Who knew that Banquo's ghost couldn't resist a dinner party of Wotsits, Coca Cola and a high-stakes Blind Man's Buff?

Meanwhile our Circle Studio was one of the last places standing in John and Zinnie's Harris chamber opera The Garden set in a dystopian world.


FEBRUARY
Audiences in Glasgow and Edinburgh welcomed back John Byrne's beloved Slab Boys with open arms in 2015. Those cheeky scamps were whipped into shape both on and off stage by David Hayman, who directed as well as performed the role of the boys' gaffer.

Our Valentine's press night saw the staff kitted out in their finest 50s gear and some very special guests in attendance.

"David Hayman rolls back the clock with an impressive revival of John Byrne’s Scots classic, The Slab Boys" The Big Issue ★★★★★


We're still trying to get the last of the paint off the Circle Studio after David Leddy's Fire Exit gave us a crash course in how not to get ahead in the murky world of art forgery in Long Live the Little Knife.

APRIL
Our friends Headlong (who return in Spring 2016 as co-producers on Observe the Sons of Ulster Marching Towards the Somme) brought David Hare's dramatisation of the Labour Party's failed 1992 election campaign which saw some eerie parallels with the political landscape in 2015.  The post-show discussion held just a few weeks before the General Election was a heated event! Playwright David Hare's Guardian article about his play sparked almost as much debate.

We hosted Dead Centre's Lippy a haunting play inspired by the real life tragedy of four women from County Kildare who chose to take their own lives in mysterious circumstances.


Lippy was presented as part of The Arches' Behaviour Festival. Very sadly, The Arches was forced to close in June following a controversial ruling from the city's licensing authorities.

We gave the premiere performance of Douglas Maxwell's Fever Dream: Southside and finally got an answer to the question: Where's Terry?

Set in the streets around Queen's Park, Douglas' funny and surreal was an affectionate but raw depiction of a part of Glasgow that has challenges and triumphs

MAY
As well as celebrating our 70 years in the Gorbals, there was also a far more painful 70th anniversary in 2015, when we marked the end of World War 2. Gitta Sereny's Into That Darkness is a collection of interviews with SS-Obersturmführer Franz Stangl who oversaw the deaths of nearly 1 million people in Nazi extermination camps.

Our Mainstage Director in Residence Gareth Nicholls made his debut at the Citizens with a searing production, which was adapted for the stage by Robert David Macdonald. Macdonald was one of the three artistic leaders under whose leadership the Citizens became known around the world for contemporary tellings of classic texts.

"...superbly acted drama is a meticulous, compelling triumph." ★★★★★ The Guardian

AUGUST
We were busy over the summer months preparing for our most ambitious project to date: a stage adaptation of Alasdair Gray's iconic 20th-century classic, Lanark. Lanark: A Life in Three Acts was written by David Greig and directed by Graham Eatough whose collaboration first began with experimental theatre company Suspect Culture.

One of the most hotly-anticipated events at the 2015 Edinburgh International Festival, the eyes of the world were on the Citizens Theatre. It was met with rave reviews with audiences and critics, and audiences flocked to see the show when it returned home to Glasgow in September.

On 11 September 1945, the Citizens Theatre Company gave its first performance at the former Royal Princess's Theatre at 119 Gorbals Street.

We marked the occasion with an evening welcoming back old friends to the Citizens, and a documentary charting 6 months in the life of our theatre as well as some of our history broadcast on BBC Scotland and BBC Four. You can watch clips from the broadcast, including interviews with Pierce Brosnan and Mark Rylance on the BBC's Arts website

Lots of people got in touch to tell us about their memories of the theatre and the times that they've spent here, and we loved reading them all and hearing everyone's stories.


OCTOBER
Vox Motus and National Theatre of Scotland brought back the beautiful and stylish Dragon, having premiered the work at the Citizens in 2013. Since then, the production has travelled to China, won a UK Theatre Award for Best Play for Children and Young People, has been exhibited at the V & A and was invited to be be part of the 2015 Edinburgh International Festival.
We also celebrated the legacy of the notorious Close Theatre Club which has established 50 years ago with a season of three productions which honoured. Gareth Nicholls was joined by Vanishing Point Artistic Director Matt Lenton and Debbie Hannan to direct the works in our Up Close season in our Circle Studio.
Our third world premiere production in 2015 was a brand new musical for Scotland, created as a co-production with Ambassador Theatre Group. The Choir was written by Paul Higgins, with songs by Deacon Blue frontman Ricky Ross and told of a disparate group of people brought together to sing in a community choir, not always willingly, in Wishaw.

The corridors, offices and workshops of the Citizens rang with Ricky's hummable tunes that got everybody singing, and audiences loved this feel good night out.

@citizenstheatre just home from #thechoir fantastic show would love to see it again but looks like it's sold out😢cast where amazing👏🏻👏🏻👏🏻👏🏻
— Julie Gibson (@jools_G40) November 11, 2015


DECEMBER
We closed our anniversary year with two shows for families: the wild and anarchic Rapunzel burst onto our main stage while 3 - 6 year olds and their families were treated to an adventure to the North Pole in Flora's Fairy Challenge.

Thank you to everyone who has seen one of our shows, got in touch with their memories of the theatre, taken part in one of our classes, or worked with our Learning team.
Our Spring 2016 season is already on sale, including Beckett's Endgame and This Restless House, a new adaptation of the ancient Greek tragedy The Orestia.
See you in 2016!
Labels: Citizens Theatre David Greig David Hare Edinburgh International Festival Graham Eatough Headlong Theatre lanark Macbeth Theatre Zinnie Harris

Blogger said…
Which is better Pepsi or Coke?
PARTICIPATE IN THE POLL and you could get a prepaid VISA gift card!
8 September 2017 at 01:21