WE ARE ONLY PUTTING WORDS IN THEIR MOUTHS. 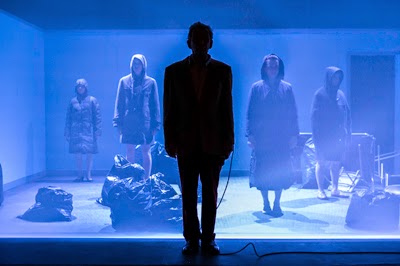 Lippy is inspired by the mysterious events surrounding the deaths of four Irish women in County Kildare in 2000, apparently as the result of an act of self-annihilation. The three sisters and their elderly aunt were found locked in their home having starved to death. The lack of documentation or evidence of the days leading up to the last time the women were seen has left their deaths open to speculation.

So strange are the circumstances surrounding the tragedy, Lippy isn't a dramatisation of the events leading up to the women's deaths, as the founders of Dead Centre told the New York Times :

Lippy made waves at the Edinburgh Festival Fringe in 2014 during its run at the Traverse Theatre. Premiering at the Dublin Fringe Festival in 2013, Lippy has also been performed at the new writing festival Neue-Stücke aus Europa festival in Weisbaden, Germany, and in New York. The play has been touring the UK prior to its run at the Citizens Theatre, picking up awards and plaudits wherever it's gone, being awarded Best Production, Irish Times Theatre Awards 2013 and Fringe First, Herald Angel and Total Theatre Awards for its run at the Edinburgh Fringe Festival in 2014.

"This strange, visceral play isn’t an explanation of their mystery, more a monument to it." Time Out