“It’s very important to me that the audience should be able to engage with the production regardless of their knowledge of theatre or “the classics”. There are so many families going through situations like this – the play, of course, takes it to a tragic extreme…”

Taken from an interview by Al Senter, critically acclaimed writer and director Mike Bartlett  gives his thoughts on a modern day Medea. 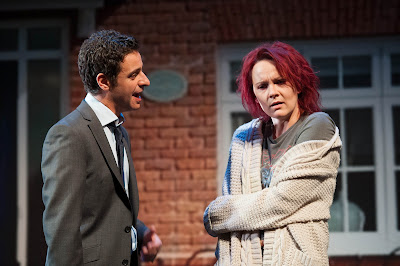 With such ground-breaking plays as Earthquakes in London, Love Love Love and 13 under his belt Mike Bartlett is the boldest of today’s emerging generation of playwrights. Fresh from the filming The Town, his first work for television screened by ITV later this year, Mike has adapted the Greek classic Medea, but a Medea that promises to be unlike any other production of the play we have seen.

This Medea has travelled thousands of miles from its original location in Ancient Greece and fetched up on a British housing estate which Bartlett describes as "not dissimilar from the one where I grew up". Since much of Bartlett's recent work has been set in a dystopian near future, it seems something of a departure for him to turn to Classical Greece for inspiration.

Mike: Whenever I'd seen productions of the Greek classics, I'd admire the acting and the design but I'd always felt a disconnect between me and the plays. It was as if I had no access to them. So I wondered if it might be possible for me to take one of the plays and to make today's audience connect to it in the way that the Athenian public would have done, two and a half thousand years ago."

It could not have been an easy task to remove Medea, a play so integrated into the culture of its time, and to locate it convincingly in the everyday present of shopping malls and social media?

Mike: By setting it in the kind of environment which I know well, I suppose that I have put my own experience into the stuff of the piece and I think of it as less a version of Euripides than more of a new play of my own. At the same time, the beats and the rhythms of the play come straight from the original.

Regrettably, newspaper headlines are often tragically occupied by accounts of family tragedies akin to the situation played out in Medea, when parents, faced with the breakdown of a marriage or a relationship, take a terrible revenge on their former partners.

Medea's actions, however horrific, have a grandeur that seems at odds with the domesticity of your chosen location?

Mike: Sometimes people we think we know well will do something that is wholly unpredictable. It is therefore much more likely that a figure such as Medea, very lonely and completely isolated, will behave in the way she does. She is a remnant of the past and people feel uncomfortable in her presence. They'd rather move away from her.

We use the word 'community' all the time, and we're all used to seeing reports on the television news after some terrible event has taken place. You hear neighbours expressing their disbelief and you wonder about the friends who are standing around, seemingly unable to take it in.

It was the suggestion of Rupert Goold, the artistic director of hugely successful Headlong and a frequent colleague of Mike's, that he direct something for the company and Medea was the result.

Mike: Directing is incredibly difficult, as difficult as writing a play, but I have seen both the craft and the art of directing while in the rehearsal-room. For me, it is a genuine collaboration.

The play feels very modern to me as a story of betrayal and we've talked about the way in which the betrayed have taken their revenge, either throwing your ex's possessions into the street or killing their pets. As the director of Medea, I haven't come into rehearsal and started to tell the actors what to do. Rather we have made discoveries together and if scenes don't work or are overwritten on the page, the actors will tell me and I'll cut or do a rewrite. In a way, it's been script development as well as rehearsal. You feel a very different pressure as a director from the one you have as a writer. You're outside the process or at least you experience it second-hand. As the director, on the other hand, you're in the thick of it and you don't see what you really feel about a show until you see it on stage.