Last night a posse from the Citz travelled to London for a whirlwind visit with one purpose - to catch the opening night of Backbeat at the Duke of York's Theatre. 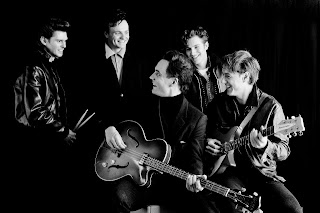 The show which premiered at the Citz in early 2010, has been tweaked for the West End by new Director David Leveaux and opened to a great response last night. Reviews have started to come in:

"nuanced and compelling…the most interesting pop show since Jersey Boys. It likewise not only captures the pulse of what drives its protagonists to make music, it is also even more interestingly about their personalities."
The Stage

"Backbeat about the "lost" Beatle at Duke of York's is a cut above the normal bio musical. Intelligent & a liitle heart-breaking too."
Lyn Gardner (The Guardian) via Twitter

"an exhilarating account of the Beatles – then known as The Quarrymen – in Hamburg in the early 1960s…the hardest, meanest rock ‘n’ roll I’ve ever heard on a West End stage…It’s a beautifully wrought and darkly cynical evocation of an era…For once, you really do feel like dancing in the aisles at the end."
WhatsOnStage.com ★★★★

"The transition to the stage works slickly…Director David Leveaux captures the fizzing energy of this brink-of-change era…Backbeat is a back-story to cherish."
Evening Standard

We know our audience loved this show in Glasgow. Tickets for the London version are currently on sale until March 2012. We'd highly recommend squeezing it in if you're heading to the big smoke, or even creating a wee trip around it.

At the show itself and the glamorous after party, the Citz crew did their best to act cool amongst a rather starry line-up of guests which included David Tennant, Gary Lineker, Hayley Mills, Harry Enfield, Steven Van Zandt, Dave Clark and Dominic Cooper amongst many others. Some of them were even kind enough to allow some photos (...like they had any choice!?).

You can see the rest of our snaps on Facebook or check out some great press shots on wooller.com.